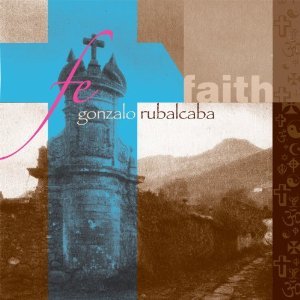 More often than not, jazz musicians move from youthful irreverence to spirituality as they mature. Examples abound, from Dizzy Gillespie to John Patitucci, from Duke Ellington to Wayne Shorter, from Randy Weston to Pete Malinverni, from Mary Lou Williams to Cyrus Chestnut. The fact that jazz can accommodate profound personal growth throughout a lifetime is a testament to its mutability and its spiritual permanence. Now, Gonzalo Rubalcaba, whom many, with reason, associate with musical exuberance and technical exploration, has infused his latest album, Fé…Faith, with meditation, reflection and wonder about beauty and religious belief. Coincidentally, Fé…Faith, which respects worshippers of all faiths, commences a series of planned recordings on Rubalcaba’s own new label, 5Passion.

Fé…Faith is a solo project with no back-up of bass and drums or any other instruments but the piano to speak the melody. That’s not to say that the effects of other instruments are absent, for Rubalcaba recalls batá drums on “Maferefun Iya Lodde Me,” and he orchestrally uses counterpoint with effective results for interwoven richness on “Oro.” Of course, this isn’t Rubablcaba’s first unaccompanied album, for Solo on Blue Note prepared listeners for his explorations on Fé…Faith.

As the listener progresses through Fé…Faith, it becomes apparent that this first composition, “Maferefun Iya Lodde Me,” sets up the feeling for the entire album in more ways than one. For it serves as a centerpiece for fragmented improvisation on other tracks, which feature brief melodic references to it. Plus, “Maferefun Iya Lodde Me” reveals Rubalcaba’s previously not-as-evident affinity for Bill Evans’ use of space and modality. As if such hints weren’t sufficient, Rubalcaba not once, but twice, freely improvises on “Blue in Green,” which Rubalcaba calls “an amazing piece of music.” It is. However, Rubalcaba’s reverent solemnity present in interpreting “Blue in Green” strikingly contrasts with Evans’ almost jubilant swing when he plays the same song with Toots Thielemans on Evans’ Sesjun Radio Shows recording. How ingenious that the first two-note chord of “Blue in Green” is so familiar in any context, evoking its contemplative mood from the start.

As for “Maferefun Iya Lodde Me,” Rubalcaba considers elements of the song in fragments of wonder. “Derivado 1” opens Fé…Faith with but chimes drawn from that longer piece. Rubalcaba’s use of the sustain pedal during “Derivado 1’s” four-note performance reinforces his reputation for careful attention to touch as he strikes the next chord as its predecessor decays.

Rubalcaba too evokes the spirit of Dizzy Gillespie, who first performed with him in 1985 at the Havana Jazz Plaza Festival when Rubalcaba was twenty. “Con Alma,” appropriately translated as “with soul,” appears twice on Fé…Faith as solo meditations upon the experiences associated with the song and the trumpeter. Rubalcaba sets up a rumbling vamp for “Con Alma 1” before it slows into rumination alternating between single-note melody and left-hand single-note interwoven harmony with shifting block chords.

A project of the heart, Fé…Faith includes a connected sequence of musical impressions of Rubalcaba’s three children. Despite the presence of Michael Brecker, Jeff Chambers and Ignacio Berroa on the other tracks, we’ve heard his unaccompanied musical descriptions of his children before on Inner Voyage. How unforgettable is that to have songs created to express a father’s impressions of each child? Now Rubalcaba has updated his interpretations of their personalities matured in the intervening twelve years. There’s “Joan,” depicting Rubalcaba’s son with its primary singable theme offset by staccato bass notes leading into rubato discursive improvisation. Then there’s “Joao,” of darker chords and exposition in the piano’s close middle range, rather than on “Joan’s” higher treble keys. And there’s “Yolanda Anas,” whom Rubalcaba describes as “coquettish, cheerful, mischievous, imposing, loving and rebellious,” and the initial key-changing lullaby, though she’s now fifteen, evolves into thoughtful variations on the theme with rippling effect and reharmonized gentleness.

Even though Blue Note Records no longer releases Gonzalo Rubalcaba’s recordings, he now is in more control of his destiny as he founds his own label and records his initial recording with delicacy and sparseness that belie his prodigious technical prowess. Instead, Rubalcaba looks inward during another inner voyage as he searches for spiritual inspiration and then lets it flow into an album named Fé…Faith.

Next post Grandmaster Bootsy and a night of funk!