Grandmaster Bootsy and a night of funk! 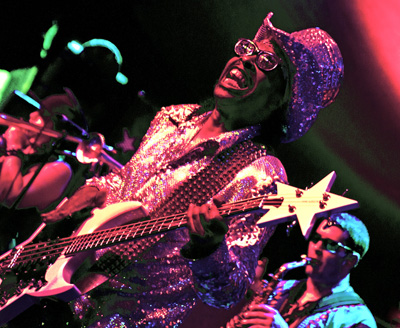 The Alexander Brown Quintet played early in the day while Jayme Stone took to the same outdoor stage on Metro Square for the late afternoon show. Stone and his band played pieces from the Juneau-nominated Room of Wonders album which brings in polyrhythmic sounds based on folks dances from around the world which worked out very well for a relaxing Saturday afternoon.

At the same time over at Quotes across the street, Canadian pianist, composer, and educator, Gord Sheard concluded his third day this week for the festival. Each gig featured a specific artist such as singer Luanda Jones and guitarist Reg Schwager. On this particular day, jazz and Latin flutist Bill McBirnie was the guest before a packed house. Sheard demonstrated his great knowledge of the Brazilian people and the rich musical variety that defines their wonderful culture. Sheard’s group included George Koller on bass, Maninho Costa on percussion, and Mark Kelso on drums. They played a variety of such as samba and bossa novas. Jobim’s “Chega De Saudade” was a good example of a bossa’s relaxing appeal. McBirnie provided the perfect accompaniment to bring out this tune’s full textures. Sheard also used the opportunity to talk about some other styles in Brazillian music. He introduced frevo which is one of the rhythms coming from the north eastern part of Brazil and has been associated with carnival music. As a dedication to Hermeto Pascoal, a composer and instrumentalist, Sheard showcased an original composition performed live for the first time. He described “The Hermetic Arts” as a “syncopated march and samba.”

Back on Metro Square, fans were already lined up for the evening Mainstage show. Due to the volume of equipment and for logistical reasons, the opening act was moved to the outdoor stage which worked out quiet well. Saidah Baba Talibah brought her self-described “raunch soul” style of music to open the evening entertainment.
The Mainstage was ready for some heavy and groovy bass action once Bootsy Collins and his 14-piece band started the big show. From working in James Brown’s band to collaborations with George Clinton and Parliament Funkadelic (P-Funk), Bootsy has continued to bring on the funk to audiences all over the world. This was a show where ear plugs were a good thing while still having fun in the standing-room only section of the tent. The loud opening bass lines paved the way to a funky journey that had most people on their feet all night, even for most of the ones who had secured a seat. To keep the enthusiastic crowd going and while Bootsy was changing into another crazy outfit, the vocalists kept the momentum alive and led the crowd into an organized dance routine. They also were urged to raise their cellphones in the air to mimic torch lights. Yes, cellphones were ubiquitous. The band did quieten things down, for just a brief moment, with “Yummy, I Got The Munchies” featuring duets between vocalists. The act had the structure of a revival gathering as Bootsy talked to the crowd with the music in the background. At one point, he asked that the crowd divide itself into two sections like the opening of the sea. This was just preparation for Bootsy to walk into the crowd and connect with everyone in his path before returning back on stage. The evening ended on an anti-climactic ending as people were expecting an encore. Nevertheless Bootsy and his crew delivered a fun show for fans. Even a JazzFM volunteer who attended a quieter show earlier in the day was genuinely pleased by what she just witnessed.

The last day of the jazz festival is here with quiet a few performances lined up for this lovely Sunday.

Next post Jazz master reflects on a lifetime of musical achievement