Jazz master reflects on a lifetime of musical achievement 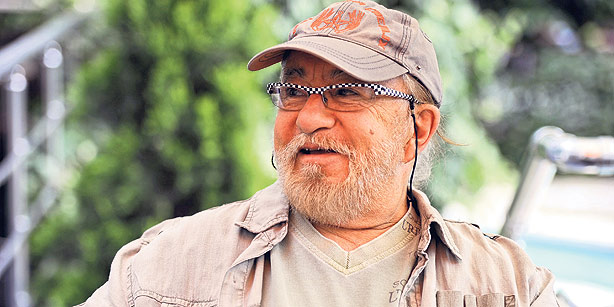 Wandering through the greenery of the well-tended public gardens of his home in İstanbul’s Ümraniye district, jazz percussionist Okay Temiz — a short, nonchalant figure dressed in khaki summer wear — resembles an intrepid explorer more than he does a globe-trotting musician.

Yet the refreshingly unassuming 72-year-old is just that, and with an extraordinary career having spanned over five decades, the creative mastermind is this year’s recipient of the prestigious Lifetime Achievement Award of the İstanbul International Jazz Festival that was presented at the annual event’s opening gala on Thursday night at the stunning Marmara Esma Sultan mansion located along the Bosporus.

Brought up in a musical family with a wealth of inspiration coming from his zany mother, Temiz launched his professional musical career in 1955 having begun to experiment with the making of his own instruments during his student years at the Tophane Art Institute. It was this inclination towards experimentation, evident at a young age, which was to shape the course of Temiz’s success over the next half century. In 1967, Temiz — a self-professed compulsive thinker — upped and left on a whim to head for Scandinavia, where he was to pass the most successful two decades of his musical career.

It was in Sweden, where he lived for 23 years, that Temiz established his popular group Oriental Wind, a multicultural ensemble that rose to international acclaim on the global music scene, bringing together typical European sounds such as the violin, saxophone, flute, bass and piano with Turkish instruments such as the zurna, ney, saz, ud and gayda (Turkish bagpipes) to produce the unique and pulsating sound of oriental jazz. The jazz maestro spent a further five years in Finland, where he met his wife, Anna, before returning to Turkey in 1998.

What makes an honor an honor

Speaking in an interview with Sunday’s Zaman two days before the ceremony, Temiz responds to the mention of his latest honor with vague irritation, “Oh that — yes, I don’t like awards,” he cuts off abruptly as if this is sufficient explanation, then concedes to the obligation to continue: “Well I mean I just hate the fuss. It all comes as very contrived to me. I don’t like going on to the stage and having to make a speech. It’s not my type of thing at all. I got an award in Ankara a few years ago, and I left it there. When the İKSV [İstanbul Foundation for Culture and Arts] approached me about this one, first I said no, give it to someone else — but they insisted, saying you have been so active in the development of an alternative stream of Turkish music, you have contributed so much over the past decades and so on.”

He waves a hand dismissively, then pauses before continuing: “But in the end I decided to accept it because the İKSV is awarding it. The İKSV is a great organization, and most of İstanbul’s successful artists owe it a great debt for the services and support it provides us. More importantly for me, however, is the connection with the former head of the organization, Şakir Eczacıbaşı, who passed away in January of last year. Şakir was a man I held in very high esteem — he did so much for the development of jazz and culture in general in Turkey, so in honor of him I will of course be accepting the award.”

What Temiz sees as important, he continues, is who is giving the award. “Who is offering me the award, and what do they know about me and my music — this is what really matters to me. Sometimes you get these silly invitations for awards that specify you are to bring your instruments, and really they just want a free concert out of you, and they will offer you some trifling prize at the end. I fell in that trap once, and I have been careful to avoid such situations since,” he adds darkly.

The best indicator of success, Temiz submits, is undoubtedly how much enjoyment he himself gets out of the work. “If I can be proud of it — that is the best reward. This is of course rare however,” he concedes stanchly, pushing his trademark checked black and white glasses up his nose before adding, “But all creative people are the same — artists, painters, poets, musicians, dancers — most of us look back on our old work and think, ‘Ahhh, what the hell is this?!’”

The power of rhythm

Upon returning to İstanbul in 1998, one of Temiz’s biggest projects was the setting up of his Rhythm Workshop, where he gives music lessons in Kuledibi in the buzzing Galata area of Beyoğlu. “I am a great believer in the power of rhythm to heal people — rhythm has a lot of power,” he says, reflecting for a moment before adding: “Some of the best effects of rhythmic training I have seen were in a project I did for years in Sweden. We would go into hospitals and disabled homes and work with patients, many of whom would have movement disorders where they would shake or tremble compulsively. When we put drumsticks in their hands it would be a way of channeling this shaking into something productive, and the results were fantastic — the families of the patients would hug me and cry and thank me profusely. It was the first time anything like this had been done, so it was very important.”

Returning to the subject of his İstanbul-based rhythm school, which continues to flourish today, Temiz contends that rhythm could greatly help a lot of people if only they would give it a chance. “I have surgeons coming in, I have lawyers, teachers, highflying businessmen, yet when they come to my workshops, everyone is united — employee sits alongside employer, and we are united by the rhythm. People use it as an escape route from the stress of modern day, big city life, to get away from family, work, relationship stress, whatever.” He waves a hand wildly, and says: “They arrive unhappy and stressed, and they leave happy — it is as simple as that. Two hours and it clears the head and the soul — escapism — that is what it is.”

Reflecting on other important projects since his return to Turkey, Temiz explains that he usually focuses on working towards making more isolated or niche lines of music more accessible to more people. “Mehter music, for example!” he exclaims, referring to the music of the old Ottoman military bands. “I love Mehter music but obviously it has an association with war, war perhaps with neighboring countries. So what I did was to get musicians from all over the world, from neighboring Greece and Bulgaria as well as Russia, Finland, Sweden and Senegal and then take away the aggressive tone of the music to make it more musical — in effect changing the tune of the Mehter.”

Did this go down well? “Well,” he ponders before continuing: “Because it was underground and alternative it did not appeal to the masses. However, I am sure that if a more popular mainstream artist, for example, Sezen Aksu, did such a project — it would be huge! In saying this, however,” he adds, “I would get young headscarved women attending these concerts and at the end they would come and embrace me — even though such a thing is not customary for more religious types — and they really liked it because it was something different, away from the seedy pop music yet still traditional and nationalistic.”

“There was also then the work with the symphony orchestras,” he continues. “This was and still is very important — you have the likes of the İzmir, Samsun, Adana, Ankara symphony orchestras, and all of these use my combinations mixing blends of sufi, Latin, Anatolian, jazz, electronic, Balkan and acoustic sounds with traditional classic pieces. This was a first for this kind of thing, and it made the sound more attractive and melodic, getting the young people interested in such orchestras that can often have a boring, very rigid, classical stereotype.”

Escape from the city

Living with his family in the outskirts of the Asian side of İstanbul, Temiz is away from the hustle and bustle of İstanbul’s cultural center; was that a purposeful decision? “Yes,” he snaps with vague irritation, “İstanbul is mad, there is no peace, no breathing space no matter where you go — no köy [village] will help you here,” he chuckles to himself, then adds accusingly: “It is all the same, upside down. One day a week in the center, and you get enough stress for a week. Tourists come and fall in love with places like Galata and Taksim and Beyoğlu, but these are not the kinds of places you can settle in and be peaceful — they soon learn.”

So where does Temiz consider an ideal living quarter? “Well,” he considers, “you need to be close to nature — that has always been my ethos. I had a rural upbringing in Çatalca, where I was brought up on a huge 1,000-hectare farm, so I am used to that. In Sweden I was fortunate. I found a lovely old house on the edge of a forest and it was so wonderful and very inspiring for my work. I have a lot of natural influences in my music, and I take a lot of [pleasure in being in] nature, a big city environment is no good for creativity. Though at the end of the day,” he says thoughtfully, “my

Previous post Grandmaster Bootsy and a night of funk!