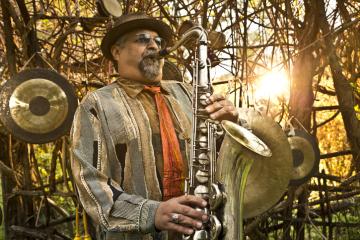 Led by Berklee professor and saxophone virtuoso Joe Lovano, the Berklee Global Jazz Ambassadors are taking one of jazz’s most seldomly performed works to the stage at

Dizzy’s Club Coca-Cola in New York and the Monterey Jazz Festival in California. The Jazz Ambassadors, six students from Berklee’s prestigious Berklee Global Jazz Institute, will join Lovano in performing John Coltrane’s Interstellar Space. Though it was originally recorded primarily as saxophone and drum duets, Lovano and his students have reimagined Interstellar Space for sextet and will perform it during the week prior to Coltrane’s birthday, which is September 23.

The group’s first performance will be at Dizzy’s Club Coca-Cola, 10 Columbus Circle, New York, on Monday, September 16, 2013 at 7:30 p.m. Tickets are $35 or $10 with a valid student ID. The show is part of Jazz at Lincoln Center’s Coca-Cola Generations in Jazz Festival, which showcases an array of up-and-coming musicians alongside some of today’s most established jazz masters.

On Friday, September 20 at 8:00 p.m., the group will perform at the Monterey Jazz Festival on the festival’s Garden Stage. In addition to leading the Berklee group through Interstellar Space, Lovano is serving as the festival’s artist in residence and will perform with several other groups throughout the weekend.

Led by Grammy Award-winning pianist Danilo Pérez, the Berklee Global Jazz Institute represents the next generation of jazz stars. Pérez designed the institute to combine musical humanitarianism with radical new ways to incite musical creativity. Pérez once led the group of elite international students to the Panamanian jungle to interpret forces of nature, resulting in a jam session so primal it charmed a nearby cobra. In Boston, they visited a penitentiary to perform an inmate’s poem set to their music.

A training ground for artists seeking to evolve to the highest levels—both as musicians and human beings—students in the institute are taught by masters like Wayne Shorter, Joe Lovano, and Terri Lyne Carrington; perform at world-renowned festivals; and give back through musical community service.