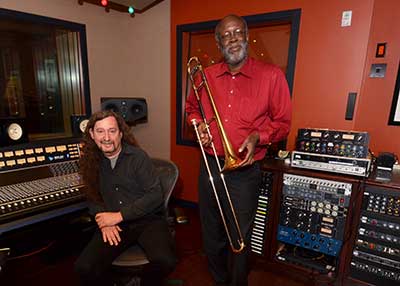 “Salsa De La Bahia,” the much anticipated celebration of San Francisco’s vibrant and vital Salsa/Latin/Jazz scene has been completed at Studio Trilogy. The project was helmed by producer and celebrated trombonist Wayne Wallace, and recorded by Gary Mankin.

The new album is the musical companion to the upcoming film documentary “The Last Mambo,” directed and executive produced by Rita Hargrave, which traces the 60+ year evolution of the West Coast Latin sound, a potent gumbo of Afro-Cuban rhythms, jazz harmonies and funk infused grooves. “Rita and I chose the songs with the idea of this CD being a dance record that showed the musical diversity of what the Bay Area scene has to offer,” explained Wallace.

Wayne Wallace’s credits include being musical director of the Pete Escovedo Orchestra, John Santos & The Machete Ensemble, and Conjunto Cespedes as well as sideman gigs with luminaries like Tito Puente and Manny Oquendo & Libre.

The musical spectrum of “Salsa De La Bahia” shows the kaleidoscope of Afro-Latin musical colors seen and heard around the Bay Area. Complimenting this rich collection are three original pieces recorded at an all-star session at Studio Trilogy. “Everyone understood that this was an opportunity to make a collective musical and artistic statement about the music we have played for years,” commented Wallace. “We spoke of the lineage of Cal Tjader, Carlos Federico and the many musicians who helped create this music.”

“It is significant to remember that this music is an essential part of the forward-thinking Bay Area community,” added Wallace. “In the early 50s, the San Francisco mambo/salsa scene pre-dated the integration of the 60s and welcomed a diversity of races and cultures at the nightclubs and concert halls. Without this musical and cultural phenomenon you wouldn’t have had a Santana and the Latin rock scene.”

“Not only did we have a festival of great musicians at Studio Trilogy, we had the support of a studio staff that is top drawer,” commented recording engineer/producer Gary Mankin, whose discography is a who’s who of Bay Area luminaries. “The ambience at the studio was perfect for this project, family style where everyone felt comfortable and at home, but always very professional.”

To view sessions at Studio Trilogy for “Salsa De La Bahia” and learn more about the film project “The Last Mambo,” visit: http://thelastmambo.com/store

Designed by John Storyk , Studio Trilogy features Northern California’s only 80-channel SSL 9000K mix console with Ultimation. The tracking suite is outfitted with a 32-channel API 1608 and the post-production suite features a Digidesign ICON D-Control. Included is a prize collection of microphones, plus a full complement of vintage and modern instruments. An onsite 1200 sq.ft. luxury apartment with media lounge and chef’s kitchen is also available.