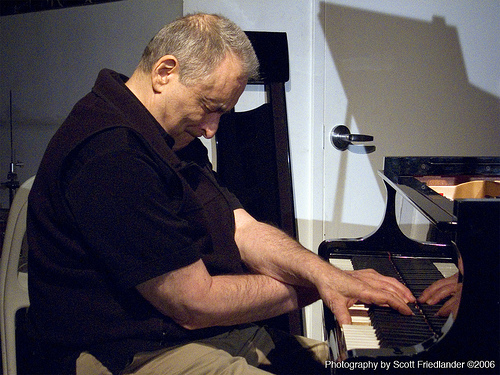 A memorial for Borah Bergman will be on Monday, April 15th, starting at 7:30pm, at Saint Peter’s Church, located at 619 Lexington Avenue (corner of East 54th St.).  We will celebrate his life and outstanding, original contributions to the art of piano improvisation. For more information, contact: Jason Kao Hwang, jkhwang@me.com. The Saint Peter’s Church phone is 212 935 2200.

He had a dream that to be an extraordinary pianist you had to do something that no one else could do. As he said, “I knew there was no point in sounding almost as good as Bud Powell.” After years of relentless practice and single-minded intensity, he was able to teach his left hand to play everything his right hand could. This resulted in an extraordinary ambidextrous technique that Borah often humorously referred to as friendly “hand-to-hand combat.” He also developed a crossed hands technique, which gave him an innovative and nuanced approach to improvisation. In the end, he was able to achieve his goal.  He made more than two dozen solo and ensemble recordings, receiving critical acclaim in Europe, Asia and here at home. He has collaborated with Andrew Cyrille, Evan Parker, Roscoe Mitchell, Thomas Buckner, Oliver Lake, Hamid Drake, Peter Brotzman, Thomas Borgmann and many others.  He can be heard on numerous labels, including Soul Note, Tzadik, Knitting Factory, Chiaroscuro and Muworks labels. A partial discography is below.

To know Borah was to be challenged, provoked, entertained, awed and ultimately inspired. He will be missed by his family, friends and loyal admirers around the world.

If you have anything (pictures, letters or writings) from Borah that you would like to share/give to the family for a memory book, please bring them to the Memorial to give to Erma or Sue Kranz, Borah’s sister and niece.