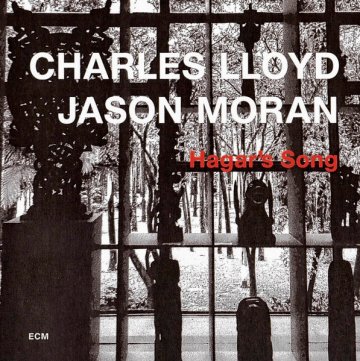 Looking back at Charles Lloyd’s sizable discography as a leader, what’s becomes immediately clear is that the saxophonist has shared a number of special, long-term musical relationships with pianists: first, Keith Jarrett, in the quartet that brought Lloyd considerable fame and commercial success in the 1960s; and then Bobo Stenson, when he returned from nearly two decades of relative inactivity as a leader (some of it spent recording and touring with The Beach Boys) and began an association with ECM Records that continues to this day. His first five ECM albums—from 1990’s Fish Out of Water through to the particularly strong Canto (1997)—will, in fact, be reissued later this year as part of the label’s Old & New Masters Edition series of box sets, documenting in once place Lloyd’s particularly fertile collaboration with Stenson and, on four of the five recordings, fellow Swede and longtime Stenson Trio mate, bassist Anders Jormin.

Since 2007, Lloyd has been working with Jason Moran, a younger pianist with a discography of his own, but one largely overshadowed by his collaborations with others, in particular with Lloyd but also with Paul Motian on Lost in a Dream(ECM, 2010), with an exceptional nascent trio cut short, sadly, by the drummer’s passing in 2011. On three recordings—2008’s Rabo de Nube, 2010’s Mirror and his ambitious marriage of the quartet with Greek singer Mari Farantori, 2011’s The Athens Concert (ECM, 2011)—Lloyd has now retained a consistent lineup longer than any previously documented. With Hagar’s Song, Lloyd now further explores his relationship with Moran in a stripped-down duo setting that might actually eclipse their undeniably fine work together in the quartet.

In a set that runs the gamut from well-known standards by George Gershwin, Billy Strayhorn and Duke Ellington to relatively more contemporary fare from Bob Dylan and Brian Wilson, Lloyd and Moran demonstrate the kind of empathy and trust that only comes from considerably time spent together. There are some spiritual and aesthetic similarities to Lloyd’s deeply personal Which Was is East (ECM, 2004), recorded with Billy Higgins at the saxophonist’s home just a few months before the drummer’s passing; but here, with Lloyd playing just saxophones and flutes, and Moran focusing solely on piano (with the occasional injection of tambourine), there’s a greater intrinsic focus, albeit with a similar spirit of adventure.

These aren’t in any way literal readings; instead, there’s a clear sense of discovery as, at the beginning of Gershwin’s “Bess, You Is My Woman Now,” Moran’s playing unfolds slowly, from a single note to fifths, with additional notes added to his voicing that mirror Lloyd as the saxophonist returns the favor, the pair pushing and pulling each other rhythmically, melodically and harmonically—here, and throughout the record. Contrasting this pensive reading is Ellington’s enduring “Mood Indigo,” where Moran’s introduction sets up a somewhat more reverent but equally unfettered performance that suggests there may be structures here, upon which the duo hangs its collective hat, but they’re little more than roadmaps. And if Lloyd, on occasion, jumps into a free-associating, stream-of-consciousness mode of approach, then Moran is right there with him, shifting from hints of stride to sparer accompaniment and more densely aggressive passages at the drop of a hat.

At the center of the 69-minute set is Lloyd’s five-part nearly thirty-minute “Hagar Suite,” which references the multitude of touchstones that have long been a part of Lloyd’s music and reflects the saxophonist’s own diverse lineage. The meditative a cappella bass flute that opens “Journey Up River” reflects Lloyd’s partly Native American blood line, but when Moran enters with a pedal tone-centered accompaniment it slowly assumes trace elements of blues and middle eastern concerns/ Lloyd pulls back to allow the pianist to come to the fore—even as Moran injects the occasional sharp dissonance for tension—before resuming, layering darker lines that lead to a soft but unexpected pause from both players, as a change in key shifts first to a more positive vibe, but ultimately turns to darker territory once again.

Moran’s intro to “Dreams of White Bluff”—like his work throughout the entire set—suggests that it may well be time to consider a solo piano recording to follow up Modernistric (Blue Note, 2002), as his prowess has, through his relationship with Lloyd over the past five years, truly grown in leaps and bounds. The only other pianists of his generation to demonstrate such similarly encyclopedic knowledge of traditions both in and out of jazz, while applying them to thoroughly modernist contexts, are Brad Mehldau and, notably, Craig Taborn, whose own solo piano recording for ECM, Avenging Angel (2011), was the kind of culmination and consolidation for which Moran—with a significantly larger discography as a leader that still doesn’t suggest his true potential the way his work with Lloyd has—appears well and truly ready.

If Hagar’s Song is a revealing record for Moran, it’s equally so for Lloyd who, as he approaches 75 in March, 2013, has simply never sounded better. His soft, buttery and immediately recognizable tone, and an ability to create flurries of sound that contrast with the tarter sheets of sound of an early influence, saxophonist John Coltrane, are combined with a more melodic bent that’s still unafraid to skew into more angular terms, as he does on the curiously titled “Alone,” the third part of “Hagar Suite,” where he does, indeed, begin alone on alto flute, but is joined, mid-way, by Moran—first on tambourine but then on piano, as he lays it down on the strings to resonate—who gradually introduces tension-building chords over the pedal-tone ostinato that segues into “Bolivar Blues,” the album’s most jagged track, as Lloyd turns to alto saxophone.

Despite a career that was already well-established when he was recruited by Lloyd, following Moran’s progress with the saxophonist over three group recordings, and now this outstanding duo recording, also demonstrates that as much as Moran has benefited from the partnership so, too, has Lloyd. There’s little that’s predictable about either player, but with Hagar’s Song—imbued, as it is, with constants of surprise, simpatico and stellar performances—both Lloyd and Moran have made the leap to a new plateau. It’s territory that will, no doubt, be further reflected and explored in future quartet recordings, but has been laid beautifully bare in the more naked context of what is, indeed, a truly exceptional duo recording that stands as one of Lloyd’s finest in a career now well past the half-century mark.

Next post CD Release: Norman Johnson "Get It While You Can"