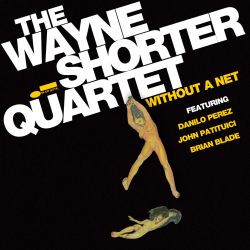 Wayne has re-signed to Blue Note Records, and has released his first album as a leader for the iconic label in 43 years with the release of Without A Net, a searing new album with his long-running quartet featuring pianist Danilo Perez, bassist John Patitucci, and drummer Brian Blade.

Without A Net is a 9-track musical thrill ride that consists of live recordings from the Wayne Shorter Quartet’s European tour in late 2011, the one exception being the 23-minute tone poem “Pegasus” which features the quartet with The Imani Winds recorded at Walt Disney Concert Hall in Los Angeles. The album features six new Shorter compositions, as well as new versions of his tunes “Orbits” (from Miles Davis’ Miles Smiles album) and “Plaza Real” (from the Weather Report album Procession). The quartet also reinvents the title song from the 1933 musical film Flying Down To Rio, which film buffs know as the first on-screen pairing of Fred Astaire and Ginger Rogers.

“Wayne Shorter is one of the greatest musicians and composers of our time,” said Don Was, President of Blue Note Records. “At age 80, we witness him at the height of his powers and performing with one of the most incredible bands he’s ever assembled. Although welcoming him back to Blue Note Records after 43 years is a romantic notion, Wayne’s enduring appeal is rooted in his steadfast refusal to trade in such nostalgia. In fact, it is Mr. Shorter’s determination to constantly move forward that makes his new album, Without A Net, such an essential listening experience.”