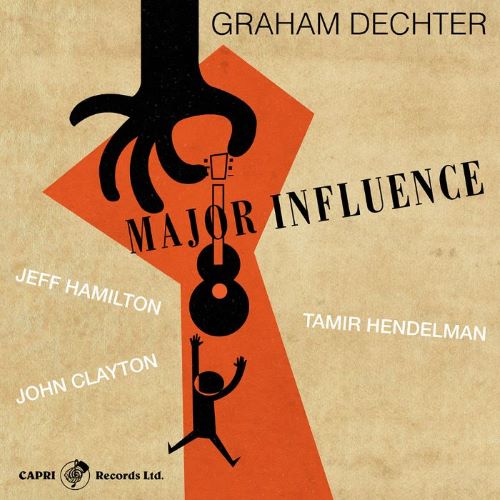 Amid an abundance of first-rate young jazz guitarists, Graham Dechter’s third album, Major Influence, with its swinging irresistibility, provides another reason for his broader recognition.

Influenced by a previous generation’s straight-ahead guitarists like Herb Ellis, Barney Kessel, Wes Montgomery and Grant Green, Dechter’s performance on Major Influence projects not only a thorough knowledge of jazz history, but also his own joy in playing music.

In fact, John Clayton and Jeff Hamilton have been important in establishing Dechter’s musical career by asking him to join the Orchestra when he was but nineteen years old, its youngest-ever member. With constant dedication to a vast abundance of musical influences who aren’t guitarists, like Oscar Peterson, Charlie Parker, B.B. King, Ray Brown, Duke Ellington, Art Blakey, George Coleman, Nat Cole, Lee Morgan and Thelonious Monk, Dechter’s musical vocabulary has grown to provide a firm command of jazz language that infuses his playing, even as he has established his own personal style.

While Dechter’s previous albums have included numerous standards along with pieces written by his friends, his compositional skills and melodic/harmonic strengths have set up more personal musical statements on Major Influence, an album on which Dechter acknowledges his jazz influences. No doubt, Dechter’s familiarity with Clayton’s and Hamilton’s skills at arranging for their Jazz Orchestra contributed to his own imaginative arrangements for the album. Just one standard, Leslie Bricusse and Anthony Newley’s “Pure Imagination,” appears on the album. The same musicians/friends appear on Major Influence as they did on Dechter’s previous albums: Tamir Hendelman on piano, John Clayton on bass, and Jeff Hamilton on drums.

Major Influence being recorded in 2018 before “pandemic” became a household word, Capri Records is releasing the album now that live performance opportunities are starting to open up again. Still, one wonders, or at least I do, why a major talent like Dechter has recorded so few albums—only three—within twelve years. To think of the pleasure that those additional albums could have provided for guitar enthusiasts! And for any enthusiast who appreciates jazz masterfully performed.

“Reference” starts as a splashing call-and-response with Clayton, while Hamilton provides the danceable accented rhythm. Hendelman adds a bass-clef vamp and block chords to the mixture of subtle samba, jazz and swing references.

The more obvious influences include Charlie Parker with Dechter’s “Moonithology,” which combines the “Ornithology” allusions with a unison block-chorded George Shearing style accented by Hamilton’s brush work.  “Bent on Monk,” sure enough, slips some bent guitar notes into a quirky, swinging, initially unison guitar/piano tribute to Monk. The track is notable for Dechter’s interlude between choruses with phrases from “Rhythm-A-Ning,” the three-note accent from “In Walked Bud”—and with the melody from “Criss Cross.” Of course, Hendelman, with his confident touch on the piano, throws in Monk quotes throughout the track as well, during both his improvisation and his accompaniment. The ending of the performance is notable as all four musicians alternate two measures of melody each, Hamilton having tuned his drums for the occasion.

Major Influence ends as it began, with a high-energy, fast-paced—well, a very fast-paced—piece, “Billy’s Dilemma.” It provides evidence of how connected is this quartet in musical mutual understanding as they charge through a burner with flawless execution, both in unison or in solos.

Imagine that the pandemic is defeated, or that it never existed. Imagine a packed audience. The audience, without a doubt, would be shouting, “More!” to demand an encore.