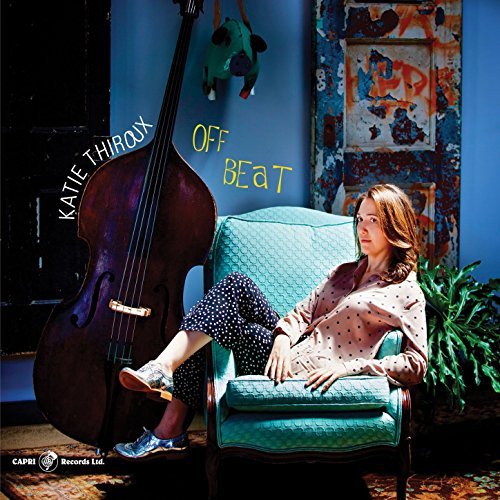 Katie Thiroux, having received heaps of praise for the quality of her first recording, now has released her second. Off Beat is much in the same spirit as 2015’s Introducing Katie Thiroux, but her most recent album provides further evidence of the depth of her talent.

As a bass player who has performed already with many top-tier jazz performers, Thiroux couldn’t have planned the upward spiral of her jazz career any better than the way it fell into place. Without much fanfare, the number of female jazz bassists/singers has expanded, most notably with Esperanza Spalding’s rapid rise to much acclaim from an eager-to-learn-more prodigy to a Grammy Award-winning Harvard professor of music. But then, there are also Kristin Korb, Tal Wilkenfeld, Me’Shell Ndegeocello, among others, each with her own distinctive style and spirit. Thiroux has firmly maintained her own effervescent spirit too, as her sense of swing, an apparent extension of her cheerful personality, has come to characterize the constant in her style.

That allegiance to swing has guided Thiroux from the beginning. Her apparent straight line of musical development has grown to include influential acquaintances, important opportunities and engaging musical discoveries.

Off Beat is squarely on the beat throughout many of the album’s tracks as Thiroux grounds her trio, plus the occasional addition of reeds, with a solid sense of swing that attests to her musical confidence. The offbeat element of Off Beat isn’t the beat itself; it’s Thiroux’s shrewd and informed choice of songs.

The first of those songs is the title track by Leon Pober of “Tiny Bubbles” fame. Not only does Thiroux show a keen appreciation for the career of June Christy, who recorded the now obscure 1960 Off Beat album, but also it sets up the quirky, liberating, joyous tone of Thiroux’s Off Beat album. Thiroux’s expansive knowledge of swing music suggested bringing in Ken Peplowski on clarinet and Roger Neumann on tenor sax (perhaps paying their own tributes to Bud Shank and Bob Cooper) at a faster tempo than Christy’s.

With the exception of the frequently heard “Willow Weep for Me,” Thiroux’s album consists of a rediscovery of clever and/or heartfelt songs. In a vein similar to “Off Beat’s,” “Some Cats Know” takes its cue from another of the cool jazz singers, Peggy Lee, though Leslie Uggams first recorded the song seven years earlier. Again, Peplowski adds his own between-the-phrases tenor sax commentary, while Thiroux pursues her own Lee-istic vocal expression of tongue-in-cheek worldly wise ennui while accompanying herself with the distinctive bass lines that Jerry Lieber and Mike Stoller wrote. Frank Loesser’s “Brotherhood of Man” from How to Succeed in Business without Really Trying presents the strength of Thiroux’s own trio in hard-swing mode as a showcase for herself, pianist Justin Kauflin and drummer Matt Witek who individually solo with second-line extroversion.

Even Thiroux’s inclusion of a Duke Ellington composition goes off the beaten path. Instead of Ellington’s often covered jazz tunes like “Take the ‘A’ Train” or “Caravan,” Thiroux slows down from upbeat swing to have Peplowski and Neumann harmonize and trade phrases on Ellington’s “Happy Reunion,” as a tribute to Paul Gonsalves, not to mention Kauflin’s tribute to Ellington’s gorgeous fully chorded vamp. Similarly, Thiroux finds an infrequently played Frank Sinatra gem, “When the Wind Was Green,” instead of including a song that the entire world associates with him. Sinatra’s inherent swing in his voice whenever he sang provided the feeling for Thiroux’s thoughtfully delivered bass-and-voice version, unlike Dominique Eade’s slower, sultrier, more melancholy style honoring Chris Connor’s 1956 version. Instead of sustaining the final notes of each melodic segment, Thiroux sings in distinct phrases, allowing for her strolling bass lines between them.

Once again, Thiroux performs a tune associated with one of her major inspirations, Ray Brown, who also magnified the success of any group he joined with solid swing and groove and whose style influenced Korb’s as well. Instead of contributing her own composition, as she did with the exuberant “Ray’s Kicks” blues on Introducing Katie Thiroux, she goes way back in the Ray Brown discography to scat on “Ray’s Idea,” the 1946 bebop standard unforgettably performed by Dizzy Gillespie. Thiroux takes on the bass and voice duties, while Peplowski takes flight with a spirited clarinet solo.

Thiroux’s original composition on Off Beat, though, doesn’t surge with her bass’s subtly propulsive force, as do some of the album’s other tracks. Instead, she takes a more medium-tempo romantic, though blues-drenched, approach with “Slow Dance with Me,” performed by Kauflin’s block-chorded melody. As he gradually builds intensity throughout the tune’s development, broken only by Thiroux’s two-chorus solo of but 53 seconds, “Slow Dance with Me” evinces Thiroux’s matured group leadership as she steps into the background on her own composition to feature the other two members of her trio.

Continuing the upward ascent of her jazz career, Katie Thiroux provides even more delights on Off Beat as she affirms the continuing brilliance of past jazz masters with contemporary freshness. At the same time, she reveals the thrills of the rediscovery of jazz treasures hidden in plain sound.  Well, maybe the sound isn’t so plain after all; it’s been right before our ears all these years. It’s off beat.

Next post Tom Harrell Quartet at the Vermont Jazz Center