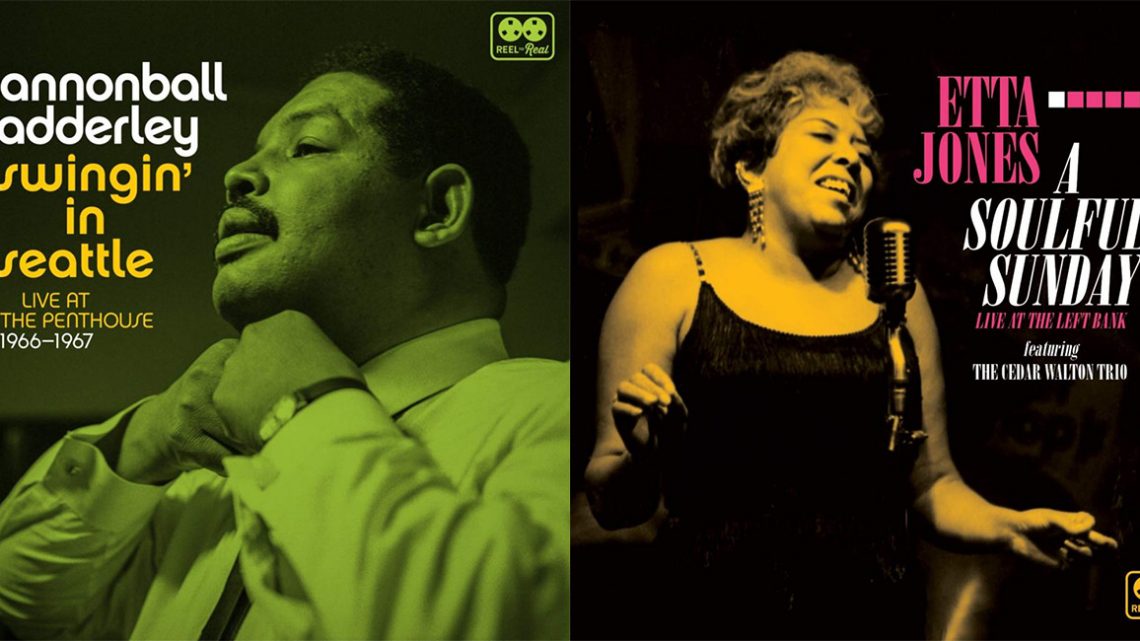 It’s not every day that a new recording label comes along. Online availability of new music has taken care of that. But now, at the start of a new year, a new recording label has gone back to the future by packaging previously unreleased live recordings from a more than fifty years ago. Reel to Real Recordings, founded by Vancouver musician and producer Cory Weeds and by tireless archivist and producer Zev Feldman, has begun its existence, and they have realized their ambitions, by releasing two lavishly created albums.

Cannonball and Nat Adderley remind listeners once again of their irresistibility when they performed with spontaneous interactivity before exhilarated audiences, their soulfulness documented especially by their live recording of “Mercy, Mercy, Mercy.” Feldman and Weeds were just as eager to release a concert recording by Etta Jones, backed by Cedar Walton’s trio. During this performance, they too connected with jazz enthusiasts, but in another kind of venue where casual audible feedback was not only allowed, but encouraged. The special environments for both recordings put the groups at ease. Their immediate appreciation from those in the rooms, fortunately preserved, set up the circumstances to make memorable the performances. The music that excited jazz celebrants can be heard on the Adderleys’ Swingin’ in Seattle: Live at the Penthouse and on Jones’ A Soulful Sunday: Live at the Left Bank. Those recordings recall how the Adderleys and Jones effortlessly reached people’s souls.

The serendipitous partnership of Feldman and Weeds, so beneficial to listeners, is perfectly matched, though they live in separate countries, for they share a passion for recovering hidden recorded gems of jazz recordings by influential jazz icons. Fortunately, their determination and resources have led to the uncovering of numerous recorded masterworks. These two albums are just the beginning of Reel to Real releases. As a result of their years of immersion in jazz, Feldman and Weeds had contacts who could help them create worthy keepsakes that combine the recordings with printed documentation. Each of the albums contains 28-page booklets with photographs, poster reproductions, reminiscences, essays and interviews that add value beyond the music.

In each case, Feldman had found a treasure trove of unreleased recordings from opposite U.S. coastal cities. The Adderley recordings were made at Seattle’s Penthouse Jazz Club, from which DJ Jim Wilke broadcast live performances on radio station KING-FM.  Wilke kept those recordings, one of which found a home at Reel to Real Recordings. In Baltimore, Vernon Welsh of the Left Bank Jazz Society had recorded over 800 live jazz events at the Famous Ballroom, which Morgan State University stored. Label M, Prestige and SteepleChase Records released some of those recordings. But there were more. In 2016, John Fowler, who manages the LBJS archives, learned that even more tapes had been stored in a closet. The Etta Jones/Cedar Walton Trio reel-to-reel tape was part of that cache.

And now both historic performances are available for everyone.

Feldman and Weeds, a saxophonist, were particularly excited about the 1966-1967 Seattle tapes because they include all of the musicians who recorded on the Adderleys’ most famous recordings: namely Cannonball Adderley on alto sax, Nat Adderley on cornet, Joe Zawinul on piano, Victor Gaskin on bass and Ron McCurdy on drums. The album provides the atmosphere of a sixties live radio performance as it was happening, so rare today, with Wilke’s introduction—not to mention Cannonball’s educational introductions. The music starts with Gaskin’s bass lines, as if, as in West Side Story, something’s coming, something good. And something good does come, as each of the musicians joins to accomplish immediate fullness of sound and fast-out-of-the-gate propulsion, with no hesitation. Even from the beginning, the concert burst forth with characteristically unrestrained solos. Eventually, things calm down with, yes, a West Side Story song, “Somewhere.” Cannonball’s attention to tone, dynamics and emotion proves once again that he was a wordless story-teller, even when playing at the song’s largo pace. Swingin’ in Seattle makes clear that Zawinul’s immersion in the Adderleys’ artistic ethos extended beyond his composition of “Mercy, Mercy, Mercy.”  Zawinul’s vamp commencing “74 Miles Away” lays the groundwork for Cannonball and Nat’s expressive improvisations in a modal structure that allows the piece to continue as long as desired without the repetitive chordal form of song. In addition, the 1967 broadcast, and the album itself, concludes with Zawinul’s forceful “Hippodelphia,”which the quintet played without cutoff due to time constraints, as was the case on Mercy, Mercy, Mercy! Live at The Club. How fortunate was that concert’s lack of commercial interruptions or broadcast endings.

Radio airwaves weren’t a concern for the Left Bank Jazz Society’s recordings. So passionate was Welsh, a car salesman, about jazz that he never ran out of tapes. In the days before the Internet allowed infinite digital musical storage, Welsh kept storing in odd places, or in plain sight, hundreds of LBJS tapes. Fortunately enough for Feldman and Weeds, yet another closet full of Welsh’s tapes were discovered in 2016. Weeds, already thrilled by the availability of the rare Adderley tapes, found more reason for excitement when Feldman mentioned the existence of the tape by Jones and Walton, two of Weeds’ favorites. Perhaps due to her kindness that inhibited ambition or due to the vagaries of the jazz recording industry, Etta Jones too often was overlooked by jazz collectors. Nonetheless, she served as an important influence for better known singers like Nancy Wilson and Catherine Russell, who recalls her fondness for Jones’ music in the album’s booklet.

Jones flew in for a single engagement at the Famous Ballroom on February 27, 1972, during a lull in her career. As a result, A Soulful Sunday attains importance as documentation of Jones’ singing abilities at a time when she wasn’t being recorded commercially. And sing she did! The Cedar Walton Trio (with no less than Sam Jones and Billy Higgins) started the concert with a crisp, coruscating ten-minute version of the theme from Love Story, which alternates between vamp-driven choruses and one that swings. Then, after Welsh’s introduction, Jones took command of the stage with “Sunday,” providing an alternative perspective to Walton’s sparkling piano work by bending the notes and making the song’s story her own. A hit with the Baltimore audience, the no-nonsense Jones fit in with her eager fans who came there after church with their own bottles and home-cooked food to mingle with jazz legends, who were paid on the spot. Apparently invigorated by the atmosphere there, Jones didn’t hold back as she infused each song sincerity and extroversion, as if she were “singing to the back of the theater.” In addition, Jones added a sense of drama to her music, like her dynamic build-up and trilling of  notes, as on “If You Could See Me Now.” Walton’s trio projected a swinging accompaniment on “Exactly Like You” and “For All We Know,” allowing Jones to remain in the spotlight. Still, the rhythm remained unwavering as Jones wavered her notes and extended them for full value, instead of relying on rests between the lyrics’ phrases. Like Nancy Wilson, Etta Jones proved by performance that the story behind the song is what makes the song memorable. In the moment, Jones sang as an outpouring of the emotions she felt. Jones took Leonard Feather’s “Blow Top Blues” to a higher level of meaning and intensity, for example, as she developed the narrative, through her trademark quarter tones and soulfulness, about a woman who reached the limits of her patience, and perhaps her sanity. Inhabiting the character within the song, Jones delivered the “bad news” (repeated ten times as a chorus of thoseo two words) that she “woke up in Bellevue and left my mind behind.” Jones concluded the LBJS evening with her most famous recording, “Don’t Go to Strangers,” before flying back to Chicago.

Not long after her Baltimore concert, Jones’ career rose again when Muse Records started to record numerous Etta Jones albums for the rest of her life. Just as important, Jones started touring in the same time period with Houston Person, who also was an important presence in Jones’ life and whose interview is included in the booklet accompanying A Soulful Sunday.

And now Swingin’ in Seattle and A Soulful Sunday have been packaged with painstaking care by two respectful producers who derive joy by providing joy to other jazz enthusiasts.

No doubt the Adderleys’ quintet, the Cedar Walton trio and Etta Jones would be gratified by the attention they are receiving a  half century later.