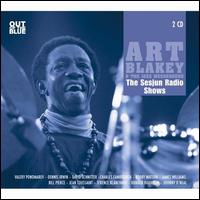 Jazz listeners who continue to enjoy the music of the innovators of the genre—but who bemoan the fact that no new recordings are available after their music-making stopped—will appreciate the fact that Naxos once again is releasing for thrilled enthusiasts previously unreleased recordings of jazz groups. Over the past few years, Naxos received much acclaim for its Jazz Icons series of video DVD’s that provided numerous opportunities to view jazz artists in their prime as they toured Europe. This time, Naxos, true to its mission of making available newly discovered jazz recordings, is distributing in the United States a series of CD’s that make public there for the first time recordings of musicians playing on the Dutch radio show, Tros Sesjun. The second release in the series features two generations of Art Blakey’s Jazz Messengers from 1978 and 1983. (The first CD highlighted Chet Baker’s work on the same radio show.)

While Blakey is celebrated for the consistent force and cohesion of his succession of bands, one of the delights of The Sesjun Radio Shows recordings is hearing in their youth now-matured jazz musicians as they reveled in the privilege of being a Jazz Messenger. Terence Blanchard, now of course an influential band leader in his own right as well as a film composer and orchestrator, ignites fire and injects ferocity less frequently heard in his more recent recordings. Still, Blanchard’s precision and sense of shaping a solo prove themselves as innate characteristics as he builds his improvisation on “Little Man” from soft to loud, from delicacy to aggressiveness, from minimalism to flurries of notes, from exacting articulation to smears. And it’s a pleasure to hear Bobby Watson, always an invigorating alto saxophonist with an innate feeling for lyricism, wailing and bending notes on “Dr. J” with the crackling vibrancy of restless energy.

The Sesjun Radio Shows also reminds us of the exhilarating talent of former Jazz Messengers no longer as prominent as they, such as Valery Ponomarev or David Schnitter. Ponomarev sounds particularly crisp and joyful throughout the first CD as he revels in the opportunity to perform in the group that inspired him to perform jazz when he listened to the Jazz Messengers in Moscow. From his bop licks on Bobby Watson’s “E.T.A.” to his take-charge muted trumpet solo on “My One and Only Love,” Ponomarev reminds listeners not only of his talent too frequently unheard by the current generation, but also of Blakey’s uncanny abilitiy to choose excellent musicians in their youth—in the case of trumpeters, from Lee Morgan to Wynton Marsalis. As for Schnitter, he tears up “Evaline” with fusillades of notes followed by the calmness of long tones after the genteel first chorus and Ponomarev’s muted chorus of understatement. Furious saxophonist though Bobby Watson was even in 1978, Schnitter matches Watson’s soulful intensity and melodic abilities on “Time Will Tell.” On the other hand, Donald Harrison’s solo on “Little Man,” full of altissimo phrasing and with repeated phrases, documents how his improvisational skills have developed since this recording at the age of 23.

As commanding as Blakey the leader is Blakey the drummer. The Sesjun Radio Shows includes opportunities to hear Blakey set the tone for several tracks, not only with his expected rousing rolloff on “Blues March,” but also with his exciting extended introduction for Wayne Shorter’s “Free for All” at the end of the first CD or with his more complex solo kicking off Bobby Watson’s “E.T.A.”

More generally, the discoveries within the release of The Sesjun Radio Shows reveal that Art Blakey’s Jazz Messengers was as exhilarating and enthusiastic when they performed for European radio audiences as they were in live concerts or in the recording studio.