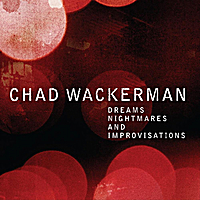 As a young man, drummer Chad Wackerman was hired by Frank Zappa, which is no minor achievement. With his notoriously difficult charts, Zappa commanded the best from his musicians while running a tight ship along the way. Since then, Wackerman has become an in-demand session artist within progressive-rock, jazz-fusion, and jazz idioms amid his longtime working affiliation with guitar hero Allan Holdsworth. Here, the drummer adds a significant entry into his discography, hearkening back to a few superb 1990’s releases for the now defunct Germany-based, CMP record label.

Besides possessing monstrous chops, Wackerman is a regimented drummer who knows when to back down, and provide a colorific textural component with his shrewd use of small cymbals and small percussion instruments. On this album, revered session artists and periodic Holdsworth band-mates, keyboardist Jim Cox and bassist Jimmy Johnson augment various pieces, comprised of atmospherics, up-tempo grooves, thrusting jams, and exploratory sojourns.

Wackerman’s polyrhythmic fills and dynamics keep this train a rolling, so to speak. He peppers, pushes and lashes out in support of Holdsworth’s fabled legato licks and chords-based effects, often implemented by his use of the Synthaxe and Starr Z-Board. However, a succinct and enduring melody remains a constant on the opener “Glass Lullaby.” Other pieces are driven by Johnson’s thumping bass patterns, and the band’s offbeat metrics, including intermittent treks into a dark void. The musicians tear it up in spots via the improvisational element. And Cox’s perky electronic keys on “Brain Funk,” ride above Johnson’s arcing bass patterns to culminate a medium-tempo vamp designed with a full-steam-ahead approach.

Wackerman provides a mini-clinic, patterned on a loosely based format and divergent track mix that equates to a high-degree of entertainment sans any reckless activities or overcooked technical forays. Otherwise, the artists’ synchronicity, balanced line of attack, and integration of harmonious song-forms abet the sum of the briskly moving parts. –