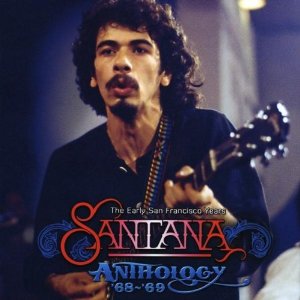 Carlos Santana is a name synonymous with rock, Latin and blues music. He is a hero to millions of Latinos and inspiring guitar players worldwide. Santana’s influence ranges far and wide and the music he has produced since the 60s continues to gain a seemingly endless fan base.

Santana had some very important formative years and recording sessions that came before that amazing first blockbuster release. The Early San Francisco Years-Anthology ’68-’69 has been released in different formats and configurations over the years so Cleopatra Records decided to put all of the music together into one complete box set format. There is something unique about this set that you probably will not find anywhere else, it comes with a colorful cloth picture that you see on the cover of this set. The cloth is yellow and orange with tie die markings and the Santana logo. It is similar to a neckerchief and can be used with other articles of clothing or it’s suitable for framing. The package also includes a poster.

These differences separate it from other releases and I give the label credit for their creativity in repackaging the releases. The set is broken down into three CDs, Latin Grooves, Santana Blues and Improvisational Jams.

Latin Grooves sheds some light on the direction Santana and his band was going and the 9 tracks are a decent assessment of that early sound. Santana Blues shows were most of his influences came from however the sound quality suffers on this disc making it a hard listen all the through. And the best disc is the third; Improvisational Jams. It is clearly the best in every aspect. From a musical standpoint it makes a statement of how diverse and original Santana could sound. His brand of rock, jazz, blues, and world music made for a fusion nobody was producing at the time. This music was the forerunner to much of the world fusion music you hear today. It also served as the foundation to many divergent sub genres.

Santana set the bar high for guitar virtuosos and innovation and he is still doing it today. This set is not only a worthy collectable its Santana 101 before he became a huge star. It is worth adding to your collection and paying attention to.

For Questions Or Comments About This Review Send An Email To info@muzikreviews.com