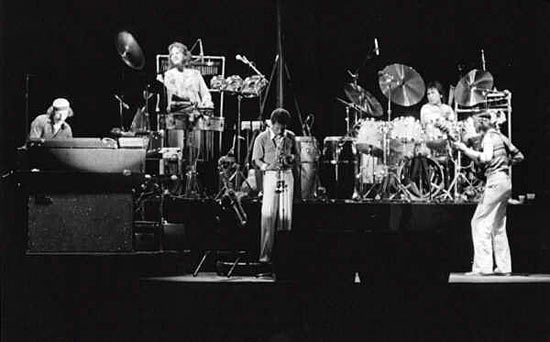 Director John Ford once stated through his character Maxwell Scott in “The Man Who Shot Liberty Valance” that, “When the legend becomes fact, print the legend”, and why not, as it ignites inspiration to those whom embrace its mystique and drama. Legends have a way rebirthing old chapters to new. Thus the dark side of jazz has many rebirths over the actual lives of many musicians; such is the case in the 35 years of one John Francis Anthony Pastorius III…known respectively as Jaco.

Legend or fact, one thing is certain, Weather Report with Jaco Pastorious was a force in jazz… allowing them to fit snuggly within the classics of the genre.

One of the most absorbing musicians to ever engage a branch of music, both off-stage and on, he was energy with a vast fan interest and respect. Whether his life was a impractical tragedy or a circumstantial neurosis, between sound and fear, shades of revulsion, and excess wrapped up in one of the most profoundly talented artists, Jaco Pastorius was above all, the most intense and iconic entertainment cast members ever scripted. Jaco had it all; he had a normal life, with a family until situations unknown created imbalance. His life then became a free fall; mythical with erroneous fabrications of his vices and demise but one fact stands firm, his importance to the music industry concedes to his immortality, thus earned and dully noted. For once you spin Weather Reports majesty, the legacy filters into greatness and the sound within!

As previously stated, Jaco’s existence was one of overindulgences yet in 1976 he joined Weather Report and enhanced their style, combined with his innovation and eclectic on-stage vibrancy. By rewriting the textbook on bass ideology and in fact, upgraded the many theories behind it.

As for the band, Weather Report leaped from the standard classical jazz mold of jazz, into a premeditated innovative machine of eclectic new-age jazz.

There was more to the substance of Weather Report, as Legacy Recordings showcases through their recording efforts. They explore and extract those sounds through this new 2011 collection, Weather Report/The Jaco Years “The Complete Columbia Albums Collection”, which offers the jazz populace, the purist of experiences in jazz, combining 6 CD’s, capturing that lightning in a bottle effect, that Weather Report had with audiences. Thus recreating the creativity that Weather Report’s innovation unleashed to the music arena.

Night Passage, their third live album released in 1980, had that enhanced element of audience appeal to it. Each and every sound showcased to stimulate the senses of the jazz circuit psyche. The hum of Shorter’s sax in “Forlorn” just sets me back to a fog filled back alley and the loss of a heartbeat, with his characteristic feel. In contrast, the flip side of attitudes converts into several insane bass tirades from Jaco throughout the selections. This collection takes the listener on numerous roller coaster rides, along with some never before heard bonus spins…

For those who worked by them (Weather Report) in their moments of inventiveness with Joe Zawinul and Wayne Shorter, as the nucleus, along with iconic figures Herbie Hancock and Jaco, Weather Report morphed into a lesson in captivating riffs and compound arraignments…Producer Jason Miles who worked on a project branded “Celebrating the Music of Weather Report” had this to say. “Weather Report was a true virtuosic band that innovated at a time when music was much more open to innovation. They were master composers and improvisers and also knew the value of great melodies.” Jason further explains their procedural results, “Mixing that with great grooves and a new electric sound, Joe Zawinul and Wayne Shorter created a group that hasn’t been equaled. Add Jaco Pastorious to the mix (1976) and for a time you had one of the greatest bands in the world. I work hard every day to bring our Group Global Noize to that level-Music without borders or boundaries.”

In actuality what Legacy Recordings and Sony has undertaken is not all that surprising but so galvanizing, for they have, through the allocation of these collections, extended a much deserved sense of respect to these masters heritages. In the same breath, expanded music’s iconic talents of greatness to further generations. This needed to be done with classic attention and forethought. I extol the talents not only of the performers of these great sounds but those who open wide, the imagination and sound they characterize.