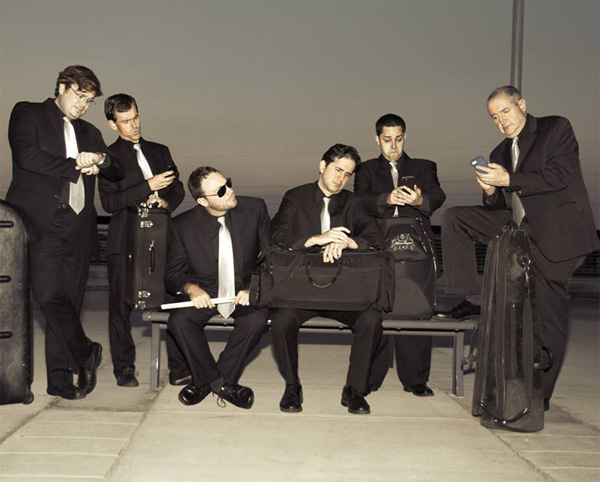 MICHAEL LEVINE (director, trombone) is originally from St. Louis Park, Minnesota. He first attended the University of Minnesota and then The Juilliard School, where he received his Bachelor of Music Degree. For three years he held the position of Assistant Principal Trombone in the Jerusalem Symphony Orchestra. Michael founded the Dallas Brass in 1983, and he serves as the ensemble’s trombonist, Master of Ceremonies and Artistic Director. As an arranger, he has made significant contributions to the Dallas Brass library. Michael has invented a device called the WindMaster, to help wind players develop their breathing technique. More recently, he has created the Harmony Bridge Project which is designed to connect band and other music students with seniors in nursing homes around the country. Michael’s favorite non-musical activity is snow skiing. He has duel residency in Dallas, TX and Minneapolis, MN.

Luis Miguel Araya (Trumpet) born in Alajuela, Costa Rica, has played a wide range of musical styles, ranging from classical to popular and Latin music. He has studied music extensively both in Costa Rica and in the United States, holding a Bachelor of Music degree from the National Institute of Music (Costa Rica), a Master of Music degree from Loyola University in New Orleans and a Doctorate in Music from Arizona State University. Luis has been a member of the Costa Rica National Symphony Orchestra since 1997. He is also on the faculty of the University of Costa Rica. Other orchestral experiences include the Venezuela Symphony Orchestra, the Miami Symphony Orchestra, and the Louisiana Philharmonic Orchestra. Other festivals attended by Araya are the Rafael Mendez Brass Institute (Denver, CO), and a Solo recital at the International Trumpet Guild Conference 2005 in Bangkok, Thailand.

D.J. Barraclough (Trumpet) began his musical studies on the trombone and continued playing it through high school. He didn’t actually begin the trumpet until his 3rd year in college. Originally from southern Utah, D.J. attended Dixie State College in St. George. He has performed with such organizations as the Utah Symphony, the Lex De Azevedo Orchestra, and the Lawrence Welk Orchestra. When not performing, D.J. enjoys working as a brass clinician, and through the use of the Smart Music Studio software by Coda Music Technologies, he helps young students learn to make practice more effective and fun. D.J. is also an accomplished instrument repair technician. His other interests include hiking, camping, and various forms of meditation. D.J. presently lives in southern Utah with his wife, Kristine, and their six children.

Juan Berrios (horn, tenor horn, flugelhorn) is originally from Bayamón, Puerto Rico. He has a degree in horn performance from the University of Central Florida, where he was the recipient of several awards including the Presser Foundation Scholarship and the Performance Excellence Award. For three years, Juan was a member of the award-winning Brass Band of Central Florida, one of the top-ranked brass bands in the United States. Serving as the band’s solo tenor horn player, he was a featured soloist on numerous occasions and can be heard on the band’s album “10th Anniversary.” Juan has spent summers at some of the most prestigious music festivals in the country, including the Music Academy of the West and the Aspen Music Festival and School.  Active as an educator and performer in the Central Florida area, Juan works with many middle and high schools serving as a private instructor and guest clinician, and performs with professional organizations such as the Sarasota Orchestra, Orlando Philharmonic, Brevard Symphony, and Palm Beach Symphony, among others.

Juan lives in Kissimmee, FL and enjoys spending time with his fiancée, cooking and bowling when not touring with the Dallas Brass.

Paul Carlson (Tuba) from Macomb, IL, has an extensive educational resume. He has degrees from the University of Illinois (B.M.), University of New Mexico (M.M.), and is presently working on his Doctorate in Tuba Performance at Indiana University in Bloomington, IN. As an music educator, Paul has taught on the middle school, high school and college levels. He was a Graduate Assistant at the University of New Mexico and has served on the faculty of the Blue Lake Arts Camp in northern Michigan. Performance experience includes the New Mexico Brass Quintet, Santé Fe Symphony Brass Quintet, the national touring group —The King’s Brass, the Walt Disney Collegiate All-Star Band (Orlando), and symphony orchestras including New Mexico, Albuquerque, and Louisville. Paul is also an accomplished jazz bass player — both upright and electric — and does various jazz gigs in and around Indianapolis.

CHRIS MCWILLIAMS (drums/percussion) is originally from Philadelphia, PA.  He graduated with a Bachelor of Music Education Degree from the University of Central Florida and is completing his Doctoral Degree in Percussion Performance as a Graduate Teaching Fellow at the University of North Texas, where he also received his Master’s Degree in 2011. He has recently performed with the UNT Percussion Ensemble and 2:00 Steel Band at the 2009 and 2012 Percussive Arts Society International Conventions, and on 2011 and 2013 European tours, in addition to serving as principle percussionist with the UNT Wind Symphony for three years. Chris has also performed for two years as a student musician in Walt Disney World, and has won the UCF Performance Excellence Competition, as well as performed with Dame Evelyn Glennie as a member of the 2007 International Youth Wind Orchestra in Killarney, Ireland, and as a member of the Magic of Orlando Drum and Bugle Corps in 2005. In addition to his teaching duties at UNT, Chris is Percussion Co-Caption Head for The Troopers Drum and Bugle Corps, and has worked with multiple high schools in both the Orlando and Dallas/Fort Worth areas. Chris currently resides in the Dallas, TX area.