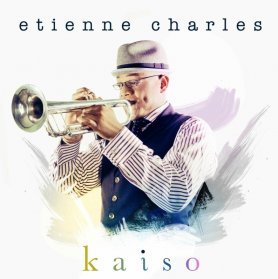 On Kaiso, his third recording as a leader, Trinbagonian trumpet maestro, Etienne Charles, cooks up an ambrosial bouillabaisse of New World music genres, with the jazz and calypso genres standing out as piquant flavours.

In the Efik-Ibibio language and culture of the Nigerian delta region, the term ‘kaiso’ comes from the exhortation “kaa isu” which means “go on” or “continue”. It is still used today by audiences desiring a calypsonian or musician “to proceed” or to “play on” and in reference to the art in its purest form.

Perhaps more than any other musician of his generation, or anyone of Eastern Caribbean origin, Etienne brings a careful study of myriad rhythms from the French, Spanish, English and Dutch speaking Caribbean to the table. Crucially, this young jazz professional fully understands the New Orleans trumpet tradition (which is readily discernible in his trademark instrumental swagger) and what the famed Crescent City pianist, Jelly Roll Morton so succinctly captured in the now immortal phrase, ‘The Spanish Tinge’.

Like Charles’s Culture Shock (2006) and Folklore (2009), this latest opus addresses the fundamentals embodying calypso and jazz. The first selection, an original composition, simply titled Kaiso, is an energetic fanfare chock-full of rhythm and horn-heavy accents. It harks back to a golden age of calypso when the brass section, and jazz-informed prowess on such instruments, held sway. It also adverts to the sophisticated arranging acumen of people such as Lionel Belasco, who so typified the synthesis of Afro-Latin meters and patterns. The opening tune also conveys the martial musicality of the stick fight and tambu-bambu rhythms. The instrumental voices on the piece, particularly that of alto saxophonist Brian Hogans, and Charles as his trumpet-wielding foil, closely mirror the sound of the chantuelle, the precursor to the calypsonian who came to prominence during the 1920s and 30s.

J’ouvert Barrio, a traditional carnival chant, was recorded in 1935 by the remarkable Roaring Lion (Rafael de Leon/1908-1999), who is also credited as being among the first calypsonians to read and write music notation. As its name implies, the piece clearly harks back to French origins (J’ouvert which is derived from jour ouvert, which translates as ‘daybreak’), and Etienne and his sextet paint a portrait of a carnival debutante beginning his or her journey with all of the attendant sights – and frights – of such a cultural moment. This is a highly cinematic jazz arrangement conveying a sense of twilight dread and libation-induced drowsiness, but still holding the promise of terpsichorean abandon, as revellers and carnival mas bands ‘chip’ their way through the streets until the proverbial ‘last lap’.

Russian Satellite, is one among many of now-famous Mighty Sparrow’s (Slinger Francisco, b.1935) witty social commentary calypsos. Renowned for his sonorous baritone, clever word play and double-entendre, the Caribbean Bard’s popular 1958 calypso concerned the plight of Laika, the benighted first dog propelled into orbit on the Soviet Sputnik launch of 1957, allegedly dying shortly after lift-off. Tragedy aside, everybody on Charles’s inspired update of the tune swings enthusiastically. This is arguably the most rollicking number on the CD, and the group’s propulsive bursts of improvisational energy carry it into stratospheric regions, rivalling any Soyuz or NASA mission.

Filled with dramatic shifts and displacements, the traditional chant, Congo Bara, is given a nuanced reading, in which tightly coiled passages give way to loose, relaxed segments. Etienne’s soft but persuasive trumpet tone, recalls Miles Davis and his 1964-68 Great Quintet. Against the backdrop of Obed Calvaire’s drum kit flourishes and Guadeloupean padjanbel percussive patterns, tenor saxophonist Jacques Schwarz-Bart’s sonorous solo is one of the composition’s most engrossing aspects.

Enlisting the accompaniment of Monty Alexander as a special guest is a particularly deft personnel decision on Etienne’s part. The Jamaican piano stalwart always enriches the proceedings with a wealth of bebop, reggae, ska, calypso, second-line and other stylings. Ten to One is Murder, the classic that won Sparrow the 1960 calypso monarch title, is a tune recalling a night in Port of Spain where he gets into a brawl with ten men at Miramar. Etienne recreates the fight scene with his band teasingly trading phrases in a call-and-response lance and parry at the opening then laying all out at breakneck speed. Both guest and host are in transcendent form.

Lord Kitchener (Aldwyn Roberts/1922-2000) was one of the greatest calypsonians of all time. Also known as the Grandmaster, he enjoyed success as a composer, singer, and acoustic bass player in Trinidad, and in the UK, where he resided for several years. ‘Kitch’ wrote many sophisticated calypsos and arrangements that were doubtless influenced by his great love for jazz. One such composition is Bebop of Calypso, a tribute to Charlie Parker, Dizzy Gillespie and Miles Davis alternating between gallows-like swing and a kaiso groove that is as infectious as measles. The tune, written during the 1950s, found great resonance with jazz and calypso fans in London and further afield. Lord Superior, a contemporary of Kitch and a legend in his own right, made his mark in Trinidad and New York during the calypso craze of the 50’s and 60’s. On this version, Superior joyfully renders his cohort’s tune while Etienne’s muted trumpet runs through the tricky chord changes like a youthful Gillespie. Monty Alexander masterfully crafts his lines while interacting with the ever-swinging Calvaire and Williams, weaving mento-influenced riffs into his solo.

Rose, a classic from the Mighty Sparrow songbook, is given a reinvigorated interpretation with Etienne’s sophisticated orchestral arrangement. The flutes assist greatly in punctuating the catchy melody, and again, Mr. Charles’s trumpet rides on romantic wings, over plaintive strings and a gently percolating groove, to aptly call forth a sense of tabanca (lost love).

My Landlady, is a powerful musical document of the West Indian immigration experience in England during the 1950s. This song humorously describes Lord Kitchener’s experience as a Trinidadian tenant hounded by his English landlady for the weekly rent. Etienne’s tasteful phrasing in the traditional calypso style helps to recreate the bouncy, lively voice of the original. Monty Alexander again takes the piano spotlight alongside vocalist Lord Superior.
The intimate, heartfelt duo effort of Monty and Etienne on Lord Kitchener’s 1970 Roadmarch-winning tune, Margie – now immortalised as an important calypso jazz standard – is also a master class in the way a ballad should be played.

Etienne Charles and his aggregation have brought a modern jazz sensibility to the calypso tradition, and essayed a highly creative take on songs from yesteryear. Mr. Charles bookends this invigorated musical investigation with a Lord Kitchener 1978 Soca (soul calypso) classic, Sugar Bum Bum, a worldwide Ed Watson penned hit that reverberated across discos and house parties from Mayaro to Manhattan in its heyday. The tune celebrates the beauty of the Caribbean woman. Etienne cleverly uses the horn section to swoon over the pulsating groove. The wicked bass line of the original is mirrored in Ben Williams’s dancing acoustic upright bass treatment as well as in Sullivan Fortner Jr.’s playful accompaniment and masterfully crafted solo. Etienne’s trumpet soars with a tasteful combination of lyricism, syncopation and power over the final jam section.

As enjoyable as a snack of Bake ‘n’ Shark while strolling on Maracas Bay, Etienne Charles and his jazz outfit carry listeners back to the halcyon days of the calypso art form. Constantly buffeted by changes in the music industry and by a multiplicity of fusions such as chutney and rapso, calypso music has refused to stand still.
With this CD, a very special son of Trinidadian soil offers the world a cool chalice of sweet calypso, brewed with jazz and a host of other fine rhythms. Everybody will be sure to raise the shout: “Kaiso!”