Sheryl Bailey, "For All Those Living" 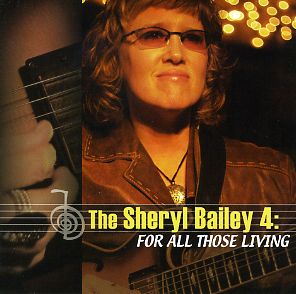 Sheryl Bailey has a big heart, that much is known. With the wisdom gained from loss and concern for survivors, Bailey has found an outlet for her empathy through music. Though Bailey has developed a reputation for blazing guitar work, she tones down the strength of her attack on For All Those Living, her tribute to the people who strive to reconcile loss or to promote healing. To make her statement, Bailey presents her recently formed quartet consisting of pianist Jim Ridl, Gary Wang on bass and drummer Shingo Okudaira. Bailey is donating a percentage of the proceeds from the album to the Ronald McDonald House. www.rmdh.org

The inspirations for Bailey’s style for the project are the Wes Montgomery/Wynton Kelly recordings, such as Willow Weep for Me and Smokin’ at the Half Note. Consistent with her theme of healing, the title track shifts between minor and major keys as Bailey’s thoughts of loss evolve into celebrations of the life we are afforded. Ridl’s piano solo in particular rouses the listener with bounding irrepressibility. In fact, Philadelphian Ridl is restrained as he accompanies Bailey, compared to the ferocity of his playing on his own albums like Five Minutes to Madness and Joy.

Despite the sincerity of Bailey’s caring for the suffering of fellow human beings, she can’t restrain her innate joyousness arising from the act of making music. “Mesa’s Bag” contains all the elements of uplifting composition and performance, including call and response, Montgomery-like octaved choruses and a repetition of a phrase with changes at the end. Moreover, the clean lines of improvisation and the infectious swing, drawing listeners into its immediate groove, do recall the work of guitarists of the sixties, like Montgomery, Grant Green, George Benson with Jack McDuff, and Pat Martino.

“29-11” interestingly captures the listener’s imagination with its singable melody played over 5/4 as the meter is integrated to serve the extroverted purposes of the composition, rather than being a novelty with a contrived melody, as occasionally happens with others’ 5/4 pieces. Once again, Bailey and Ridl are 110 percent in sync as their spirits mesh for complementary versions of the theme, Bailey being lyrical and Ridl being expansive in employing the entirety of the keyboard.
And the rest of For All Those Living remains consistent with Bailey’s sunny disposition of providing hope to those who are coping or else nodding appreciation to the jazz artists of the mid twentieth century. On the one hand, there’s the evocative “A Muse Sings,” lush and dark in minor-keyed remembrance of Jimmy Wyble, a major guitar influence for Bailey. Then, there’s”Moblin’,” a tribute to the soulfulness of Hank Mobley. “Moblin’” doesn’t borrow from the sound of the saxophonist so much as express typical Baileyesque joy at the thought of him. Her first chorus leads into successive improvisations, never repetitive but instead energizing, as her quartet appears to gain artistic momentum as the piece progresses.

For All Those Living presents Sheryl Bailey in a straight-ahead, compassionate mode as she combines affection for the legendary guitar quartet sound with directing music toward its universally acknowledged power of healing.