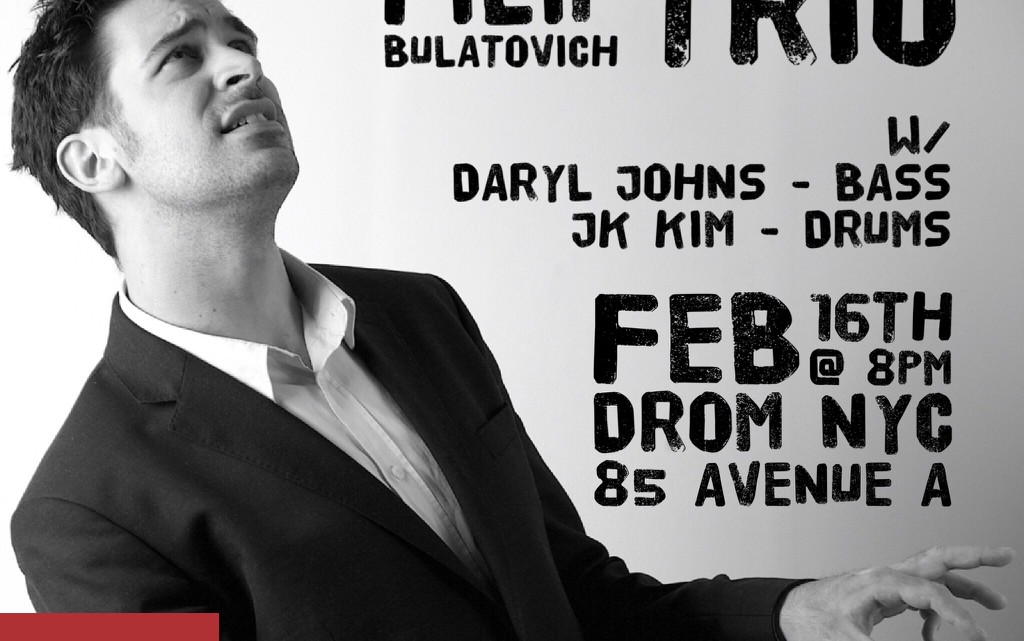 Filip Bulatovich, masterful jazz pianist, showcases engaging and meditative compositions in his debut at DROM, New York City premier music venue for showcasing music from around the world, on February 16, 2018 at 8pm, presented by LeitmotivArts.

Filip Bulatovic is a New York-based jazz pianist and composer. He was performing at jazz clubs in his native Belgrade since age 16. Then he went on to study jazz piano at the jazz university of Cologne, Germany with two great names of jazz piano – John Taylor and Hubert Nuss.

Besides jazz, Filip was also involved in many commercial and pop music projects and has recorded soundtracks for one of the most celebrated film directors of our times, Emir Kusturica.

In 2009 he recorded his first album, Filip Bulatovich Trio (Live at Bechstein Centrum). A year later he took the 3rd prize at Freiburg Piano Competition as the youngest among the competitors. In 2012, Filip put together Qzama Quartet, gathering some of the best jazz musicians in Serbia. Qzama became an instant hit in the Belgrade jazz scene, setting the course of its first international tour. In 2015 he recorded his second album, “Portrait In Black And White” the first one with Qzama Quartet, released in 2016.

Filip came to America to feel the pulse of the hotter music scene and possibly prepare ground for some of the other projects on his mind. His rather eclectic opus consists of more than 50 pieces of music, containing pop vocal numbers, jazz and classic pieces for combos, as well as the compositions and arrangements for big bands.

Filip thrills the crowd with original compositions which are influenced by a mixture of classical and modern jazz and classical romanticism music, giving his trio a warm and interesting sound, making all musicians equally interplay and breathe as “one”.

For more information about the event visit

Next post Cal Harris Jr. Eyes The Top Of The Radio Charts With New Single "Soulful"