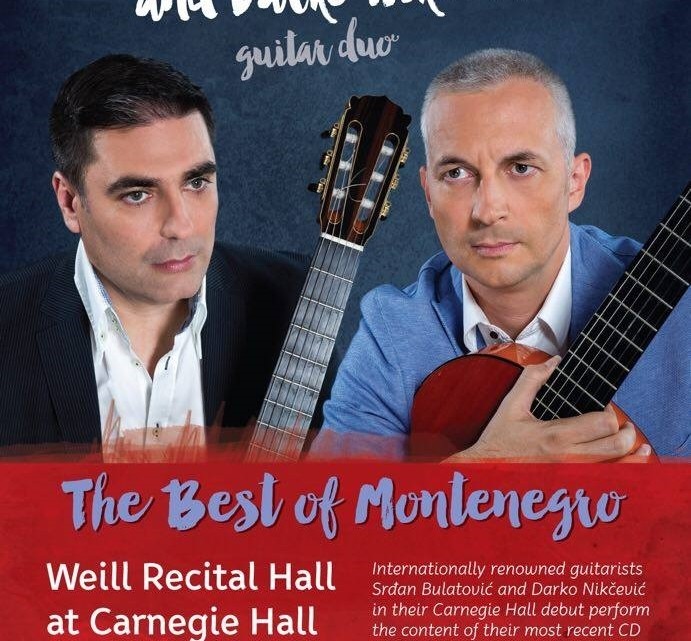 Guitar duo Bulatović-Nikčević from Montenegro will have its Carnegie Hall debut on October 18th, presented by LeitmotivArts

Renowned guitarists from Montenegro, Srjdan Bulatović and Darko Nikčević will have their New York debut at world famous Carnegie Hall on October 18, 2016, in a concert organized by LeitmotivArts. They will perform original compositions from their new album “The Best of Montenegro”, compositions inspired by traditional Montenegrin music and recorded by Radio Montenegro.

The duo Bulatović -Nikčević has performed for both national and international audiences for more than 25 years, presenting their original pieces invoking the “languages” of classical and flamenco guitar. While varied in terms of character, style, rhythm, and tempo, their original compositions also, share a common thread of Montenegrin traditional music, movie soundtracks, world music, and popular contemporary movements.

Having performed for audiences throughout Europe and Montenegro where they enjoy immense popularity, they are now eager to introduce Montenegrin music in the United States.

“Our music represents the unique blend of beauty of the Mediterranean, “broken” Balkan rhythms and the mysticism of the Orient. We will introduce ourselves to New York audience in the manner we know best which is by presenting Montenegro and is musical tradition”– says Darko Nikčević.

Danijela Milić, founder of LeitmotivArts’s who has produced numerous cultural and music events promoting artists from the Balkans in the United States adds:

“At last the right opportunity to showcase musicians from Montenegro has presented itself in the LeitmotivArts series of concerts I produce at Carnegie Hall. Although I’ve been living abroad for a quarter century, in my heart I continue to carry the sounds and scents of my homeland which are so richly reflected in the music of these two talented duo.”

The concert at Carnegie Hall on October 18 is organized by LeitmotivArts with the support of the Consulate General of Montenegro in New York and the Ministry of Culture of Montenegro.