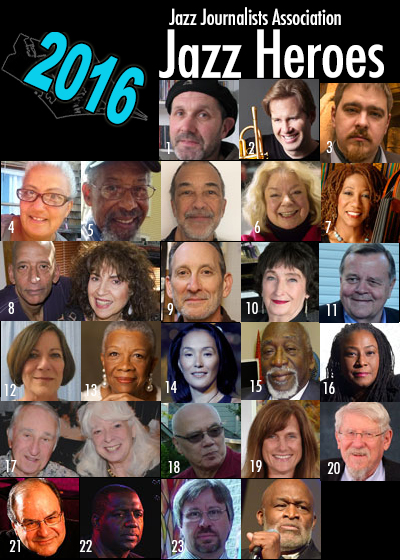 The Jazz Journalists Association has announced winners of its 20th annual Jazz Awards in 32 categories of musical excellence and has opened ticket sales for its 2016 Jazz Awards Media Party at the Blue Note in New York City, 3 pm to 5:30 on Wednesday, June 15.

Among Awards winners – all of whom are listed here — are Henry Threadgill (also this year’s winner of the Pulitzer Prize for Music and a Doris Duke Performing Artist award), celebrated with the JJA’s Lifetime Achievement in Jazz Award, and composer-arranger-orchestra leader Maria Schneider, named Musician of the Year and given four other Awards, including Best Album of 2015 for The Thompson Fields. The JJA hails Los Angeles-based tenor saxophonist Kamasi Washington, who made his recording debut in 2015, as Up and Coming Musician of the Year.
The JJA is the non-profit professional organization of writers, photographers, videographers and broadcasters covering jazz. Winners of JJA Jazz Awards are selected by the organization’s members in a two-stage voting process, and will receive their engraved statuettes at their performances in the U.S. this coming summer.

These Jazz Awards winners represent an impressive range of music. Threadgill, 71, is an exploratory composer, incisive reeds and winds player and leader of memorable ensembles who has been in the vanguard of creative innovation for more than 50 years. Schneider is known for her compositions awash in subtly detailed orchestrations that inspire deeply committed solos and ensemble harmonization from her 19-member orchestra. Washington’s Award attests to his appeal as a live performer on tour following the May 2015 release of his three-volume album The Epic, which sets Coltrane-inspired modal blowing amid voices and strings; he also contributed significantly to Kendrick Lamar’s To Pimp a Butterfly.

Other winners include Male Vocalist of the Year Gregory Porter and Female Vocalist Cecile McClorin Salvant. Historical Record of the Year is The Complete Concerts By The Sea (Columbia Legacy), a restoration of the 1956 album by pianist Erroll Garner.

Still to be come: Winners of the 2016 Jazz Awards for Media (Lifetime Achievement in Jazz Journalism, Best Book of the Year, Best Periodical, Blog of the Year, Photo of the Year, and awards for writing, broadcasting, photography and original album art) will be announced at the JJA’s Jazz Award Media Party at the Blue Note, 131 3rd St. NYC, on Wednesday, June 15 from 3 to 5:30 pm.

Tickets for the Media Party are available to the general public, as well as JJA members and Jazz Awards nominees. Jazz Awards winners are invited as guests, but must make advance reservations. The Jazz Awards party will feature performances by the Herlin Riley Quintet, singer René Marie with her trio, and solo pianist John Beasley. Angelika Beener, the award-winning Improbable Aficionado blogging at Alternate Takes, and Simon Rentner, producer at WBGO, will host the Awards, where Brother Thelonious Belgian Style Abbey Ale will be served.