John Swenson's 'Musicians Battle for the Survival of New Orleans' 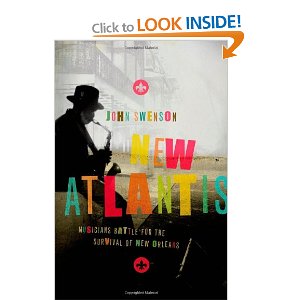 John Swenson, my music writing collaborator for many years at UPI, is out with a gem. “New Atlantis: Musicians Battle for the Survival of New Orleans” (Oxford University Press) captures the determination of New Orleans’ stylistically varied music makers to survive after Hurricane Katrina and to help keep the city’s soul alive.

John has been writing almost exclusively about New Orleans and its musicians since the late 1990s, principally for Offbeat magazine, and has come to understand his adopted city well. (He splits his time between New York and the Crescent City.) As you dig into this book, you’ll fast appreciate the depth of his keen understanding of the city’s contemporary music scene (jazz, R&B, brass band, rock, and hip hop), as well as the music’s deep roots.

The city’s problems are far from solved post-Katrina (or as John repeatedly calls it, “the federal flood”) in August 2005. But through John’s insightful perspective and to-the-point writing, we get an appreciation of just how important music and its makers are to its continued rebirth.

There is more than just a cultural phenomenon at play here, in a city where music is so much more than mere entertainment. As John reflected in an interview with The Beachcomber: “New Orleans musicians treat music like a sacred trust, handed down from their ancestors. It’s different from the commercial pop world.”

It is so very different, and the United States, and indeed, the world, are so much richer because of it.

Next post Less Than Two Weeks Until Blues, Jazz & Soul Legends Arrive In The UK For The Very First BluesFest London