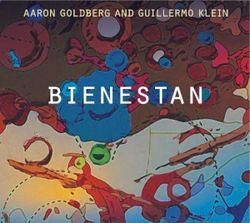 SET FOR RELEASE ON SUNNYSIDE RECORDS

“Jazz doesn’t have many great albums featuring two pianists, and the rare examples tend to be mano-a-mano affairs, one virtuoso facing another on equal terms. So ‘Bienestan,’ due out on Sunnyside on Tuesday, is exceptional in more than one sense….The music is complex but never cold, and when the keyboardists do square off alone, on a pair of Mr. Klein’s inventions, they sound entwined, like extensions of each other.”
– Nate Chinen, New York Times

“It’s all Guillermo’s music and arrangements, and that was the idea,” says Goldberg. “We were conceiving of it almost in a Gil Evans-Miles kind of way, where I was the featured soloist and he was thinking of me when he wrote the stuff. I didn’t contribute anything compositionally–I wanted to do something that would put me in Guillermo’s universe, so to speak.”

From radical reinventions of the well-worn jazz standard “All the Things You Are,” Charlie Parker’s “Moose the Mooche” and the Brazilian staple “Manha de Carnaval” (from Black Orpheus) to Klein masterpieces like the evocative “Impresion de Bienestan,” the challenging Afro-Cuban flavored “Human Feel” (a kind of Astor Piazzolla-meets-Philip Glass bit of fiery minimalism) and delicate, chamber-like “Burrito,” Bienestan presents a stimulating program that is brimming with thoughtful lyricism and stirring improvisation while being distinguished by Klein’s signature cutting-edge harmonic sophistication and rhythmic innovation. The album title, Goldberg explains is actually a misnomer that came about through happenstance.

“The way the title came about is sort of a fortuitous joke. There’s one tune on the record called ‘Impresion de Bienestar,’ which means ‘impression of well being.’ And Matt Penman, who doesn’t really speak Spanish but knows just a tiny bit, read it as ‘Impresion de Bienestan.’ The chart for the tune said ‘Bienestar,’ but it looked like it could’ve maybe been an ‘n’ instead of an ‘r’. And we thought, ‘Bienestan! Like Uzbekistan or Kyrgyzstan!’ So we invented this mythical country Bienestan, imagining it as a diverse utopia full of different kinds of well- being. That’s the idea of it. Bienestan is a land of journeys that ultimately serve to elicit emotion. We thought it was an apt description of the variety of different territories, textures and moods that you would find on this album.”

Bienestan includes two intimate duets between Goldberg and Klein on “Implacable” and “Airport Fugue” as well as two gorgeous ballads in “Anita” and “Yellow Roses.” “Blues for Alice” is an intricate and frisky romp through shifting time signatures, and they also offer two renditions of “Manha de Carnval” – one done as a kind of droning requiem and the other rendered as a challenging vehicle in five. Many of the tunes on this rousing collection utilize an innovative rhythmic concept that is Klein’s own. As Goldberg explains, “It’s an example of what you might call metric modulation, but Guillermo calls them ‘filters.’ It’s a device that he’s used throughout the last decade with his own bands and it plays off the relationship between three and four which you find throughout African music, South American music and, of course, jazz, including in the relationship between a triplet and a swing eighth note. This layered three vs. four relationship lies at the heart of the intersection of African and European musics all over the world, and Guillermo has his own particular take on it. The challenge was to improvise over those filters that he applied to the music. And I think we pulled it off, considering that we were basically learning it in the studio as we recorded.”

Goldberg’s musical relationship with the Argentine pianist-composer-arranger goes back to the early ’90s. “I’ve known Guillermo since I was about 18. I went to the New York School for a year in 1991-92 and then came back to Boston to attend Harvard. I met Guillermo shortly after that. I used to hang out at Berklee a lot when I was going to Harvard. It’s where I went to find good musicians to play with and somehow I got hooked into the scene of Berklee students. At the time, Guillermo was studying composition at Berklee and he had a big band called the Big Van, which is actually a pun in Spanish because the ‘v’s are pronounced as ‘b’s…so it sounded like ‘Big Band’. And he needed a piano player. He wasn’t playing piano then, he was mostly just writing. He may have heard me on someone’s senior recital or on a recording and he called me out of the blue. I knew a few guys in the band and they told me how great the band was, so I was excited. And I did that for a couple years, including recording with the Big Van in 1995.”

Goldberg and Klein both later moved to New York around the same time, 1996, and when Klein started doing a residency with his Big Van at Smalls, Goldberg was playing piano in the band. “At a later point, Guillermo joined in on keyboards and began playing a second keyboard part,”Aaron recalls. “That was the first time we started playing together in a band. There wasn’t as much direct interaction between the two of us early on, because Guillermo was mainly using the keyboard for larger-scale textures.” Eventually, Klein transitioned into playing piano in his Big Van as well as his subsequent ensemble, the acclaimed eleven-piece Los Gauchos. By that time, Goldberg was in-demand on the New York scene, touring with Joshua Redman’s band among others as well as leading his own trio. “But we stayed in touch and I used to go hear him play whenever I could,” Goldberg recalls. “And of course, I had all his records and vice-versa. We were friends so he was in my consciousness, so to speak, even when we weren’t really playing together.”

Klein subsequently moved back to Buenos Aires in 2000 and later relocated to Barcelona. “Whenever I’d pass through Spain we’d hang out,” says Goldberg. “We talked about working together again. And the time was right for me. Home was about to be released and I didn’t immediately want to put out another trio record after that. So I floated the idea to him about doing something together and he was excited. Neither one of us was quite sure how it was going to work, but I explained my concept of it which was basically for him to provide a musical setting for me to do what I do…but in a universe that was partway between his universe and my universe.”

Initially, the two tossed around the idea of putting together a whole album of two-keyboard fugues. Only two of those signature pieces made it to the record (“Airport Fugue” and “Implacable”). As the project evolved, the rest of the musicians came onboard – saxophonists Zenón and Cheek having played on various Klein projects and Harland being a longstanding member of Goldberg’s trio. Bassist Penman was also a friend of Goldberg’s going back to their Berklee/Harvard days together, and Penman had shared the bandstand with Harland as members of the SF Jazz Collective. “I’m a big fan of both Miguel and Chris,” says Goldberg, “and I knew that Matt and Eric were a great combination and would understand Guillermo’s music pretty fast. And they did.”

Their collective cohesiveness, along with Klein’s penchant for orchestrational sophistication and Goldberg’s penchant for lyricism, is apparent from track to track. Together they strike a stirring accord on Bienestan, a stellar collaboration between two very potent forces on the jazz scene.