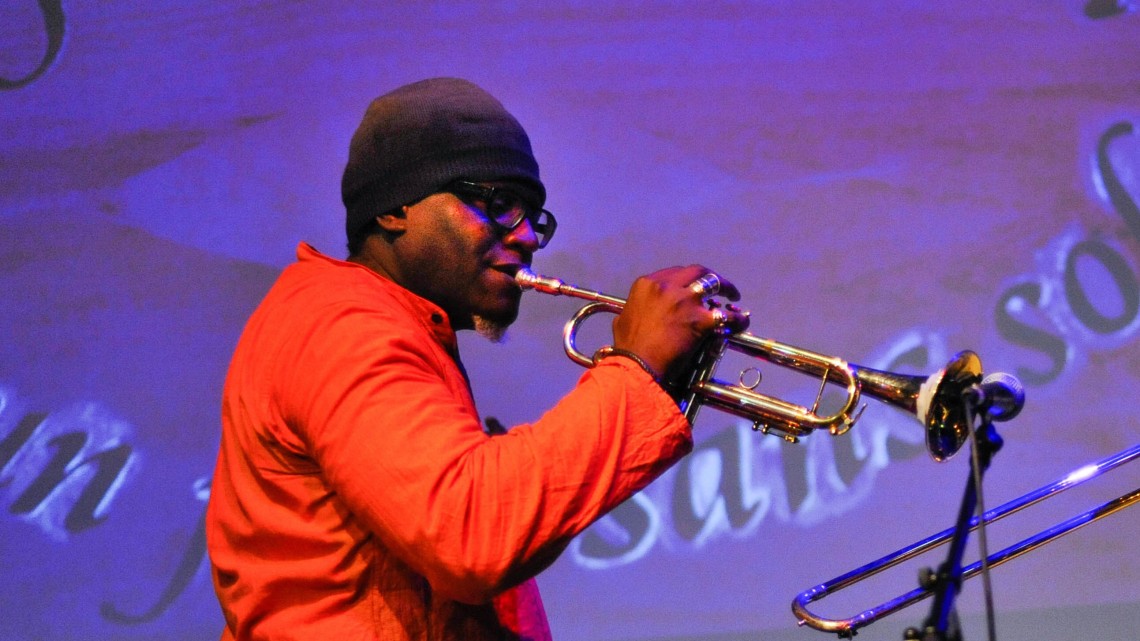 Kevin, known for his extensive touring and recording with Lamb, Adam F, Finley Quaye, Lemn Sesay and many others has hosted jam sessions for the last 20 years around the UK in which he acts as host, master of ceremonies and musical director. The evening begins with a core or house band doing a short set, after which guest musicians come on stage. During the Monster Jam sessions, experienced visual artist Cath Johnson’s striking artwork and photo-montage pieces are projected on to a large backdrop on the stage. This lends a colourful art-installation vibe to the stimulating entertainment package being offered.

born Davy (Photo at right by Marizu Okereke) studied Humanities at Manchester Metropolitan University and played in that city’s vibrant music scene, attending workshops run by Colin Stansfield at All Saints College. These workshops were instrumental in crystallizing Kevin’s ideas for open jazz and free improvised music, integrated into jam sessions in Manchester:

“I worked on my trumpet playing and on general musical skills, at the time, and attained musical director and leadership skills. I hosted jam sessions in Hulme, Manchester, in local pubs, soon moving to larger venues like PJ Bells, and Band On The Wall. From the late 80s to the mid 90s the jams were well-attended. It was called Kevin Davy’s Monster Jam by the time it was held at Band on the Wall, in Manchester’s Northern Quarter. Stylistically, I was into Miles Davis heavily, everything he did, and subsequently listened to all the major trumpeters and the music in general. I was particularly drawn to the music and style of Don Cherry, Lester Bowie, and Hannibal Lokumbe, and the music they were putting together, what was around them. I found that fresh and interesting.”

After discussions with director Oliver Carruthers, Kevin decided to revive the idea of a Monster Jam session at the Rich Mix in London’s East End, a part of London which is fast becoming a major cultural centre of gravity. Kevin has also been fortunate to work with photographer and artist Nadjib Le Fleurier. On the last Monster Jam, Le Fleurier featured an installation titled ‘Al Batin’. Members of the audience were invited to interact with the installation, during the music improvisation onstage.

Kevin’s philosophy is a simple one: it’s all about freedom and empathy. As he explains:

“After over two decades of running jams sessions, I believe that you can have freedom, with discipline and some structure. I can let it go free, but I make sure that we can get back to a theme groove or melody idea. I try to include those who would like to participate in the jam session but require a level of musical competence, especially on the backline/rhythm section, which I see as the spine of the whole thing. You need good players on those seats, and on the rest there is some freedom within some consideration and empathy for what is happening with other musicians. Some wonderful interplay can be spontaneously produced on some of the pieces. It’s a beautiful thing to see.”