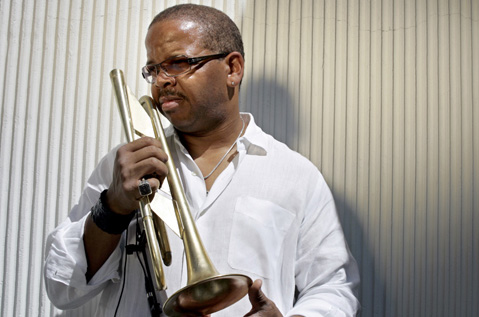 Berklee College of Music has named world-renowned trumpeter, composer, bandleader, and Blue Note recording artist Terence Blanchard as a visiting scholar in the Jazz Composition department beginning in the fall of 2015. Blanchard will also work in the Film Scoring and Brass departments, and for the Berklee Global Jazz Institute.

“Coming to Berklee feels like I’m coming home. Even though I never went to Berklee, I hang out there a great deal and learn a lot from my friends who went there,” said Blanchard. “Recently, I was guest teaching and was amazed at how much the school has grown and created new avenues for expression. I am really looking forward to joining the faculty and will do my best to add to an already great team of educators.”

“Terence is a triple threat: a composer of the highest order in film and jazz, a widely admired performer, and someone who has devoted himself to teaching and passing the tradition along to the next generation,” said Berklee President Roger Brown. “We are excited to have him be part of Berklee.”

In the spirit of his onetime membership in the jazz school of Art Blakey’s Jazz Messengers, Blanchard has mentored several musicians in his bands who have gone on to have significant recording careers of their own, including Berklee alumni Lionel Loueke and Kendrick Scott, Aaron Parks, and current band member Fabian Almazan.

“My approach to teaching will be what it’s always been,” Blanchard added. “Helping students find that individual musical personality inside them and giving them the tools to expand and develop their own ideas into bigger forms of musical exploration.”

New Orleans native Terence Blanchard is a four-time Grammy Award-winner. His acclaimed recordings include The Heart Speaks, Bounce, Flow, A Tale of God’s Will (A Requiem for Katrina), and Magnetic – which marked his return to Blue Note after eight years composing and performing works for film, as well as releasing a series of CDs for Concord.

His latest album, Breathless, featuring the E-Collective, is set for release May 26th and is already receiving widespread critical acclaim. Wall Street Journal writer Larry Blumenfeld proclaimed, “Blanchard’s arc of growth and change has, for decades, been consistent yet never predictable. ‘Breathless’ is Blanchard’s most accessible CD in years yet also one of his most complex – revisiting his past while also leaning forward, letting things get loud as he reaches for and finds tenderness, and embedding protest music into a party-ready atmosphere.”

Blanchard is a prolific film composer with more than 50 scores to his credit. He has written the score for every one of director Spike Lee’s films since 1991, including Jungle Fever, Malcolm X, Clockers, Inside Man, and Hurricane Katrina documentary When the Levees Broke. He also recently scored WWII drama Red Tails for producer George Lucas, and the Kevin Costner film Black Or White.