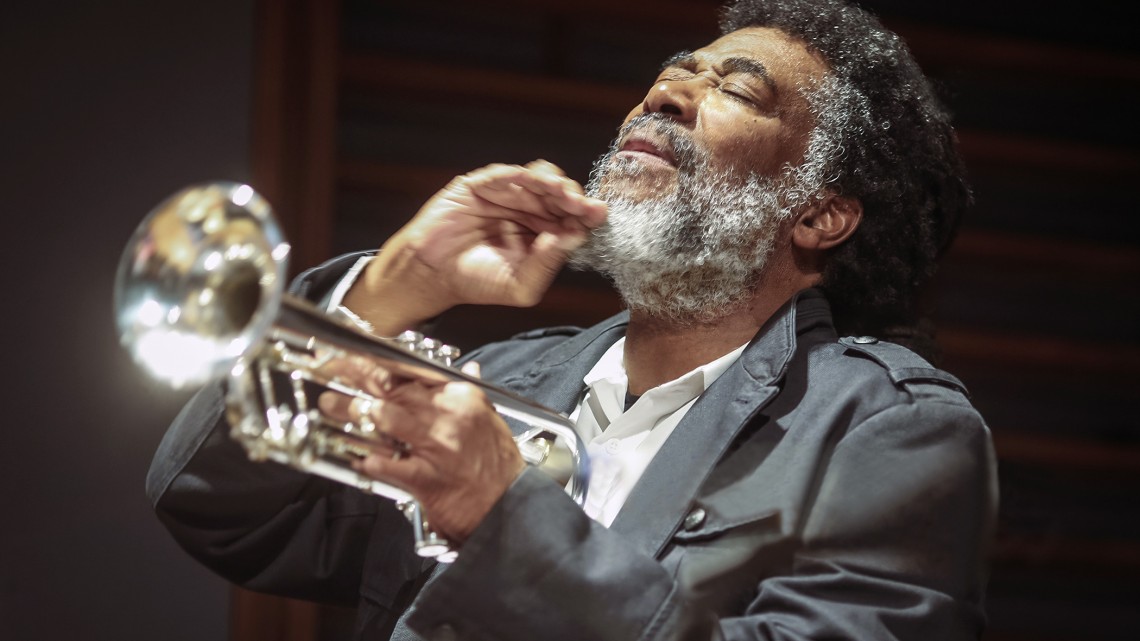 “Smith uses his magisterial instrumental voice, his inspirational leadership and his command of classical, jazz and blues forms to remind us of what has gone down and what’s still happening.”
—Bill Meyer, DownBeat’s 80 Coolest Things in Jazz Today

“A trumpeter and composer of penetrating insight.”– Nate Chinen, The New York Times

Visionary composer and trumpeter Wadada Leo Smith presents the first-ever CREATE Festival, a two-day celebration and exploration of his inventive and unclassifiable music that will feature classic works alongside world premiere performances. Taking place Saturday and Sunday, April 8 and 9, 2017 at Firehouse 12, 45 Crown Street, New Haven, Connecticut, the festival will include performances by five separate ensembles as well as seminars discussing Smith’s singular compositional innovations. Tickets are $30 for each of the seminars and each of the concerts; $55 for two events; $80 for three events and $100 for all four CREATE Festival events. For information, please go to http://firehouse12.com/ or call 203-785-0468.

“This idea has been in a dream state for many, many years,” Smith says. That long-cherished dream has been realized in part due to support from the Doris Duke Charitable Foundation, which awarded Smith the Doris Duke Artist Award in 2016. The festival offers a thrilling, rare opportunity to delve deeply into the full scope of Smith’s sui generis compositional voice and approach, which – in their category-defying range and breadth – can only be classified using Smith’s preferred term, “Creative Music.”

The eclectic weekend will include two unique trios, each featuring unusual, ingenious instrumentation; three of the composer’s most recent works for string quartet, the latest entries in an oeuvre now spanning more than five decades; a vocal oratorio; the world premiere performance, over two nights, of Smith’s latest epic composition, “America’s National Parks,” and Smith performing A Thelonious Reflection on solo trumpet. In addition, Saturday’s concert will kick off with a short set by Wadada’s 21-year-old grandson, guitarist Lamar Smith and his trio.

Both evenings’ concert programs will culminate with “America’s National Parks” by Smith’s newly-expanded Golden Quintet: Smith, pianist Anthony Davis, bassist John Lindberg, drummer Pheeroan akLaff, and cellist Ashley Walters. Cuneiform’s 2-CD recording of the suite last year was widely acclaimed, taking its place at or near the top of most annual lists of the year’s best releases. JazzTimes wrote that the album “unites political engagement with a soul-deep connection to nature… rich with ineffable majesty, [the suite] fully engages with tensions at the heart of the American experience.”

Saturday’s line-up includes a newly-composed piece for the trio New Dalta Ahkri, in which Smith is joined by saxophonist and flutist Dwight Andrews and vibraphonist Bobby Naughton. That trio, Smith says, continues to expand concepts inaugurated with his influential early trio, the Creative Construction Company, with fellow AACM pioneers Anthony Braxton and Leroy Jenkins. “That trio set the pace for the idea of an ensemble that didn’t have a set bottom, middle and top,” he says. “It sits in a zone that’s quite unique.”

The evening continues with “Dark Lady of the Sonnets,” a piece dedicated to Billie Holiday and originally recorded in 2011, by Smith’s Mbira trio with akLaff and pipa virtuoso Min Xiao-Fen. Mbira will then be joined by the RedKoral Quartet, a string quartet specially assembled to perform Smith’s music, and a pair of vocalists for excerpts from his “Rosa Parks Oratorio,” originally premiered during the 2016 FONT Festival of New Trumpet Music. The Oratorio, Smith says, “is not a portrait of Rosa Parks. It’s my view of how she generated her ideas, her courage and her notions about how to resolve conflict.”

The RedKoral Quintet, comprising longtime collaborators Shalini Vijayan and Mona Tian (violin), Lorenz Gamma (viola) and Ashley Walters (cello), will then premiere Smith’s “String Quartet No. 9” and the first movement of “String Quartet No. 10,” two of the latest in a book of music begun in the mid-1960s. “No. 9” features four movements dedicated to female African-American pioneers in music and the Civil Rights movement (Ma Rainey, Marian Anderson, Rosa Parks, and Angela Davis), while “No. 10” was inspired by the legendary Duke Ellington and also features pianist Anthony Davis.

Sunday’s concert begins with A Thelonious Reflection featuring Smith on solo trumpet in selections from his upcoming TUM recording Alone: Reflections and Meditations on Monk. The Crystal Sextet, an ensemble combining four violas (Stephanie Griffin, Gwen Lester, Tanya Kalmanovitch and Jason Kao Hwang) with Smith’s trumpet and electronics by New York-based sound designer Hardedge will then perform Smith’s 12th Viola Quartet, the “Pacifica,” which was premiered at the 2016 Vision Festival.

Several of the works will be supplemented by images provided by video artist Jesse Gilbert, who Smith says adds integral visual context to the aural elements. “The music and imagery don’t move in separate streams,” he says. “They’re actually intimately connected and responsible for each other, allowing us to create a narrative that transcends space and time. It’s twofold: there’s a technical and musical connection, and then there’s a psychological and historical connection that help to provide for comprehension of the work.”

In order to further that comprehension, Smith (aided again by Gilbert’s images) will offer two afternoon seminars during the weekend, one to elaborate on several of the compositions and the inspirations and approaches behind them, and one to offer insights into his symbolic musical language, Ankhrasmation. Both seminars will be accompanied by premium coffee brewed by Wadada himself and Creole gumbo prepared by Gianna Chachere, executive director and founder of New Orleans arts organization The New Quorum.

Smith chose New Haven’s Firehouse 12 as the ideal venue for the CREATE Festival, calling it “almost a perfect place to play. The size is intimate enough that everybody in the space will feel that they’re part of the performance and can have a clear, engaged audio and visual experience. It’s a strong center for music in Connecticut.”

As with every performance, Smith sees the overall festival as a work in itself, which he calls “Kosmic Music: A Sonic Spectrum of Crystallized Rhythm: Pure – In Eight Parts with Five Ensembles.” In the end, Smith hopes that audiences who attend the festival will come away “with a deeper understanding of how I make my art. I expect that they’ll be more informed about what my music is and therefore they can create a deeper level of appreciation for what I do. Ultimately I wish to create a dialogue about issues of liberty, democracy, art and the connection between human beings.”

A dialogue illustrating Wadada Leo Smith’s music, with a focus on the compositions being performed during the festival, with video images by Jesse Gilbert.

*The Earth, a blue sanctuary of translucent light: Gardens of Fire-flowers, Underground Seas and Pomegranate Lagoons

Dark Lady of the Sonnets

Yellowstone: The First National Park and the Spirit of America –
The Mountains, Super-Volcano Caldera and Its Ecosystem

Crepuscule with Nellie
*Monk and his Five Point Ring at The Five Spot
Ruby, My Dear
Round About Midnight

Pacifica, Viola Quartet No. 12 with Trumpet and Electronics

The Mississippi River: Dark and Deep Dreams Flow the River –
a National Memorial Park c. 5000 BC

Yosemite: The Glaciers, the Falls, the Wells and the Valley of Goodwill 1890

CREATE Festival is made possible by the generous funds from Doris Duke Foundation, Creative Capital, and private donations.