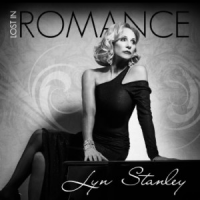 The seduction of sound has many different phases as it effects the listener’s emotions. There is the phase of reflection, which exhumes memories of lovers and lives bygone. Another phase is that of wholehearted hope, which creates conceptually, visually and insightfully into what could be, if one allowed it to be. When a vocalist exercises their talent, all of these must be taken into consideration, in order for the arrangement to accomplish its affect. Lyn Stanley absorbs the seduction of sound as it pertains to the sentiments of the American Songbook, thus creating her first debut album Lost in Romance (A.T. Music, LLC 2013). However you will never find Stanley lost in romance but embedded deep into the heartbeat of the art of romanticizing nostalgia.

Lost in Romance is a multi-layered expose of song with numerous psyches, which when performed, tells a story throughout the music sheets of a quixotic era.

Ms. Stanley’s background as a competitive ballroom dancer influences an elegant flow beyond each arrangement within the project that escorts one across the many moods of an inimitable jazz age. Also through her dance expertise on the floor, she takes those rhythms and tempos she performed in dance and injects those into her vocal resonance. The lyrical themes, along with her stylishness in vocals, become a study in amorous sophistication.

What is so appealing about this decadent debut, along the nostalgic route of the Great American Songbook, is its personality however I don’t mean personality in the conventional way. I am speaking about the sound extracted from those who built this playlists moods. Vocalist Lyn Stanley affords us her talent as she sexes up this projects resume with her nudge-wink sultry sway. The extraordinary musicians that give this project the foundation while acting as the fulcrum between tempos and rhythms, skillfully bonds the many elements of Ms. Stanley’s tonality, which on stage or by wax/disc, seduces the audiences temperament. Plus the added iconic talents of jazz mentor to many, Paul Smith, whose legendary jazz piano styling have influenced hundreds of gifted pianists. Paul Smith left us not long ago but not before introducing the jazz populace to Ms. Stanley and was able to air her finished work before he passed, of which he was of strong influence.

The most intriguing part of Ms. Stanley’s album is how she skillfully marketed her effort. Out in CD form she however used two unusual vehicles to assist in introducing her debut. There is the CD with flash drive that is fully loaded with entire album for the ballroom dance fandom but more impressive is the vinyl two record set. For any music aficionado, vinyl is the crown patriarch of play. Call me terribly traditional but Ms. Stanley’s vocal on vinyl just adds that old school allure to the American Songbook appeal. With only 500 waxed, it has that “Elephant in the Room” affect.

As for the cuts, each and every music sheet has the Stanley signature with her decadent tones and sultry weep appeal. “ One For My Baby” Mercer’s “Dear John” sonnet, it’s the palette of her voice that sits you on the barstool to talk over those tears of broken years. The verbal descriptions continue with Stanley’s interpretation of George Harrison’s “Something” which is a successful effort to recall the “fire in the belly” of romance as one gets trapped in their melodic ingenuity. Each spin has a story, which mirrors a moment in any one listeners life.  Ms. Stanley’s vocals afford us a new hope in jazz but with that old school elegance.

Lost in Romance is a matchless project, with an exceptional cast of skilled artists. The spin in each of its own slices is rhythmically alert and innovatively charged with the old school traditions, bonding with the new school faith in jazz revitalization. Lyn Stanley has us stepping out of the past shadows of patchiness, into a mood of reflective melodic memories. Vocalist Lyn Stanley reflects on her emotions, past and present, becoming lost in all of our romances!

Tracks: Change Partners; Watch What Happens; Fever; That Old Black Magic; The Nearness of You; You Go to My Head; I Just Wanna Make Love to You; My Foolish Heart; What Am I Gonna Do with A Bad Boy Like You; Losing My Mind; One For My Baby; Sugar On The Floor; Too Close for Comfort; Something; The Last Dance