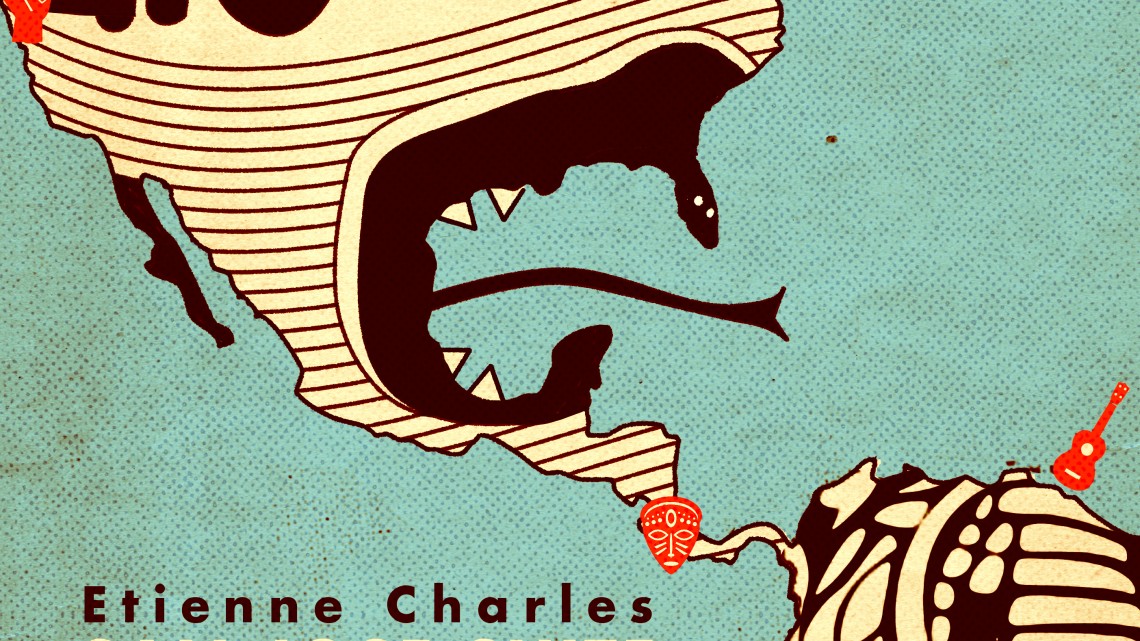 Through his critically acclaimed recordings Culture Shock, Folklore, Kaiso, Creole Soul, and Creole Christmas, Trinidadian trumpeter, percussionist, composer, arranger and professor of music, Etienne Charles, has musically documented the myriad aspects of the African Diaspora experience. He has concentrated on his native Trinidad, the French Caribbean islands, and the territories of the Spanish-speaking Caribbean.

The San Jose Suite, Etienne’s most ambitious project to date, exploits prodigious and protean talents in examining the history of African and First Nation peoples, their confrontation with colonial conquest and terror, and their remarkable and enduring cultural influence.

The vast historical sweep of the Suite stretches from San Jose in Etienne’s native Trinidad to Costa Rica in Central America and San Jose in Northern California.

Etienne starts off with Boruca, a tribute to one of Costa Rica’s First Nations. Every year, the Boruka (or Brunka) people of Costa Rica celebrate their resilience and community spirit with a festival known as the Juego de los Diablitos. This tune is a musical account of the vigil that precedes the juego: a costumed re-enactment of their battle with the Spanish conquistadors. The tune evokes the moods of a village gathering, with food, music and cheer, but also a sombre semblance for those who have passed on. The impassioned interplay of drums, horns, Fender-Rhodes and guitar reminds us of the Boruca’s commitment to their rich heritage.

Limon summons up the history of toil, struggle and tragedy experienced by West Indian immigrants to Costa Rica who came in their thousands to build the railway plantations from the Puntarenas region on the Pacific Coast to the country’s Caribbean port city, and worked in the banana plantations along the rail route. Utilising a slow and deliberate reggae pulse, the piece celebrates the enduring significance of Jamaican culture in the Americas.

The ebullient ‘kaiso’, Cahuita, amply demonstrates the universality of calypso music, and Etienne’s encounter with Costa Rican calypso legend, Walter Ferguson and the Kawe band. Despite the many disappointments and occasions for sadness, the tune proves the universality of celebration, humour, double entendre and unabashed joy among African-derived people in the Americas.

Hyarima – 14th October 1637 is an ode to the first natives of Trinidad. This is a musical account of a vicious attack on the Spanish capital, San Jose de Oruna, led by Hyarima, a feared Nepuyo warrior. Etienne’s unique composition blends a distinctive calypso-inspired groove set up by the bass and drum tandem of Ben Williams and John Davis, with aspects of straight ahead jazz and a 9/8 waltz, uniquely derived from the hybrid Spanish and Amerindian ryhthms found in Trinidad. Etienne aptly describes what he has attempted to do with this composition as “waltzing a Parang waltz”.

Revolt with its dark, percussive mien, evokes the armed resistance of the Africans in Trinidad led by Daaga in 1837. It uses a sombre theme throughout. Hogans’ high-pitched arpeggiated solo and the resolution achieved by electric guitar and keyboards are among some of the highlights of this very dramatic movement.

Juego de los Diablitos is a group improvisation reflecting the Boruca ritual. After an all-night vigil, the Diablitos descend from the hill to pay respect to those in the village who have passed on in that year. In the morning the Juego begins to move from house to house in the village with drumming and fife playing to accompany the Juego, where costumed Diablitos donning ornate masks clash with a bull, symbolizing the Spaniards.

Muwekma, inspired by a chant from one of California’s important First Nation peoples, is a ballad of remembrance, employing several keys which carry the movement demonstrating the nomadic nature of the Muwekma Ohlone – forced into their peripatetic existence through the foreign invasion of their lands. Etienne’s warm and eloquent solo shines and illuminates the composition.

Song for Minh reflects on the effects of modern-day conquest on our communities. There are always victims left in a severe state whenever greed gets involved.

This leads to the quick-paced Gold Rush 2.0, and ode to the Tech boom of Silicon Valley which has unleashed a new wave of homelessness, poverty and desperation in the Bay Area of Northern California. This composition draws a parallel to the California Gold Rush of 1849 and demonstrates the staggering breadth of the music encompassed in the Suite. It is a lively Latin-influenced number. Alex Wintz’s expressive electric guitar echoes eerily in parts in between the be-bop repartee of saxophonist Hogans’ and Etienne’s declamatory trumpet.

Speed City is arguably the funkiest and hottest movement of the entire suite, recalling the likes of James Brown, BT Express and Sly and the Family Stone – but still retaining a solid jazz sensibility, especially with the lance and parry interplay between saxophonist Brian Hogans and Charles’ fiery trumpet. The composition highlights the battle to desegregate San Jose State University and the pioneering work in that conflict by Professor Emeritus Dr Harry Edwards, who was also instrumental in the foundation of the Olympic Project for Human Rights which led to the iconic Black Power Salute by Gold and Bronze medalists Tommie Smith and John Carlos when the US anthem was being played during the 1968 Olympic Games. Highly danceable and infectious, the tune shows the unmistakable effect of African-American music on a very important period for Black and African consciousness worldwide, which has carried over into modern hip-hop and various genres of today’s popular music.

With this important opus,  Etienne showcases his ability to tell stories with rhythm, candidly drawing parallels between the historical past and the present day, using eloquent melodic themes, vivid harmonic colours, driving grooves and heartfelt improvisation at the core. The San Jose Suite is a joyous and truly enlightened musical narration of the story of New World peoples told by one of today’s most accomplished griots.