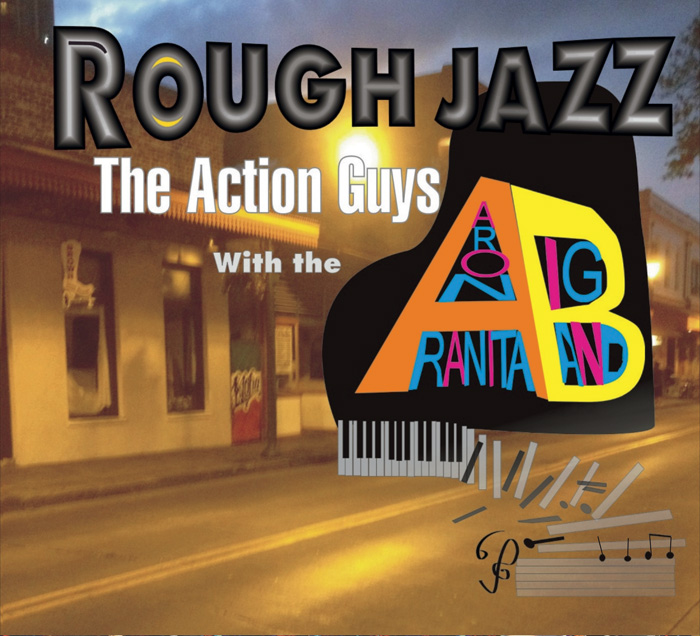 Jazz, naturally, has a rich and varied history but it could be argued that it misplaced a little something on its way to becoming a Respected Art Form. Not to imply that jazz shouldn’t be taken seriously, but there is such a thing as taking a thing too seriously. Louis Armstrong, Fats Waller, Thelonious Monk, Duke Ellington, and Count Basie are among the music’s most important artists ever but they never shied away from being entertainers—aside from musical excellence, they always showed their audiences a good time. Saxophonist, composer, lyricist, arranger, and bandleader Aaron Aranita knows this—and out of that knowledge emerges the Aaron Aranita Big Band (aka The Action Guys) and their debut Rough Jazz. This disc is a powerful capital-S Statement—these are men with a Message and the word is: Have a grand time! Not to imply the contents of Rough Jazz are frivolous—this is top-shelf, hard-swinging, inventive big band jazz in the grand tradition of the orchestras of Count Basie and Woody Herman. But there’s plenty of humor in the lyrics and singing therein—parody, satire, and plain old patent-pending inspired silliness. Gents such as Waller, Cab Calloway, and patron saint of hepcat humor, Slim Gaillard, made audiences laugh while making their feet tap and engaging their brains with classy, earthy swing…and Mr. Aranita carries on in that tradition.

For over 35 years, saxophonist, flutist, composer, bandleader, and lyricist Aaron Aranita has been making music in a dazzling array of contexts from Boston to Japan, finally settling in Hawaii. Aranita has accompanied R&B icons The Temptations and Natalie Cole; old-school entertainers Andy Williams, and Jim Nabors, Boston fusion combo Birdland, and the Hawaiian PBS Big Band. Obviously Aranita is not one to put all his musical eggs in one basket—in fact, he’s gone so far as to create his own “basket,” to tap into a need that some folks didn’t even know was there. (Isn’t that the American Way, after all?) Rough Jazz is the response to that entity known as Smooth Jazz—on the opening track, singer Garry Moore lays it down for us: “I don’t want any kind of fluff jazz / it’s got to be more than enough jazz / that can blow my blues away!” The band swings with the precision of the legendary Thad Jones/Mel Lewis Big Band and with the joie de vive of the Basie band when it was fronted by the suave, bluesy vocals of Joe Williams 1954 – 1961. In fact, the Basie band was a primo inspiration for Rough Jazz, that 1950s Basie renaissance wherein the orchestra’s arrangements were by Quincy Jones, Neal Hefti (who wrote the ‘60s TV Batman theme, not so coincidentally), Sammy Nestico, and Ernie Wilkins, when blaring brass, rich banks of reeds, uninhibited swagger, and suave singing blew away the whitebread pop of the ‘50s.

If while listening to “Home Cookin’” you find your mouth watering and licking your lips in anticipation, it’s no accident. “I was writing the melody and chords of “Home Cookin’” on the piano and at the same time cooking a pot of gumbo in the kitchen,” Aranita said. “I kept running back and forth between the kitchen and studio reading the cookbook and music sheet. Then after a while it kind of made sense together.” (Don’t you love it when a fellow really throws himself into his work?) Another vivid story-song is “The Big Banditos,” of which Aranita says, “I like Western movies and I wanted to make my own Magnificent Seven.” With a hip-shaking “Sing, Sing, Sing”-like intro, the deep, poised voice of John Hulaton paints a picture of a Mexican bordertown intrigue wherein musical instruments are the weapons of choice rather than pistolas. This tune alternate between ominous, darting swing, affectionate parodies of mariachi and Afro-Cuban jazz (think Machito, Dave Valentin)—it’s so vividly detailed you half expect Clint Eastwood to kick in your door, but it’s cool, because while he’s carrying, it’s a trombone! And to put the icing on the gravy, the renowned Russian expatriate trumpeter Valery Ponomarev and former member of Art Blakey’s Jazz Messengers, is a guest in the two-fisted world of Rough Jazz.

WHY, the cry from crowds the world over, why is this big band platter SO different from most similar offerings? Aranita means to uphold the tradition of when songs told stories. “I dig Cab Calloway and Louis Jordan,” testifies Aranita, “[they performed] songs that are stories are cool like [Calloway’s] “Minnie The Moocher.” Beyond the jazz sphere: “I always liked ‘A Boy Named Sue’ (by Shel Silverstein, made famous by Johnny Cash) and [Ray Stevens’] ‘Guitarzan.’ Roger Miller’s ‘King Of the Road’ strikes a chord,” said without punning intent. The Great American Songbook has a similar continuum, songs extentions of storytelling (in the context of a Broadway show). “I love all the standards from Cole Porter, George & Ira Gershwin, Rodgers & Hart.”

“I read a lot of comics growing up and the idea of the Action Guys is the result of that, along with Kung Fu movies (especially with English dialogue), private detective movies and TV. (Think Peter Gunn, Perry Mason, It Takes a Thief, the original Pink Panther films.) “Beboperoni” is a nifty bit of groovin’ hep talk, evoking the musical raconteurs Lambert, Hendricks & Ross and Mose Allison and more recent heirs to that sphere, The Manhattan Transfer.

Aaron Aranita combines seemingly contrasting aspects of pop culture with dynamic jazz—far-fetched yet immediate and exciting stories melded with tightly-arranged, large-ensemble swing performed with plenty of panache and concise, heartfelt soloing. Rough Jazz will hit your funny bone right smart but it’ll take up residence in your heart and cranium.

Next post THE ASCAP FOUNDATION PARTNERS WITH THE NEWPORT JAZZ FESTIVAL®