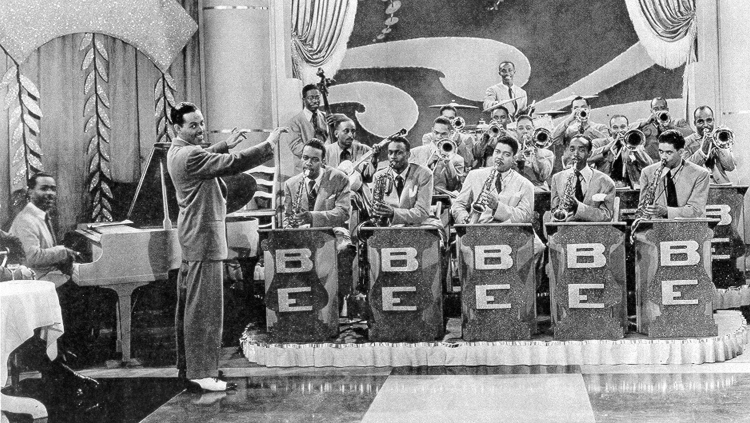 Ken Schaphorst and the NEC Jazz Orchestra draw on New England Conservatory’s exclusive archive of Vaughn Monroe charts, alongside hits by Billy Eckstine – two of the most popular singing stars of the 1940s – in the Music of Vaughn Monroe + Billy Eckstine, a free concert on Thursday, October 17 at NEC’s Jordan Hall, 290 Huntington Avenue, Boston. The concert begins at 8 p.m. For more information, log on to necmusic.edu or call 617-585-1260.

Vaughn Monroe came to New England Conservatory in 1935 to pursue his dream of becoming an opera singer. Five years later years he formed his own big band in Boston and began recording a series of hits for RCA Victor. He continued to have a base there as a nightclub owner but his reach was much broader thanks to his role as a television host and performer, and his many hit recordings, most notably “Racing with the Moon,” which leads off this concert. Although he only studied at NEC for one semester, Vaughn Monroe’s archives were donated to the school after his death. This will be the first concert featuring that donated music.

Another noted vocalist and brass player, Billy Eckstine led one of the most influential big bands in the history of jazz, featuring such giants as Art Blakey, Miles Davis, Dizzy Gillespie, Dexter Gordon, Fats Navarro, Charlie Parker and Sarah Vaughn. He notably broke a color barrier by becoming the first African-American singer to introduce new songs over network radio. The NEC Jazz Orchestra will perform Eckstine’s hits, including “I Want to Talk About You” and “Jelly, Jelly,” as well as the early bebop classics “Cool Breeze” and “Oo Bop Sh’bam.”