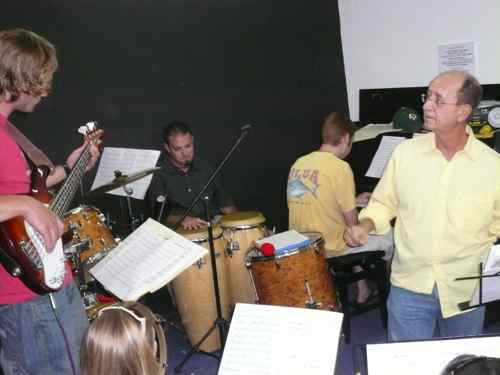 THIS SATURDAY, AUGUST 17th
at 12 noon

Master Class description
The master class will focus on different Brazilian music styles, with their characteristics, including phrasing. General concepts as well as particular ones will be approached throughout demonstration, using different instruments.  It is open to students and musicians of differente instruments (and levels), including vocal.

Antonio Adolfo – a short bio
Antonio Adolfo grew up in a musical family in Rio de Janeiro (his mother was a violinist in the Brazilian Symphony Orchestra), and began his studies at the age of seven. At seventeen he was already a professional musician. His teachers include Eumir Deodato and the great Nadia Boulanger in Paris. During the 60’s he led his own trio and toured with singers Elis Regina and Milton Nascimento. Adolfo wrote tunes that gained great success and have been recorded by such artists as Sergio Mendes, Stevie Wonder, Herb Alpert, Earl Klugh, Dionne Warwick, and others. He won International Song Contests on two occasions. As a musician and arranger he has worked with some of the most representative Brazilian names, besides having released more than a dozen albums under his name. In 1985 Mr. Adolfo created his own school in Rio, Brazil. His recent albums include US releases such as Antonio Adolfo & Carol Saboya Ao Vivo/ Live, released in 2007, Antonio Adolfo and Carol Saboya La e Ca/Here and There, released in 2010 and Chora Baiao, in 2011. And now, 2013, Antonio Adolfo is releasing his new CD Finas Misturas (Fine Mixtures)/ Among his books releases, we can include Brazilian Music Workshop (1994, Advance Music/ Schott Music Publishing) and Phrasing in Brazilian Music (2005, Advance Music/ Schott Music Publishing)”

Next post The Marc Rossi Group Live at The LilyPad