REVIEW: VOCALIST JAZZMEIA HORN HAD THEM EATING OUT OF HER HANDS AT SPOLETO by LARRY RENI THOMAS 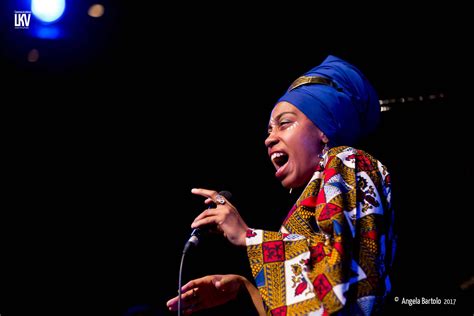 “I didn’t choose jazz.  It chose me.  When I was a teenager I heard Sarah Vaughan sing and I knew that’s what I wanted to do,” said the Dallas-born, Manhattan resident, 27-year-old vocalist extraordinaire Jazzmeia Horn, during a May 28, 2018, interview in a hotel lounge, hours before her seriously hip. captivating concert at the Spoleto Festival, in Charleston, South Carolina. Horn, a petite, pecan-colored, pleasant, person, who wore the ancient African symbol Ankh (“Immortality”) symbol ring on her hand, was dressed in a black head wrap, a baby blue blouse, long green skirt and brown sandals.  She looked like a young Nina Simone, like an extremely proud, conscious artist on a serious mission.

“How does it feel to be the hottest thing out here?” I asked.  “It feels great!” she said, without hesitation.  Then she smiled and let out a great big laugh, as if she hadn’t really thought about it or had never been asked that question before.  “I am happy, humbled, honored and blessed to have been around encouraging musicians such as Wynton Marsalis, Jimmy Heath and countless other musicians in the jazz community, especially in New York.  It’s been quite a journey, from winning the Thelonious Monk and Sarah Vaughan competitions, to going to classes at The New School, to working at Applebee’s in Times Square, to my album ‘A Social Call’ being nominated for a Grammy, to performing at the Grammys. It’s all been good!”

“Most of my friends and fellow musicians my age are hip-hop artists,” she continued.  “But I embraced jazz.  When people say that it’s dead and for old people.  I say I’m ancient.  I am old. I honor the ancestors.  My hip-hop musicians and friends told me that today’s hip hop record producers told them that in order to sign a contract they must agree to use profanity.  No profanity no contract no record.  I remember being on my first tour out of the country a few years ago and performing in Ukraine. Different food, different language, different culture.  Strangely enough, they knew almost all the words of the hip-hop tunes and the names of all the hip-hop artists.”

“I grew up singing in the missionary Baptist church. I started singing as a child,” she said. “Most of my family members are musicians.  My dad is minister.  My name Jazzmeia was given to me by my grandmother, Helen Horn.  My grandmother was a classically trained concert pianist and vocalist.  After she finished the conservatory, she was denied employment in the classical field because she was black.  She became a jazz musician.  It was difficult for her because she couldn’t make it in Dallas so she moved to New York.  She couldn’t make it there either because she was from out of state, so, she was not permitted to have a cabaret card.  So, she moved back to Dallas, and became a pianist and vocalist in the church.”

Jazzmeia considers herself a logical extension of her grandmother’s legacy and of her grandmother’s love for jazz.  She calls herself a “Conjure woman” whose purpose is to present music that heals and addresses social injustices.  Her performances clearly reflect that and the well-received, superb concert at The Spoleto Festival, in Gaillard Auditorium, in Charleston, South Carolina, the night of May 28, 2018, was no exception.

Dressed in a colorful African dress and matching head wrap, she came on stage with a six piece ensemble and started out by disarming the near capacity crowd when she leaned into the microphone and said in her best Texas accent; “Hey, you’all.” After the crowd laughed, she told them:  “I figured I could say that since I am down South.”

She started the show with Betty Carter’s “Tight” the swinging tune that Jazzmeia sung righteously and flawlessly.  Her scatting was very original and exceptional.  The band laid serious foundation for her and allowed her, as she put it, to “float.”  The first selection, “Tight” was not only the best one of the night’s concert, it set the pace for a rest of the night.  Her acrobatic voice was like a missile.  The lively music kept her grounded.  The band was directed by the very gifted, pianist, Victor Gould. He is also on Jazzmeia’s recording “A Social Call.”   Other members included trumpet player Josh Evans, whose hot licks added spice to Ms. Horn’s smooth, soulful rendition of the Jimmy Rowles ballad—“The Peacocks.”   The band also included a group of fine musicians: Marcus Miller, saxophone, Corey Wallace, trombone, Barry Stephenson, bass and Henry Conerway III, drums.

Other highlights of Jazzmeia Horn’s Spoleto concert was her singing of two songs that spoke to the social injustices that Ms. Horn feels she must address because, according to her, they are still with us.  She gave a long monologue talking about racism, homelessness, war and poverty, before she sang “People Make the World Go Round.”  Near the end of the concert, she sang, sounding like an angel from heaven, “Lift Every Voice And Sing” or the Negro National Anthem. One African-American lady in the audience stood up when she heard that selection, placed her hand in the air momentarily, then, she sat down as quick as she stood up.  Ms. Horn followed the first verse of The Negro National Anthem with Bobby Timmons’ “Moanin.”

The Jazzmeia Horn Septet received a well-deserved standing ovation after they finished what they thought was their last tune of the evening. The crowd requested an encore and they weren’t disappointed when the band finished the night with a spirited song that sent the smiling concert goers home to remember the night Jazzmeia Horn had them in her hands for ninety fun-filled, uplifting minutes.