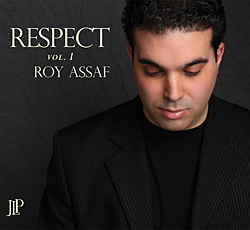 While growing up in Tel Aviv, pianist Roy Assaf spent untold hours listening to his brother’s collection of jazz recordings, fascinated by the musicianship of the players and wondering about his own, to-be-developed talent.  Such talent as the greats might take note of come through loud and clear on his debut release Respect, his first major release as a leader and first CD on Jazz Legacy Productions label 03/05/2012.

“I never thought my playing could ever reach the levels of what I was listening to,” Assaf commented.  “My brother used to beat me up for taking his records out without his permission but I couldn’t help it.  I was so amazed by the music I would hear—Charlie Parker, Dexter Gordon, Bill Evans, Miles Davis. I guess somehow a little of what they were trying to communicate sunk in so that now when I plan, I try to keep those great player in my head.”

All compositions were composed by pianists from 1938 to 2010.

“I wanted to make an album that would show the world how much the music of the greats has meant to me,” Assaf says of Respect. “Reuben and Greg are incredible musicians who play like we are of one mind.  Reuben’s bass lines are fantastic with my playing. Together with Greg’s swing, we become a rhythm section that anticipates one another’s moves.  To me, that’s like playing as though we have one mind.”

Roy Assaf is Israeli born of an Egyptian mother and an Israeli father.   The youngest three boys, all three became jazz musicians.    Two of them, Roy and his brother live in New York City, the center of the jazz world.  Roy is the youngest son who began his formal classical training at the Tel Aviv Conservatory at the age of 8.  In 2003, after being awarded several scholarships to the Berklee College of Music, Assaf moved from Israel to Boston to pursue his undergraduate studies there.  While at Berklee, he studied with such distinguished musicians and teachers as Joanne Brackeen, Danilo Perez, Kenny Werner, Michel Camilo, Richie Beirach and Sonny Bravo.  Assaf graduated from Berklee in 2005 and was awarded a BA cum laude.

In May of 2005, Assaf was invited to perform at the Promising Artist of the 21st Century Performance Series in Costa Rica. Shortly thereafter, he performed with his jazz quartet at the Phoenix Jazz Festival in Kobe, Japan.

In May 2008, Assaf graduated from a two-year program at the Manhattan School of Music, earning a Master’s degree in Jazz Performance. He was fortunate to be mentored by pianists Kenny Barron, Jason Moran and Phil Markowitz, and great saxophonist Dave Liebman.

A pianist with dazzling technique and a composer who expertly weaves jazz harmonies, Assaf was named the ASCAP Foundation’s Young Jazz Composer in 2008.  He made his New York Blue Note debut with the Dizzy Gillespie All Star Big Band in 2007, followed by a European tour consisting of 13 cities.

For more information and to purchase visit: