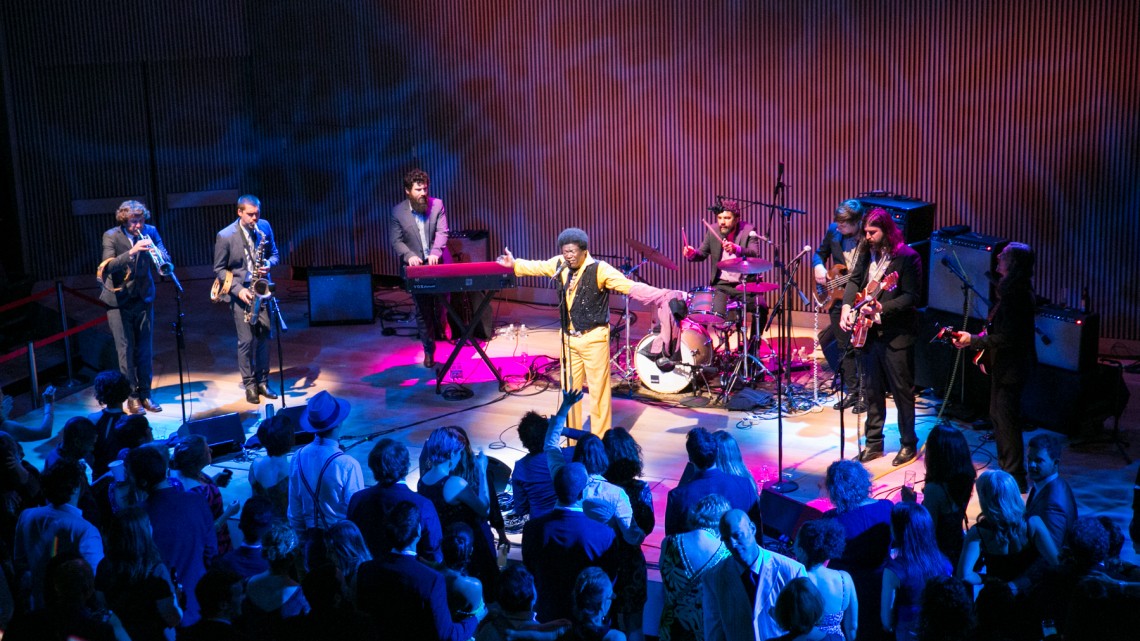 The 2014 SFJAZZ Center Gala on May 16, 2014 in San Francisco awarded Herbie Hancock the SFJAZZ Lifetime Achievement Award.  With more than 600 guests, the Gala raised over $1.4 million for SFJAZZ artistic and education programs. Festivities included performances by Hancock with the star-studded SFJAZZ Collective, the award-winning SFJAZZ High School All-Stars with Paula West and alumna Elena Pinderhughes, the DessertJam with Rock and Roll Hall of Famer Booker T. Jones, and an AfterJam Concert with Charles Bradley and His Extraordinaires plus Dorothy Moore.

“The great friends of jazz really proved their faith in SFJAZZ to deliver the goods,” Donald Derheim, SFJAZZ Chief Executive Officer, said with a smile. “It is a wonderful affirmation that jazz, our truly American Art form, is needed in the community and the classroom.  The genius of it is that SFJAZZ has a home and a platform to truly craft a great jazz experience for the people of San Francisco and around the world.”

“The SFJAZZ Center seems built to embrace the genius of Herbie Hancock, both being stand-alone entities for jazz whose work inspires and educates, and as larger positive effect on the world stage,” says SFJAZZ Gala Chair Robert Mailer Anderson. “Being able to raise this money for education and artistic programs, hearing all this amazing music and Wayne Shorter’s words, you are reminded that this is about evolving, musically, culturally, and as a people. It was an unbelievable night full of fun and funk, classic jazz, and a whole lot of soul.”

Hancock is one of the great innovators and icons of modern music. A 14-time Grammy Winner, UNESCO Good Will Ambassador and a recipient of 2013 Kennedy Center Honors, Hancock has blazed a trail for contemporary culture at every turn in his career.  From his tenure with Miles Davis to creating standards like “Canteloupe Island,” innovative albums like “Headhunters” and the chart-topping “Rockit” – the first Billboard hit to use turntable scratching – Hancock is a true musical legend.

The SFJAZZ Center opened in January of 2013 in San Francisco’s vibrant Hayes Valley neighborhood.  It is the only stand-alone facility designed and dedicated specifically for jazz in the United States. The award-winning LEED Gold certified center offers the superb acoustics of a great concert hall and the relaxed intimacy of a jazz club.  The SFJAZZ Center has become a peerless hub of art, music, culture, and community and has now taken its place alongside other major arts institutions such as the San Francisco Symphony, San Francisco Opera, and San Francisco Ballet in the Civic Center performing arts district. SFJAZZ is a worldwide leader in jazz presentation, creation and education, and in fostering and inspiring the next generation of jazz audiences and musicians.