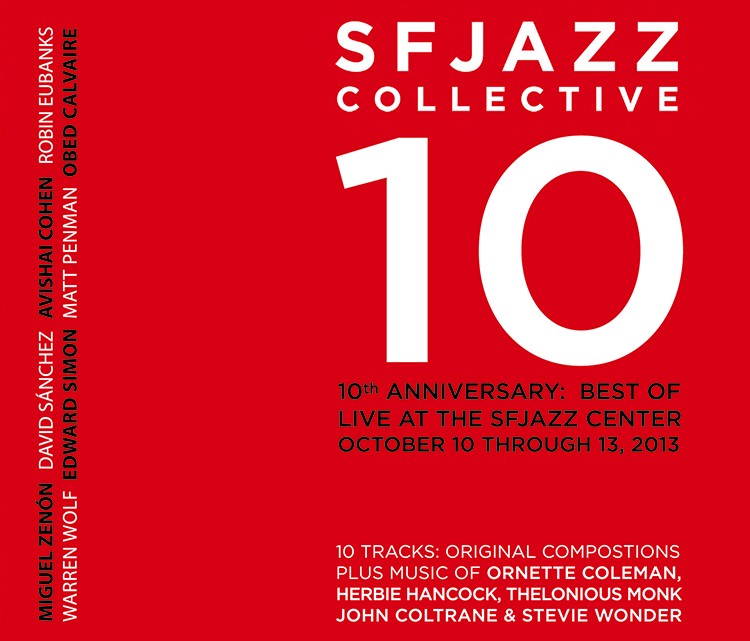 The SFJAZZ Collective comes together to rehearse, refine, and then perform the music for audiences in San Francisco, around the country and the world. This is still an intriguing idea – and a rarity in the jazz world – that has given rise to one of jazz’s most exciting ensembles and produced more than a few compositions and arrangements that bear repeating. There are ten such keepers on this celebratory 10th Anniversary album which covers a rich cache of music spanning a decade of the Collective’s work, recorded live by the current incarnation of the octet during its smashing four-night run at the new SFJAZZ Center in October, 2013.  Performing for packed audiences in acoustically fine Robert N. Miner Auditorium, the Collective performed 16 selections from the band’s vast repertoire and culled ten of these recordings for this limited edition album.

This year, the SFJAZZ Collective will perform new arrangements of the bracingly original music of Joe Henderson, the late tenor saxophone giant, multiple-Grammy winner, and composer who lived in San Francisco and was long associated with SFJAZZ.   This material along with new original compositions will be recorded at the SFJAZZ Center from October 23-26, 2014 and a new multi-disc package will be released in early December 2014.

Throughout its existence, Miguel Zenón says, “The Collective has featured some of the greatest musicians in jazz, the current configuration being no exception. For me, being around such a level of musicianship is very inspiring. It pushes to me to work harder and try to get better at what I do. Naturally, people become very close when they spend this much time together, so we’ve developed a sort of family environment which makes making music together even better.”

1.) And What If I Don’t – Herbie Hancock (arranged by Gil Goldstein)

9.) When Will the Blues Leave – Ornette Coleman (arranged by Gil Goldstein)

Next post CD Release: Mostly Other People Do the Killing, Blue