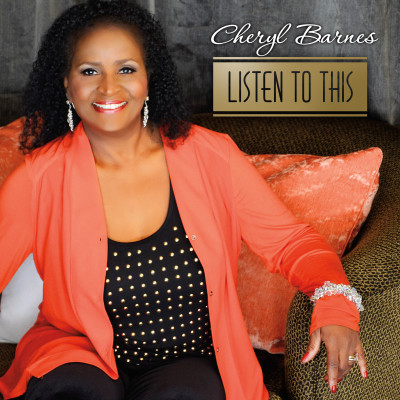 Los Angeles, California… “Listen To This,” the debut CD from eclectically-trained Jazz vocalist Cheryl Barnes, was released on February 18, 2014, via Barnes & Cabasso Music. Highlighting twelve tracks steeped in Jazz and Blues, “Listen To This” was produced by music industry veteran Rahn Coleman. It was recorded at Mystic Knight Recording Studios in Los Angeles and features a stellar list of sidemen including Brandon Fields on Sax, John Hammond on Piano, and Rickey Minor on Bass with Orchestration by John Beasley.

Known principally as a Jazz singer, Cheryl’s versatility encompasses many musical genres. Singing in four different languages, Cheryl has performed around the world (including shows with Wynton Marsalis, J.J. Johnson, Quincy Jones and a guest member spot with the Clara Ward Gospel Singers), and has recorded with the likes of Skip Scarborough, Azar Lawrence, Billy Mitchell and Cathy Segal-Garcia. Her sixteen years of Operatic training have brought her to the stage as a featured soloist with the Denver Symphony Orchestra, the Florida Orchestra and The Lawrence University Orchestra in Wisconsin, and she has toured extensively throughout South America, nurturing her love for Samba, Bossa Nova, Salsa and the riches of Latin and Afro-Cuban Music.

A sought-after vocal clinician conducting numerous workshops and clinics across the U.S., Barnes is also a founding member of the Jazz Vocal Coalition and retains an esteemed musical presence in Los Angeles, having been heard on stages ranging from The Los Angeles County Museum of Art’s prestigious Friday Jazz Series to the Hollywood Bowl to the House of Blues.

Barnes’ varied background makes itself apparent in the choice of songs which she has chosen to sing on “Listen To This.” From Mark Winkler and Marilyn Harris’ lovely portrayal of a veteran Jazz singer with an extraordinary life in “Afternoon In Harlem” to the spirited, party-like jazz vibe of the title track “Listen To This” (written by Barnes’ husband –arranger, musician, physician Phillip Cabasso) to Barnes’ own, powerful interpretation of Joni Mitchell’s “Come In From The Cold,” Barnes’ album is amply reflective of her deep-rooted musical training as well as her love of infusing different musical styles within her chosen material. But what sets this project apart is Cheryl’s incredible voice, which imbues each word she sings with a beauty and clarity all its’ own, taking the listener along on an extraordinary journey as the story of each song unfolds. “After years of touring and working with a multitude of artists, I’ve decided now is the time to focus my energies on my own CD,” said Barnes, “It’s been a long time in the making and I’m very proud of both the music and the breadth of the songs and musicians on this album.”