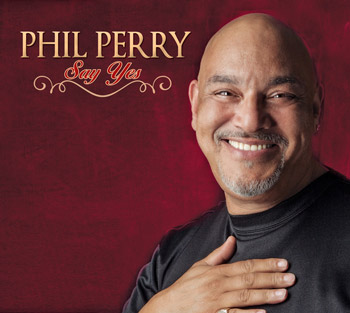 New York, NY: A great vocalist has a way of inhabiting a song, living it and making it their own. It takes especially great powers of interpretation for a singer to take a song definitively recorded by a legendary artist and give it new life with a fresh interpretation. Phil Perry takes on the ultimate challenge with the opening track of his new album, the indelible “You Send Me,” recorded in classic style by the peerless Sam Cooke, whose own unique phrasing style actually shapes the melody of the tune, which he wrote. Yet Phil Perry transforms the song while still retaining its essence, opening in “old school” style and then transmuting it into contemporary soul music. Few singers around today could have done it but those who have experienced the magic of Phil Perry’s talent will not be surprised.

On March 12, 2013, Shanachie Entertainment will release SAY YES, Phil Perry’s latest—and quite possibly, greatest—album. With special guests Chanté Moore and Najee, Phil delivers a splendid mix of originals and notable covers in a style befitting the man James Ingram who calls Perry “the most powerful singer I have ever heard.”

“As always, when working with Big Dog (Davis), we try to address all the relevant directions relating to the material,” explains Perry. “We try to keep the classic essence while allowing me to be the artist that I am. What that means is singing the melody without it being sterile, inserting new background ideas and different instrumentation to contemporize the sound without removing the essence of classic R & B.”

Produced by the multi-talented Chris “Big Dog” Davis, who has produced the likes of Will Downing, Maysa, and Kim Burrell, SAY YES, is a beautiful collection of original compositions co-written by Phil Perry and Davis, as well as reinventions of signature hits by such icons as Paul McCartney, Paul Simon, Michael McDonald & Carly Simon and Sam Cooke. The CD features classic songs such as “Bridge Over Troubled Water,” “The Long And Winding Road,” “You Belong To Me” and the aforementioned “You Send Me.” On “Bridge Over Troubled Water,” Davis gives the track a subtle groove which takes the song out of pure balladry and Phil subtly gospelizes it, in short, a fresh approach to a song that has been recorded many times by other artists.

“We were going for identifiability (on the classic cover songs),” Phil says. “Just because you cover a classic doesn’t mean you should lose yourself and what you are as an artist. I think that’s what separates any ‘classic’ endeavor we undertake from anyone else who is doing covers. We respect, then add.”

The original compositions on SAY YES deliver finely-wrought romantic balladry that takes its cue from classic soul balladry but gets just enough contemporary treatment so that it does not sound “retro.”  And always, there is a hint of jazz in Perry’s phrasing. In short, the album is state-of-the-art Phil Perry, exalting and explicating the many facets of love.

Phil Perry has been devoted to music from a young age. Born and raised in East St. Louis, Perry was exposed to the art of great singing early in life. “Growing up I always knew that I wanted to be a singer,” recalls Phil. “I would watch and listen to all the great singers like Nat ‘King’ Cole, Johnny Hartman, Arthur Prysock and Billy Eckstine that my mother listened to while she cleaned the house.”

After a spell as the lead singer of the Montclairs (whose “Begging’s Hard To Do” was a moderate R&B hit and “Make Up For Lost Time” became a cult favorite in British soul music circles) in the early 70s, Phil quickly became one of the most sought-after backing vocalists in the music business. Perry launched his solo career in 1991 with THE HEART OF A MAN, which featured an impressive re-make of Aretha Franklin’s “Call Me,” that hit #1 on the R&B charts. Phil’s 1994 album PURE PLEASURE yielded another hit with his version of “If Only You Knew” and also featured a seven-minute version of The Spinners’ classic “Love Don’t Love Nobody.” Known for his skill in multiple musical genres, Phil began achieving success in the contemporary jazz arena through his featured vocals on albums by Lee Ritenour, The Rippingtons and others. His next solo album, ONE HEART ONE LOVE, hit the Top Five of the Billboard Contemporary Jazz chart. 2000’s critically-acclaimed BOOK OF LOVE was followed by the 2001 album MAGIC, which highlighted Perry’s songwriting prowess.

Busy as a touring artist and in-demand session vocalist—whose credits include work with everyone from Patti LaBelle, Anita Baker, Peabo Bryson and George Duke to Quincy Jones, Barbra Streisand, Boz Scaggs and Rod Stewart—Perry returned in 2006 with CLASSIC LOVE SONGS, putting his own stamp on such tunes as Lionel Richie’s “Hello,” Marvin Gaye’s “I Want You,” and The Temptations’ “Just My Imagination.” The 2007 album A MIGHTY LOVE brought enthusiastic reaction from music buyers starving for the kind of authentic, heartfelt music that has been Phil’s stock in trade.

The father of four, Phil has been actively working to foster Arts education through the Philill Foundation, an organization founded and led by his wife of twenty years, Lillian “Tang” Tynes, a notable soul and jazz vocalist in her own right. “It’s important to me,” Phil says, “because my wife has a vision for a Charter School that educates through all genres of the arts. Also we are both artists so we wanted to give back to the youth through art and education.”

With SAY YES, Phil Perry reasserts his claim as one of the most impressive of a dwindling number of vocalists on the contemporary scene who can deliver musically impressive, emotionally substantive art.

“When I make a record,” Phil says, “my goal is always to make something I can be proud of. As I travel across the country I can definitely say there’s a market out there for traditional R&B. I think this album is a good representation of what classic soul music is in the digital age.”

“The most powerful singer I have ever heard in my life.” James Ingram