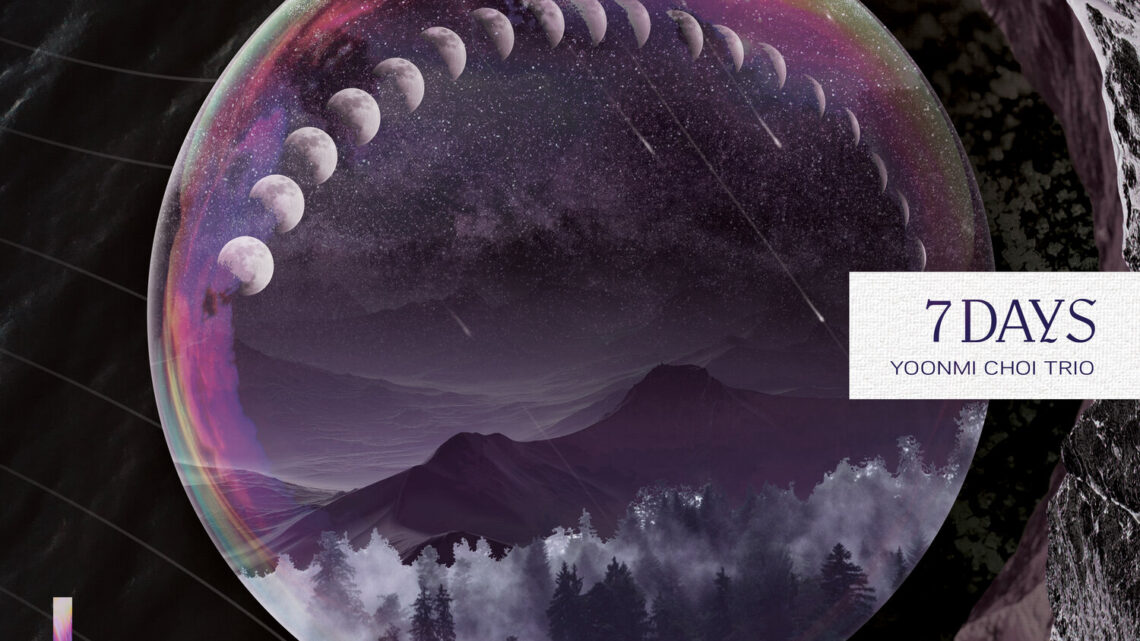 NEW YORK CITY, N.Y. – Pianist and composer Yoonmi Choi is no stranger to the stage, and certainly not to pioneering her unique creative voice. From performing at over 300 venues in Europe, to receiving international acclaim across three continents, playing almost every major jazz festival, and directing the “Girl Behind the Curtain” Musical in Times Square, Yoonmi has pushed beyond the outer limits and expectations of both classical and jazz.  Now, with her trio, Yoonmi presents a bold, Leiden Jazz Award Winning, genre-bending project: 7 Days.

“… Yoonmi’s playing and composing are first rate. She is extremely talented and has unlimited potential to continue developing into a world-class jazz musician.”

Born in Incheon, South Korea, Yoonmi began studying piano at age 3. She continued to study in South Korea as she grew up, and ultimately received her classical and jazz piano education at Sookmyung Women’s University and the Dong-ah Institute of Media and Arts College. Shortly thereafter, Yoonmi took her studies to the Netherlands, where she graduated with the highest performance score at the Prince Claus Conservatoire. It was during her time in Europe that the seeds for 7 Days were planted and began to blossom.

Seven years ago, while touring Italy, Yoonmi had the opportunity to visit the Sistine Chapel, and was enraptured by both the beauty and audacious magnitude of the artwork painted by Michelangelo. “I couldn’t help thinking about his passion and tenacious hard work,” Yoonmi confesses. Inspired, she set out to create a piece in such a vein as Michelangelo’s masterpiece: massive, ambitious, and undoubtedly unified around a single theme.

7 Days, like Michelangelo’s paintings in the Sistine Chapel, draws on the Biblical narrative as the axis around which it revolves. Based on the Judeo-Christian account of the Earth’s creation, 7 Days features seven compositions, each of which adds new elements while building upon the previous to capture the story of the world being created.

Musically, Yoonmi draws upon a unique combination of classical and jazz elements in each piece to sonically describe what, in the narrative, God is creating each day. The album opens with a track aptly entitled 1st Day whose narrative revolves around the concept of light. “God separated the light from the darkness.” Finally we have day and night, morning and evening.” Yoonmi tells. 1st Day begins like a Rachmaninoff concerto to capture the idea of a “deep abyss,” with a short piano improvisation that was performed with that same concept in mind. Yoonmi’s favorite part of this track is the drum solo. “While the piano goes up half step by half step, the drums make sounds like [a] blacksmith,” Yoonmi says. “I wanted to present creative sounds, like a hammer and [anvil].” 1st Day is followed by a track similarly named 2nd Day. “God made the [sky] and separated the water under the [sky] from the water above it.” That was the second day,” Yoonmi recalls. This track is in 7/8 with the kick drum occurring on the uncommon place of the second beat, creating a metrically disorienting atmosphere. This unconventional beat division is used by Yoonmi to capture the essence of how complex and bewildering it must be to witness the sky and sea become physically separated when they were previously congruous.

Yoonmi’s music does not exist in a vacuum, and she praises her band for bringing this album to life. 7 Days features Dutch drummer Samvel Sarkisyan, whom she met during her time in the Netherlands. Praised by Yoonmi as a “brilliant drummer” whose palette of dynamics is diverse and masterful, Samvel’s tasteful coloring of 7 Days is key in bringing the album to life. The last member of this trio is bassist Myles Sloniker – a player with whom Yoonmi connected upon moving to New York. Above all else, Yoonmi describes Myles as having a phenomenal ear that “catches all the details” of harmony, melody, and subtle interactions between band members.

With 7 Days, Yoonmi Choi reaches beyond genres. Where most musicians put together collections of music that reflect themselves, Yoonmi uses a reflection of herself to go beyond the notes and rhythms and carefully, steadily, and unequivocally captures the essence of an ineffable narrative older than time.

About Yoonmi Choi:
Yoonmi Choi was born in South Korea and began learning the piano at age 3. She formally studied piano at Sookmyung Women’s University and the Dong-ah Institute of Media and Arts College where she became skilled at performing and composing in both classical and jazz styles. After graduating, Yoonmi moved to the Netherlands where she continued her studies at the Prince Claus Conservatoire, graduating with the highest possible performance score. During her stay in the Netherlands, Yoonmi performed at over 300 different venues throughout Europe. 2015 saw Yoonmi move to New York, where she received her Master of Jazz Performance from Queens College.

As a sidewoman, Yoonmi has shared the stage with Alex Sipiagin, Gene Jackson, Tony Miceli, Joris Teepe, amongst others on the European jazz scene, and Latin GRAMMY-nominated vocalist Concha Buika. Yoonmi has performed at many of the most noteworthy jazz festivals, including the SF Jazz Festival, Newport Jazz Festival, Red Sea Jazz Festival, NYC Summer Stage, Brace Music Festival, and the Marathon Jazz Festival. As a composer, Yoonmi received the International Leiden Jazz Award in the Netherlands for her composition series, 7 Days.

Currently based in New York, Yoonmi works as the music director and pianist for the “Girl Behind the Curtain“ musical in Times Square and is the Jazz Ensemble Director at the Garden State Opera, Inc.