Singer-Songwriter Lisa Jeanette's latest album JELLYFISH ON THE MOON has hit #4 on the Folk AllianceInternational Folk DJ Radio Charts for the month of March and that she was the #6 Most Played Artist for the same month. Her single “Don’t Blame Me (Jolene’s Reply)” also charted at #13. The record’s break-out advance track “Mrs. Claus” (featuring iconic folk artist Vance Gilbert), debuted at #1 in December. 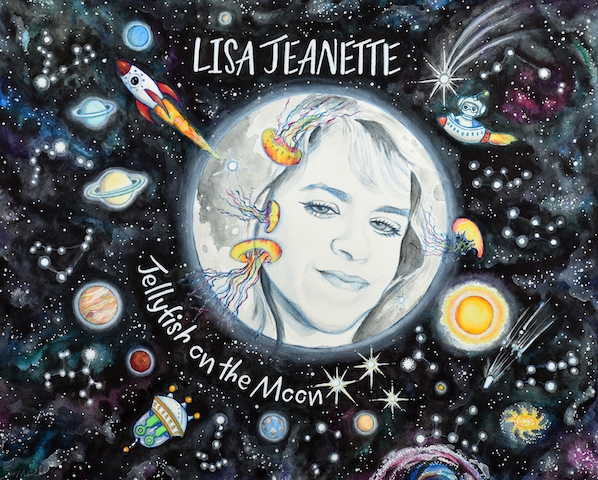 Up and coming singer-songwriter Lisa Jeanette, who has been hailed as an “eclectic and amazing singer-songwriter” (Jon Stein, DJ -“The Hootenanny Café”, WTBQ 93.5), has announced that her latest album JELLYFISH ON THE MOON has hit #4 on the Folk Alliance International Folk DJ Radio Charts for the month of March and that she was the #6 Most Played Artist for the same month. Her single “Don’t Blame Me (Jolene’s Reply)” also charted at #13.

The record’s break-out advance track “Mrs. Claus” (featuring iconic folk artist Vance Gilbert), debuted at #1 in December, helping to garner early support from some of the top folk DJs in the country. Stein and Jim Sereda, host of “The Spin Zone, WUSB 90.1, who subsequently featured and interviewed Jeanette on their programs, highly-praised the record.

With elements of folk, jazz and 1970s pop, DJs, the press and fans alike are drawn to what Jeanette describes as her style of “Kaleidoscope Folk.” She explains that her music is a reflection of the influences that are constantly evolving and changing with time, as well as her exposure to fellow artists that continue to amaze and inspire her. And the only thing as diverse as her sound is her range of topics and themes.

From the wistful to the whimsical – and everything in between –Jeanette’s latest effort leaves no subject unturned. Even its title JELLYFISH ON THE MOON, which is loosely based on the true story of NASA’s experiment of sending jellyfish to the Space Station to study the effects of zero gravity on the sea creatures’ equilibrium after returning to Earth, showcases Jeanette’s creative curiosity and songwriting dexterity.

To ensure that this eclectic eccentricity translated seamlessly, Jeanette partnered with Producer Glenn Barratt of MorningStarStudios,to masterfully record her compositions with both bold choices and musical sensitivity. A “who’s who” of all-star musicians were also brought in to create the magical sound of the album including Ross Bellenoit (guitar), Erik Johnson (drums) and Chico Huff (bass), who provided a wonderful collaboration of ideas and took each song lyric to task, creating a variety of arrangements to keep the listener’s ear attuned.

Surprise guest appearances by renowned artists including Gilbert, who has served as a mentor to Jeanette for several years and contributes his wit and charm to the aforementioned chart-topping “Mrs. Claus,” and the highly-acclaimed Jay Davidson on saxes and flutes can also be found on the album, while spotlight performers lend added surprises to some of Jeanette’s standout songs. One of these tracks is the upbeat albeit comical “Aging Like a Son of a B,” which includes fiddle riffs by Gary Oleyar; while the more serene “Top of the Ferris Wheel” features a frolicking cello played by Michael G. Ronstadt.

The official tracklisting for JELLYFISH ON THE MOON is:

Darling Of The Muses

Never Been To War

Jellyfish On The Moon

For You And I

You Don’t Look My Way

Top Of The Ferris Wheel

I Am Nothing New

JELLYFISH ON THE MOON is Jeanette’s first full album release since her debut album Chasing Happy in 2017. Before the pandemic, shewas busy performing in and around the Philadelphia region at leading venues including The Kennett Flash, The Living Room, and Jamey’s House of Music. She also performed at many festivalsincludingThe Black Bear Festival in Goshen, CT, the Ladybug Festival, Wilmington DE, Turks Head Festival, The Downingtown Arts Festival, the Wayne Porch Festival, and the Chester County Restaurant Festival.

Jeanette’s performance at the 2020 Philadelphia Folk Festival Contest led her to be the first artist booked for the 2021 festival.