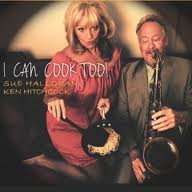 Vocalist Sue Halloran and saxophonist Ken Hitchcock have spent decades in the music business with credits on Broadway, movies and TV, and for the most part doing so separately. Their paths have crossed only a few times with both being members of the New York Saxophone Quartet and the Red Parrot Night Club big band where they met and have been together ever since. I Can Cook Too! Is actually their very first recording collaboration and a tribute to two loves, their love for music and their love for each other. With Sue’s past history as a featured singer on big bands and Ken’s experience as a lead alto player on other bands, performing the music of standards is something they also have in common, love and have chosen as the focus on this new disc.

Though not technically a big band album, all the music served up here has that big band feel to it interpreted well by a cast of players that know how to project an orchestral sound without having a 17-piece orchestra to do it. To achieve this, Sue and Ken called upon Argentinian-born Carlos Franzetti who plays the piano on several tracks and serves as the primary arranger of the album responsible for also including the 31-piece strings of City of Prague Philharmonic on “A Quiet Thing” and the Harold Arlen classic “Let’s Fall In Love.” Antonio Carlos Jobim’s Brazilian standard “Somewhere In The Hills” opens the music with Halloran’s crisp soprano vocals leading the way ably supported by Brazilian guitarist Romero Lubambo’s sharp chords.

The swinging sounds begin to emerge on the Leonard Bernstein’s explosive title track where an eight man ensemble sounds more like a powerful big band complimented by Hitchcock’s multi-reed performance on alto, tenor and baritone saxes. Hitchcock repeats his multi-woodwind statements on several other tracks like on “Hey Daddy,” complimenting Halloran’s reaching vocals with sprite play on the baritone, soprano, flute and clarinet. Franzetti’s arrangement of the “I Got It Bad / Autumn Nocturne” song allows Halloran to voice the tune with a measure of tenderness marking one of her brighter moments.

The saxophonists introduces “I’ll Take Romance” with a sizzling tenor solo blowing the house down capturing the first two minutes for himself before partner Halloran weighs in with romantic lyrics and a little scatting to boot. The album’s finale “My Funny Valentine,” is a humbling tribute to Manfred Knoop of the Knoop Music Recording Studio and director of the Elizabeth R.C. Church, who passed away on Valentine’s day in 2011. No doubt about this rousing endeavor, I Can Cook Too! Is a tasty musical recipe by an enticing vocalist and a superb reed man who together, craft a compelling and truly enjoyable album of selective standards flavored with a measure of spice and swing, well done!