The DC Jazz Festival and The Kennedy Center Proudly Present 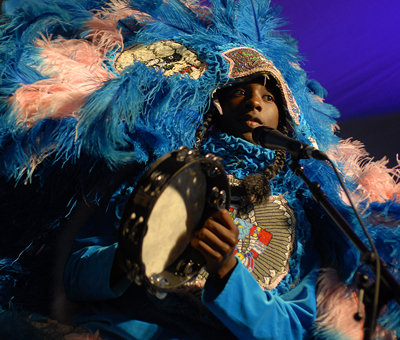 June 1, 2011, Washington, D.C.—The DC Jazz Festival (DCJF) and The John F. Kennedy Center for the Performing Arts will present A Night in Tremé: The Musical Majesty of New Orleans on June 13, 2011 in the Kennedy Center Concert Hall at 7:30 p.m. The closing concert of the DC Jazz Festival, this performance will feature the legendary Rebirth Brass Band; Mardi Gras Indian Chief, alto saxophonist, and Musical Director Donald Harrison, Jr.; singer and trumpeter James Andrews; clarinetist Dr. Michael White; and funky trombonist Big Sam Williams. Wendell Pierce, the smooth-talking trombonist Antoine Batiste on the HBO® series Tremé, will provide narration about the history of the neighborhood and the struggle to repair and rebuild lives after Hurricane Katrina.

“In 2009, when the festival celebrated New Orleans, and honored Jazz Master Ellis Marsalis, I told him that each year the DCJF would have a feature about New Orleans,” said DC Jazz Festival Executive Producer Charles Fishman. “We are proud to present these renowned artists from Tremé, enabling our audience to enjoy and further appreciate the music, history and culture of the great city of New Orleans.”

A Night in TREMÉ: The Musical Majesty of New Orleans is a national touring project, produced by Absolutely Live Entertainment, in conjunction with the airing and promotion of the second season of Tremé. From David Simon and Eric Overmyer (both of The Wire®), Tremé follows musicians, chefs, Mardi Gras Indians, and ordinary New Orleanians as they try to rebuild their lives, their homes, and their unique culture in the aftermath of the 2005 Hurricane Katrina and levee failures that caused the near-death of an American city.

The Tremé neighborhood of New Orleans has been a source of African American music and culture for as long as cooks in the Crescent City have been serving red beans and rice on Monday nights. Birthplace of the great New Orleans brass band tradition and one of the first black neighborhoods in America, Tremé (pronounced truh-MAY) is the heartbeat of New Orleans and the home to Congo Square.

The DC Jazz FestivalSM is a project of Festivals DC, Ltd., a 501©3 non-profit service organization. The DC Jazz Festival is sponsored in part with a grant from the Government of the District of Columbia, Vincent C. Gray, Mayor; and, in part, by awards from the National Endowment for the Arts, and the DC Commission on the Arts and Humanities. © 2011 Festivals DC Ltd. All rights reserved. For more information, visit www.dcjazzfest.org.

About Kennedy Center Jazz
Kennedy Center Jazz presents legendary artists who have helped shape the art form and rising artists who are emerging on the jazz scene in more than 30 performances a year. Launched in 2002 and dubbed “the future of the jazz nightclub” by JazzTimes, the KC Jazz Club hosts hot new talents and seasoned jazz veterans in an intimate setting. Annual Kennedy Center jazz events include NPR’s A Jazz Piano Christmas, the sold-out Kennedy Center holiday tradition shared by millions around the country via broadcast on NPR; Betty Carter’s Jazz Ahead, the Center’s national jazz residency program for musicians under 30 with renowned jazz artists; and the Annual Mary Lou Williams Women in Jazz Festival, the first comprehensive festival of this kind created in 1996 by Dr. Billy Taylor. The Kennedy Center showcases new jazz talent by presenting hot up-and-comers for under $20 in the KC Jazz Club. The Center’s jazz concerts are frequently recorded for future broadcast on JazzSet with Dee Dee Bridgewater. Kennedy Center Jazz has produced such recordings as Taylor Made at the Kennedy Center featuring Billy Taylor’s original compositions; Up On the Roof: The Best of Kennedy Center Jazz on JazzSet, Vol. 1, featuring performances recorded live at the Kennedy Center; and live recordings from such artists as Mulgrew Miller, Cedar Walton, Roseanna Vitro, Toshiko Akiyoshi, and Rufus Reid, among others. Dr. Billy Taylor (1921-2010) served as the Center’s Artistic Director for Jazz from 1994-2010.

Audi of America, Inc. is the Presenting Sponsor of the KC Jazz Club.