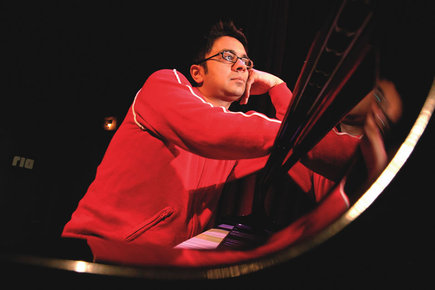 For the evening portion of the programming, Vijay Iyer walked on stage at the Glenn Gould Studio for a solo piano performance as part of the Grandmasters Series. The young and highly acclaimed pianist was the centre of attention with interpretations from well-known tunes to his own compositions featured on his last album. He put the audience right from the start into a quiet contemplative mood with a meditative piece, “Heart Piece,” that continued into “Epistrophy” in honour of Iyer’s icon, Thelonious Monk. One moment he made use of Monk’s slow percussive style of playing and the next moment he got right into a hurried style demonstrating his fast and technically adept hands. “Autoscopy,” was one of the deepest and somewhat somber pieces of the evening as it represented the definition of the title: an out of body experience where you leave your body and watch it from above. That would change later with his take on another modern idol, Michael Jackson, with “Human Nature. On Duke Ellington’s “Black and Tan Fantasy,” Iyer was able to maintain the marching beat of this funeral procession while adding a measured degree of freedom in his take on the classic. Vijay Iyer also brought in pieces by Andrew Hill, John Coltrane, and Sun Ra. It was clear for all to hear why he was voted the 2010 Musician of the year by the Jazz Journalists Association.

For something totally different, a large crowd converged on the Sony Centre. Return To Forever (RTF) IV was all the buzz leading up to the Tuesday night stop in Toronto and the jazz-fusion group did not disappoint. In fact the show was vibrant and exhilarating. At times you could feel the vibrations on your face.
Chick Corea actually turned 70 a couple of weeks ago and has no reason to slow down.

Frank Gambale is not at all a newbie for this band formation since he worked with Corea on the Electric Band. Gambale’s favourite style is the sweep picking technique where, as the name suggests, the guitarist sweeps the strings resulting in a precise sequence of desired notes.

Jazz violinist Jean-Luc Ponty has also collaborated with Corea a while back. With RTF, he provides a key ingredient that gives this edition of the band a distinct characteristic. He seems to complement Corea while Gambale’s guitar works with Stanley Clarke’s bass. The versatile and intense Lenny White is as strong as ever on the drums. Corea said during the show that White changed jazz drumming in the 70s. He too is a veteran to Miles Davis’ electric period which was definitely present. During the show, he walked up to the mic and explained how the RTF is a “man’s band” in comparison to other bands that lack the true musical abilities and depth that this group always had. Band members were really enjoying themselves from start to finish and at one point were high-fiving each other like guys in a sports team.

Corea and others toyed with the audience by saying that they were not going to introduce any of the selections yet long time fans were able to pick out the well-known classics from the band’s history such as “After The Cosmic Rain, and “Hymn Of The 7th Galaxy.” Some band members also had their own favourites.
A tune such as “Señor Mouse” represented the best at what these musicians as a group can do when you consider the high level of intensity, technical wizardry, and perfect timing under the jazz-rock umbrella. Corea, Gambale, Ponty and Clarke all through in their distinctive solo touch. A careful listener might have identified a very subtle touch of french folk melodies in Ponty’s part.

Stanley Clarke led the way with a strong dose of funk on “Sorceress.” With the intense bass playing, he was waving his hands at the end just like a student who had just written a 3-hour exam nonstop. Of course Clarke is no student and never ceases to impress at his mastery of the bass. He switched to upright bass for the rest of the show when Jean-Luc Ponty introduced his composition, “Renaissance.” At one point in his solo, he turned to Ponty inviting him to join him while pushing him musically in the process.

Ponty opened Rodrigo’s “Concierto De Aranjuez” before being joined by Corea and eventually the band settled on “Spain.” The audience was right with him as they chanted any bar that he played on the keyboard.

Fans were yelling out requests for the encore and the RTF closed this great show with another favourite, “School Days.”
On this busy night, fans also had a chance to see The Bad Plus over at the Enwave Theatre and Los Lobos for the Mainstage Concert. It is hard to believe that the half-way point has been reached.