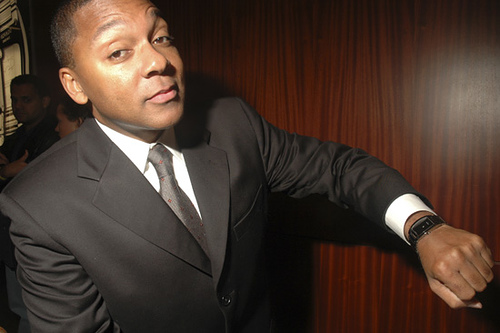 MARSALIS WILL CONTRIBUTE TO “CBS THIS MORNING” AND “CBS SUNDAY MORNING”

Wynton Marsalis, internationally acclaimed musician, composer and educator, has been named Cultural Correspondent for CBS. It was announced today by CBS News Chairman and 60 Minutes Executive Producer Jeff Fager and David Rhodes, President, CBS News. In this role, Marsalis will provide insight into a broad range of cultural and educational developments on CBS THIS MORNING and CBS SUNDAY MORNING. His first CBS News appearance will be on Monday, Jan. 16, 2012, as the nation observes Dr. Martin Luther King, Jr.’s birthday.

“Wynton Marsalis and CBS News have a strong connection that goes back many years,” said Fager. “His appearances on 60 Minutes, including his part in our tribute to the great Ed Bradley, were memorable, and the beautiful sounds of his trumpet adorn the network every single week with the fanfare that opens SUNDAY MORNING. Now our viewers will benefit from a regular dose of his insights and observations about American culture.”

“The world already knows Wynton as a virtuoso,” said Rhodes. “Less well known is his passion for education, for bringing together young and old, and for American culture in general: a passion he’s developed traveling across the country and the world over the course of his storied career.”

“Walter Cronkite was a jazz fan and a drummer,” commented Marsalis. “Ed Bradley was a mentor and treasured friend. I was an unabashed lover of Charles Kuralt’s vision of America from the road and Dr. Billy Taylor’s jazz segment on SUNDAY MORNING inspired us all. I am honored to be a part of the CBS News family. I look forward to sharing with viewers the incredible variety and richness of our national culture – from ballet to the blues, from barbecue to the backbeat.”

Few people have made as wide or deep a mark on contemporary culture as Wynton Marsalis. Celebrated for his contributions as a performer, composer, bandleader and educator, Marsalis has won nine Grammy Awards, is the only artist in history to have received Grammys for five consecutive years and is the only artist to have received a Grammy for both jazz and classical music in the same year (1983).

As a performer, he has toured 30 countries around the world and made more than 70 recordings – including three Gold Records. These recordings feature his trademark swinging style and inclusive approach to jazz. A passionate admirer of classical music, Marsalis has also recorded a number of classical works as a trumpet soloist and has performed with a variety of orchestras, including the New York Philharmonic, Los Angeles Philharmonic, Boston Pops, Toronto Symphony Orchestra and London’s Royal Philharmonic.

As a composer, Marsalis has consistently broken new ground. His 1997 “Blood on the Fields,” was the first jazz composition to win the Pulitzer Prize for Music. Other notable works include “All Rise” (1999), “Congo Square” (2006), “Abyssinian 200: A Celebration” (2008), “Blues Symphony” (2009) and “Swing Symphony” (2010). He has also composed works for The Chamber Music Society of Lincoln Center, as well as for some of the world’s leading choreographers, including Twyla Tharp, Peter Martins, Judith Jameson, Savion Glover and Garth Fagan.

He has given generously of his time and talent to students of all ages, conducting master classes, music lessons for countless individuals, and lectures at a wide variety of institutions. He also wrote and hosted an educational series, “Marsalis on Music,” which debuted on PBS in 1995. That same year, National Public Radio began airing his 26-week radio program, “Making the Music.” For these two outstanding expositions of jazz music, Marsalis won a George Foster Peabody Award. In addition, he has authored or co-authored a number of books, including Sweet Swing Blues on the Road (1994), Jazz in the Bittersweet Blues of Life (2001), To a Young Musician: Letters from the Road (2004), Jazz ABZ: An A to Z Collection of Jazz Portraits (2005) and most recently, Moving to Higher Ground: How Jazz Can Change Your Life (2008). In the spring of 2010, Marsalis launched a multi-year lecture series at Harvard University to convey the importance of cultural literacy to America’s future leaders and to illuminate the relationship between American music and the American identity.

Marsalis began performing at the age of eight. At 14, he performed with the New Orleans Philharmonic, and during his high school years he was performing with the orchestras and jazz bands around his New Orleans. At the age of 17, he was the youngest musician ever admitted to Tanglewood’s Berkshire Music Center, where he received the Harvey Shapiro Award for outstanding brass student. The following year, he moved to New York City to attend the Juilliard School, and soon afterwards began performing at venues around the city. In 1980, he joined Art Blakey’s Jazz Messengers, and in 1981 he formed his own band, spending the next 15 years on the road, performing more than 120 concerts a year and working with jazz legends such as Dizzy Gillespie, Clark Terry, Sweets Edison, Sarah Vaughn, Herbie Hancock and Sonny Rollins.

Marsalis’ extraordinary contributions to the arts and education have earned him more than 25 honorary degrees from some of America’s most prestigious universities and colleges including Harvard, Princeton, Columbia, Howard and Yale. Other distinctions include The National Medal of Arts; The New York Urban League’s Frederick Douglass Medallion for distinguished leadership; the American Arts Council’s Arts Education Award. He has received accolades from the Netherlands, France, Spain and Great Britain, and in 2001, United Nations Secretary-General Kofi Annan appointed him a UN Messenger of Peace.

Marsalis continues to tour the globe as a performer, conductor and lecturer.