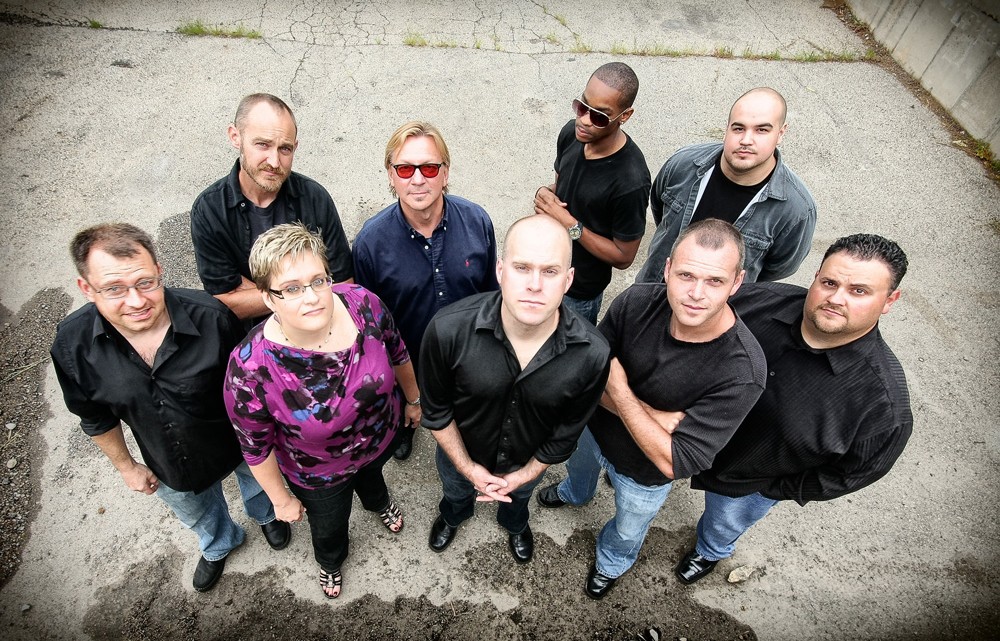 Available Digitally, on CD, and Blu-ray, ‘Live at the High Noon’ Is the Group’s First Live Album
75-Minute Concert Includes Exuberant Rendition of “Jupiter” by Earth Wind & Fire
Group Includes Oscar-Winning Arranger & Jazz Pianist Tim Whalen
Madison, WI: As a group of University of Wisconsin-Madison music students who banded together in 1996, Phat Phunktion have built a loyal following of listeners throughout the United States and around the world. Combining the polish of Top 40 with the smooth feeling of 60’s soul and the raw groove of 70’s funk, Phat Phunktion is a nine-piece tour-de-force that are one of the most revered live acts of the past 20 years. In their hometown of Madison, they have been known to attract crowds of 5,000 people and regularly sell out wherever they perform.In 2003, Rolling Stone singled out Phat Phunktion as a “band on the rise.” During the same year, they won a Wisconsin Area Music Industry Award, or WAMI, for “Best R&B Band.” In May 2003, a panel of Billboard Magazine judges selected the band as one of six acts to perform at the DiscMakers’ Independent Music World Series, Midwest regional final, where they funked up the Elbo Room in Chicago. Of the six finalists, Phat Phunktion and Chicago’s Orbert Davis took top honors. The band has appeared numerous times at the Madison Blues Festival, Milwaukee’s Summerfest, and the House of Blues in Chicago, with a myriad television and radio appearances to their credit, including “The Jenny Jones Show” and Michael Feldman’s “Whad’ya Know?”

In 2004, Ben and Leo Sidran’s Nardis/Liquid 8 label released their third CD, You and Me. Since then, You and Me has generated substantial interest at home and abroad. In America, 10,000 CDs have been sold to a devoted fan base via word-of-mouth and Internet sales. In Japan, large sales spurred a re-release of the disc on the Japanese label, Groovetime Records. In Europe, the record was played on radio stations throughout Italy and Spain. In 2004, JazzTimes reviewed You and Me, exclaiming, “Phat Phunktion has a horn-driven sound that draws inspiration from ‘70s funk, and on ‘You and Me,’ the band’s first release on a national label, producers Tim Whalen and Al Falaschi demonstrate a talent for crafting strong, danceable tracks…. Musically, the album is first rate.” In 2005, You and Me received the Madison Area Music Award (MAMA), for “R&B Album of the Year.”

During the summer of 2005, Phat Phunktion embarked on their first U.S. tour. Following the Nardis release of You and Me, the tour was a turning point for this award-winning band. As keyboardist / co-founder Tim Whalen said at the time, “We are not just a local band anymore.” From June 2005 until August 2006, the band played non-stop at festivals and clubs all over the United States, from Arizona to the New England seaboard, and everywhere in between. They brought the house down at the Bele Chere Music Festival (Asheville, NC), the Riverbend Festival (Chattanooga, TN), Riverfest (Little Rock, AK), the Art Tatum Jazz and Heritage Festival (Toledo, OH), The Knitting Factory and BB King’s in New York City.

Over the last 10 years, the band has shared the stage with musical legends, The Temptations, Tower of Power, WAR, Cameo, Morris Day and the Time, The Original “P” (featuring original members of Parliament), The Average White Band, Chick Corea, Taj Mahal, Rick James, Clyde Stubblefield, The Brothers Johnson, Soulive, Umphrey’s McGee, Willy Porter, and Kool and the Gang. Their dynamic stage show and incredible musicianship have initiated thousands of faithful “Phatheads,” who are spreading the word.
Individually, the band members have achieved worldwide notoriety and acclaim. Saxophonist Falaschi arranged and composed music for legendary James Brown drummer, Clyde Stubblefield, for his album, The Original, and appeared as a member of the “Sad Sax” collective that augments Bon Iver’s 22, A Million. Frontman Whalen also contributed to Stubblefield’s album, writing music for “Hippest March Part 2,” though he is most well-known for orchestrating strings for “Al Otro Lado del Río,” a song by Uruguayan singer Jorge Drexler that appears in the film Motorcycle Diaries, starring Gael García Bernal (Babel, Bad Education, Mozart in the Jungle). Otro Lado won the Oscar for “Best Original Song” at the 77th Academy Awards in 2005.

Riding this momentum into 2006, the band found themselves on a sold-out tour of Japan, with the local press hailing Phat Phunktion as the “new Tower of Power.” In 2011, they released their fourth album Real Life .:. High Fidelity, a blazing collection of 11 original songs that showcase a band that has truly found their sound. Something Else! compared High Fidelity to best of The Meters, exclaiming, “A good head shakin’, rump bakin’ groove, and lyrics that mix sunny messages with calls to party. And, for good measure, exclamatory blasts of brass.”

As the nonet continues its second decade of melting minds with its incendiary live show, the members felt it was time to reward fans with a testament to their electrifying onstage chemistry. Gathering before a raucous sold-out show at the High Noon Saloon in Madison, WI, on October 7, 2016, Phat Phunktion unleashed a blistering 80-minute set to rapturous applause. Stand-outs include the booming “Whatcha Gonna Do,” the funky boogie of “Knockin’ em Down,” a transcendent 8-minute version of “Rock Star,” and a show-stopping rendition of “Jupiter,” the Earth Wind & Fire classic. Produced by Whalen and Falaschi, the 13-track collection, “Live at the High Noon,” will be available worldwide on June 2, on CD, as a digital download, and on Blu-ray, in High Definition.

QUOTES:
“A talent for crafting strong, danceable tracks.” JazzTimes
“Horn-driven tour-de-funk by a band on the rise.” Rolling Stone
“They are quite simply the best dance machine to roll through the river city in a while.” Huntington Herald-Dispatch
“I was having Tower of Power flashbacks. Since 1976, I’ve been asking myself the cosmic question: ‘What is hip?’ Well now I know: Phat Phunktion.” Chattanooga Times

Previous post Jazz at Atlas Debuts in Newburgh, NY with William Parker and Evidence Of Everlasting Beauty -- May 20 at 8 PM