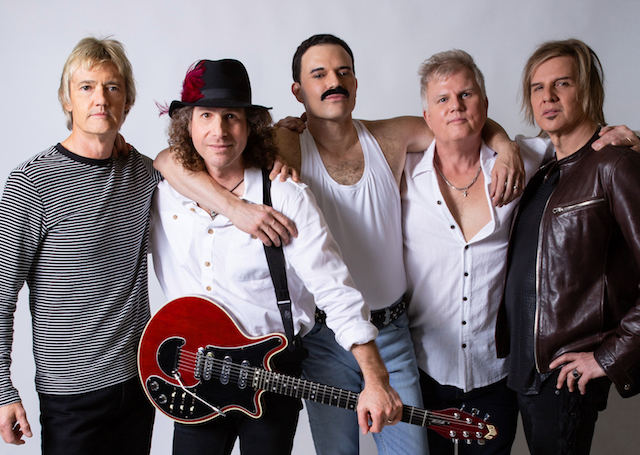 Kicking off September10 in IA, the U.S. tour will have the group crisscrossing the country to perform at some of the nation’s most iconic theaters, festivals and events including sharing the stage with Billboard-topping rocker Bret Michaels of Poison at the Tennessee Soybean Festival September 11 in Martin, TN.

The group’s high-energy performance includes a wide range of songs from Queen’s entire catalog and includes multiple costume changes by Paulie Z to showcase Freddie Mercury’s iconic outfits throughout the years. BQ’s passion, talent and love for the music is matched only by their expertly-produced shows and sophisticated performances, which can be seen in their latest video (view video here: https://www.youtube.com/watch?v=4JnGj3hghQ8).

According to Paulie Z, the band “formed during the early days of the Pandemic as a fun way to collaborate and connect musically and personally at a time when everyone was feeling so isolated.”

“We truly believed Freddie’s words that ‘The Show Must Go On’ which is why we feel it’s important to remind others that no matter how tough it gets or how lonely we all feel, we have to keep going.”

Paulie Z knows about pushing forward. His brother David Zablidowsky, better known as David Z, tragically died in a roadside accident in 2017 while on tour with Adrenaline Mob. Before joining Adrenaline Mob, David had been the bass player for the popular Trans-Siberian Orchestra. Along with his brother Paulie, the two had been a part of the power trio ZO2 and starred in their own TV series “Z Rock” on the IFC network.

Paulie and David, also known as “The Z Brothers,” were very active in developing young people through music and to continue the legacy, the David Z Foundation was created to raise money for music education in David’s memory. Its latest initiative is a new partnership with the Greater Susquehanna Valley United Way to bring an after-school program called the Music Mentor Program to the Central PA region. The program is designed for at risk students and will focus on channeling the students’ emotions into original songwriting and music video production.

The official tour dates for BOHEMIAN QUEEN are as follows:

Previous post Celebrated Artist Efrat (aka Efrath Shapira) Seeks To Convey Message of Love, Hope, And Empathy With The Release Of Her Inspirational New EP We Just Need Love