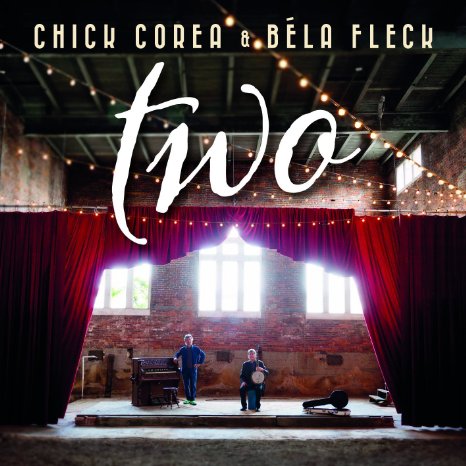 Jazz enthusiasts, loyal and passionate listeners as they are known to be, may assert that a decade or a specific style, such as swing or bebop, defines the golden age of jazz. But continuously accumulating, ground-breaking recordings by superlative musicians are establishing the fact that we are living in another golden age of jazz. Two provides more evidence of that fact.

Still discovering new possibilities as they investigated new opportunities in jazz for their instruments, Chick Corea and Béla Fleck, mutual admirers, decided to explore what would happen when they combined their instruments in a duo recording, much as Corea and Gary Burton did during their 1972 Munich concert, which culminated in their Crystal Silence album. The combination of piano and banjo, of course, was magical—the result of the mutual understanding of musical personalities documented by Corea and Fleck’s 2007 album, The Enchantment. So enchanted were listeners by this powerhouse duo—both of them irrepressible, lightning fast in their responses and technically astounding—that The Enchantment led to years of touring before thrilled audiences. Now their one joint album has been joined by two more, comprising the musical package of Two.

Two consists of live tour performances, the best of the best. The audiences’ enthusiasm is palpable, and the musicians’ inimitable spontaneity is unmistakable. That’s the goal of Two: to allow as much as possible for listeners, in addition to those attending the live performances, to experience the substance of not just their playing, but of music itself. In the liner notes, Corea writes about the futility of what I am doing—writing about music. Those enchanted by the art form understand music’s ineffability. Music just is. Corea writes this: “…music can’t be explained. [Description] would be so much explanation of something that loses its substance when you try to explain it.”

So why write if it’s an exercise in futility? Write so that others can become aware of this music that defies description.

Two’s performances involve mostly Corea’s and Fleck’s compositions, all but two of which (“A Strange Romance” and “Bugle Call Rag”) were included in The Enchantment. Unlike Corea’s three-CD album of live trio performances, Trilogy, Two includes no information about where and when the performances occurred. The artistic intensity of both albums draws in listeners with their force, spontaneity and, yes, humor. Both Corea and Fleck have fun before audiences. Audiences respond. The fun intensifies. Corea and Fleck capture the hearts of the audiences. That soulful communication is what can’t be described. It’s there in Trilogy and in Two.

Fleck, the worrier and the fastidious preparer, was concerned about performing jazz with Corea because, as Fleck wrote, “I don’t have an understanding of [jazz] harmonies.” The laid-back, in-the-moment Corea responded, “Let me worry about that part.” And so, the unexpected track, the let’s-do-it-and-see-what-happens track, “Bugle Call Rag,” involves fun as an art form. Instead of Corea worrying about jazz harmonies, Fleck takes the lead and Corea follows his venture into bluegrass. As the two exchange lead and accompaniment throughout the track, Corea, sly as ever, interprets the rag as stride and injects recognizable quotes from not only Thelonious Monk, but also from Chick Corea. In the process, Fleck elicits new ideas from Corea not previously recorded. Brave musicians they. As brave and original as Monk or Scruggs. The audience appreciates the fun, erupting into applause as spontaneous as what they heard from the stage.

The spontaneity continues undiminished. In different venues. On different dates. On “Joban Dna Nopia,” the listener can hear how Fleck energizes Corea, who knows what to expect from previous duo performances and who yet doesn’t know what to expect from the instantaneousness of the bursts of inspiration. Virtuosity fortunately recorded for enjoyable documentation, Fleck’s solo—an instance of unparalleled technical exceptionality—intensifies. As the tension increases to a final breaking point, and as Corea follows what he knows is a special moment, the audience claps in the realization that such trail-blazing talent is what they came to experience.

Delicacy occurs too. Piano and banjo develop in straightforward fashion during the performance of Henri Dutilleux’s “Prelude en Berceuse” as Corea and Fleck exchange the music-box-like melody. Less metronomic, more abstract and haunting is Corea’s “Children’s Song No. 6” from his 1983 Children’s Songs album. Complex and demanding extraordinary musicianship, Corea’s introduction itself represents yet another astounding example of his inimitable technique. Impressive among all of the tracks is the way that the melody, the spare-at-times harmony and especially the rhythm hold together from just piano and banjo.

Two masters of their instruments, Corea and Fleck, obviously passionate about their music, never allow it to lag. The silences within their performances nonetheless remain charged with unheard pulse or edge-of-seat expectation as the release of tension or the fulfillment of harmonies, perhaps sparely sketched, happen. “Brazil,” not exuberantly celebratory, instead is played with professional ease and confident relaxation. The melody is performed in punchy segments at times with little need for constant chorded accompaniment. Still, the musicians recognize the audience’s anticipation of a memorable moment, and at mid-performance Corea and Fleck rise in improvisational intensity before settling again into pointillistic calmness.

After receiving the green light for production of the album, Corea relied on Fleck to choose the live performances from their years of touring. It’s evident that Fleck selected the ones that united the musicians and the audiences in constellations of pure communication that words can’t describe. Without being there, we can still participate in the Corea/Fleck concert experiences from Two.

Be aware. Two is a must-have album for fans of Chick Corea and Béla Fleck. It captures their spirited on-stage telepathy in their most memorable on-tour performances. Two provides another reason to be glad we’re living in this generation’s golden age of jazz.

Next post Anat Cohen Kicks Off NPR's Toast of the Nation 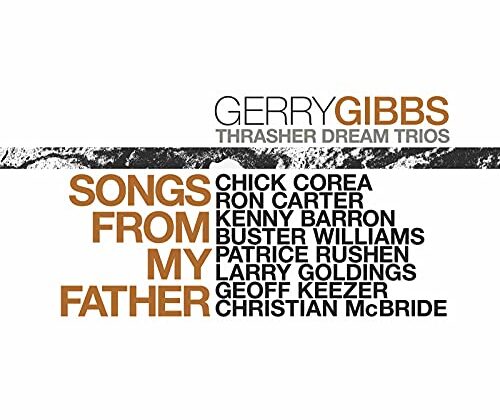