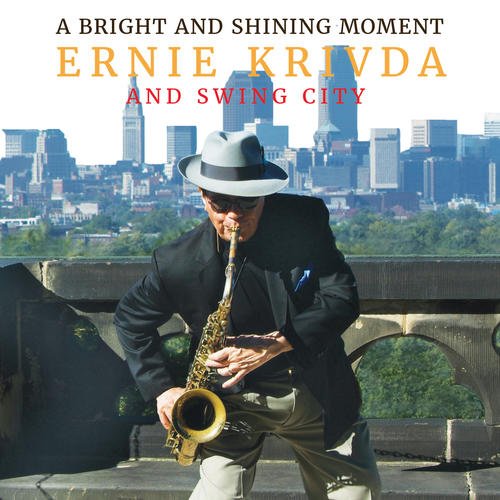 Cleveland, Ohio saxophone legend Ernie Krivda cleaned out his basement and found a forgotten recording that brought back overpowering nostalgia for previous times, like the experience brought on by Marcel Proust’s madeleine cake in Swann’s Way of Remembrance of Things Past. Similarly, Krivda’s initial experience with an object from his past blossomed into a complex work that captures the importance of his things past. Such as his new album, A Bright and Shining Moment, which features the Swing City Band. That band’s original recordings at Suma Recording Studio and on the main stage of the Tri-C Metro Campus, relegated later to basement storage, present the superbly performed jazz band music in Cleveland in the late nineties and in the early millennium.

Due to the multitude of remembrances that A Bright and Shining Moment activated, Swing City Band leader Krivda wrote detailed, expansive liner notes (28 pages long, with quotes, historical photographs and Swing Band promotional posters). Perhaps Krivda intended to document the band’s music, but he also may have intended to make yet another statement about the distinctive sound of Cleveland’s jazz scene. Krivda knows both sides of jazz recognition, for he moved to New York City in 1976 to receive the attention of a record label. But then Krivda returned to build a foundation for the continuation of jazz in the city that produced internationally recognized names like Joe Lovano, Dominick Farinacci and Sean Jones. That contrast between local appreciation and international recognition highlights the under-reported value of regional artists and regional sounds. While a widely known jazz professional like Maria Schneider or John Beasley may greatly increase awareness of their talent by moving to New York City or Los Angeles, jazz professionals remain in less media-centric regions like Minnesota or Louisiana where they provide brilliant unrecorded ideas nightly in local venues.

Such was the case with Krivda. He got his start by leading the house band in the local Cleveland club, the Smiling Dog Saloon, where jazz icons like Herbie Hancock or Elvin Jones performed. Krivda leveraged that experience with jazz icons to install a love of jazz in students at Cuyahoga Community College, where he eased into the role of jazz educator as Gary Burton did at Berklee or David Baker did at Indiana University or Jackie McLean did at the Hartford Artists Collective. And from his Tri-C educational leadership unfolded Krivda’s creation of the Swing City Band, its name a reinforcement of Krivda’s belief of jazz’s ability to connect with the soul and to encourage dance and swing.

A Bright and Shining Moment, eighty minutes in length, consists of three restored recordings from 1998 to the band’s last performance at the college’s Tri-C Metro Campus in December, 2002. Fortunately, Krivda couldn’t bear to part with the recordings, allowing him, and us, to hear the music two decades later as if it were recently performed.

The album combines Krivda’s arrangements of covers with his own compositions, none more prescient than the title track. The music indeed describes an experience like the “one brief shining moment that was known as Camelot” when the stars align. With seamless ease, a perfect unison statement of the melody, swelling and contracting dynamics, and, yes, inviting swing and sway, “A Bright and Shining Moment” builds upon bassist drummer Rick Porello’s “Sing Sing Sing”-like tom tom pattern to provide an upbeat showcase for Krivda’s distinctive tenor sax growl and groove, not to mention the late trombonist, Gary Carney’s, exciting trombone solo, backed by muted trumpet accents reminiscent of early jazz bands. In contrast, Krivda’s “Roses” slows things down to allow trumpeter Steve Enos to develop a fully developed interpretation of the slow-dance-like melody associated with the music of Hoagy Carmichael.

In fact, a quarter of the album’s 16 tracks were written by Carmichael, newly arranged for a Carmichael tribute concert, while most of the others were written by Ellington or Gershwin. Even though many are familiar with these composers’ songs, Krivda doesn’t fail to create a new angle for hearing them anew. For instance, Carmichael’s “In the Cool Cool Cool of the Evening”—rarely heard any more, perhaps because it was performed usually by singers who now have no interest in it—includes a back-and-forth introduction and a repeat section performed by a single musician over accompaniment, as well as a punchier rhythm of sixteenth notes.

As for Gershwin, the Swing City Band provided the unexpected when guest singer Marshall Baxter Beckley made the song her own with trills and guttural swoops and a spoken recap and a re-fashioning of the melody, the listener then realizing that she should have attained more attention during her lifetime. Gershwin’s “The Man I Love” combines the inveigling comfort of Enos’s trumpeted beginning with the jump rhythm of the faster middle section. While it would be expected that Ellington’s “Caravan” featured colorful drumming, what’s unexpected is Krivda’s arrangement of Lee Bush’s guitar and Hunter’s accents and vamp to frame up-tempo, and yes—swing—solos. The septet’s sultry version of “The Mooch” features its ability to harmonize and again to use dynamics to exhilarating effect, particularly during Chris Anderson’s trombone solo.

The song that doesn’t fit into the album’s compositional pattern is “Dream of Life,” arranged by drummer John Bacon and written by none other than singer Carmen McRae, along with Luther Henderson. Its written alteration of the melody with variations leads into successive solos appropriate to the big band-ish feel of harmonized movement, a commendable accomplishment for a smaller band.

Even though Cleveland’s Swing City Band is no longer extant except in memories and now on this recording, it’s still possible to hear Ernie Krivda in live performances and on his recent recordings. It’s also still possible to enjoy the results of the jazz musicians/collegiate partnership during Cleveland’s annual Tri-C Jazz Fest. Cleveland’s jazz scene moves into the future, as does the revitalized city, even as occasional local performances cause remembrance of Cleveland jazz things past.

Next post CD Releases: Grant Green, Slick! Live At Oil Can Harry’s and Funk in France