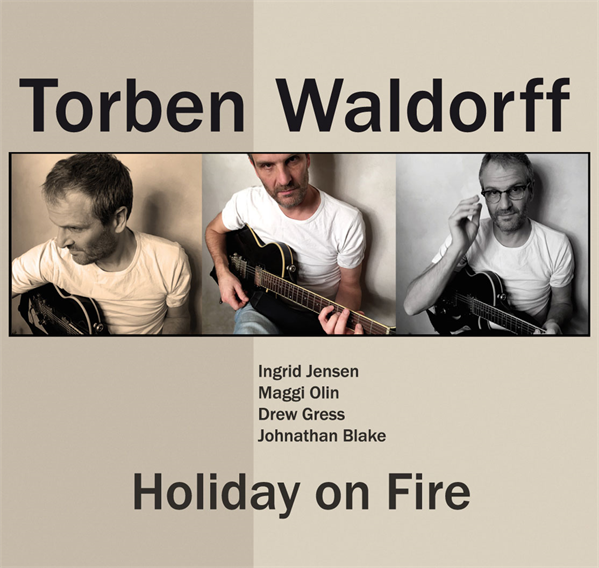 Scandinavian guitarist Torben Waldorff has enjoyed a mutually beneficial relationship with ArtistShare for ten years. The label was founded in 2003 as a pioneer in crowdfunding for jazz artists while entertainment producers were still trying to sort out the transition from corporate contracts to artists’ self-promotion. Now ArtistShare can enjoy the benefits of recording an international jazz musician without the necessity of the label’s being based in Europe. In turn, Waldorff, though living in Denmark and Sweden, can leverage the distribution by an internationally recognized label that offers tips for funding while also marketing quality products for well-known artists like Maria Schneider and Robin Eubanks. Waldorff continues to expand his ArtistShare discography with the recent release of Holiday on Fire, a collaboration with friends/musicians who got together in Brooklyn (New York, USA) to perform for posterity Waldorff’s compositions written specifically for the group.

It’s often written that the tenor sax or the trombone possesses personal sounds reflective of the musicians who play them due to their resemblances to the human voice. Just as obvious, but maybe less observed, are the individualistic sounds that guitarists achieve as well. Jim Hall sounds nothing like John McLaughlin; Mike Stern, nothing like Charlie Byrd; Jimi Hendrix, nothing like Django Reinhardt. That extension of personality through the guitar extends to Waldorff too. For his is a sound that leaves lots of space without extremes of volume or the overworking of effects. Rather than assuming the accompanist’s role, Waldorff consistently interacts with his band members, many of whom he met during his student days at Berklee or during jazz events in Europe. In essence, Woldorff’s sound is meant to blend in that of the others in his groups.

Holiday on Fire is an album that recalls a set within a nightclub, complete with introduction, build-up to the showpieces in the middle and then a final tune that summarizes the performances preceding it. The musicians get to take advantage of final opportunities for expanded improvisation before the music ceases.

The introduction: Waldorff’s dedication to the personalities of the musicians within the Holiday on Fire quintet, “Thyst Intro,” begins at the start of the album, which features a subdued duo improvisation consisting of trumpeter Ingrid Jensen and pianist Maggi Olin. So subdued and spare is the track that Jensen’s declaration with brief phrases and much pausing abandons traditional trumpeted sonority for a purity of sound accompanied by Olin’s very few treble notes. While Waldorff’s previous ArtistShare albums have included bassist Matt Clohesy and tenor saxophonist/fellow Berklee graduate Donny McCaslin, Holiday on Fire instead adapts Waldorff’s group sound from his work on Olin’s album, Dreams, on which Jensen performed and which he co-produced for his Swedish musical associate. The result is indeed a new group sound that includes Waldorff’s recognizable presence as the touchstone connecting all his albums.

After that suggestion of music to follow, Waldorff takes command as the eerily melodic center of his full-fledged composition, “Thyst.” That piece consists of long tones in a minor mode as drummer Johnathan Blake energizes the tune’s undercurrent, creating a tension of the double-time feel, Waldorff pulling as Blake pushes. “Combust” continues Waldorff’s investigations into unconventional harmonic movement as he asserts slowly his four-note motif, rising in three keys and becoming the occasion for intensifying improvisation after Olin takes over the chorded upsweep on the Fender Rhodes. Oddly enough, Jensen remains restrained with her muted quietude as an embellishment to the main improvisation, instead of taking the lead.

“Our Sound of Love (and Charles’s and Duke’s)” offers a more traditional sonic composite consisting of Olin’s sketched interchange with bassist Drew Gress, the volume and balladic development creating inviting attentive listener engagement before Jensen and Waldorff enter to present the piece’s final choruses with modal heightening of emotion. On “Off to Far,” Jensen plays without mute and with more authoritative extroversion while Waldorff, in unison performance, adds slight distortion before his soaring improvisation in a meter of three. As with most of Waldorff’s performances, his deceptively subdued starts grow in intensity as more musicians join in and as the fervor grows, this time over “Off to Far’s” three tonics that govern the solos. Speaking of tonics, for which Waldorff seems to have a special affinity, the next tune is aptly named “Ironic Tonic,” which features Olin on Rhodes as the meter veers vertiginously between seven and four over shifting tonics in a two-note phrase initially similar to that of “Summer Samba’s” beginning. “Ironic Tonic” concludes with sustained notes of varying timbres while Blake stirs up the force without restraint suggested by the implicit energy of the other musicians.

The ending: Holiday on Fire concludes with the extended explorations of “Belligerent Beauty’s” theme, modal in construction to allow freedom of interpretation. Then the performance slows down, signifying the finish of a live set as well by these like-minded multi-national musicians.