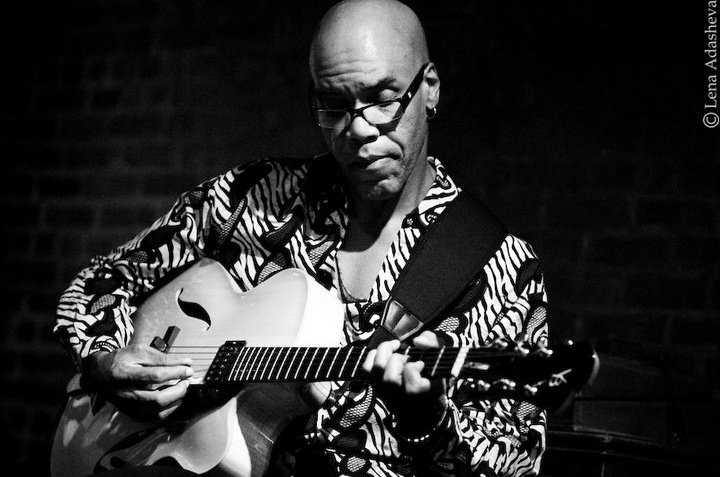 “An expressive instrumentalist, Cherry has a hip, melodic approach that is a refreshing contrast to guitarists who frequently resort to playing ‘finger music’, the execution of rapid streams of notes that serve no musical purpose other than to fill space”- Jim Ferguson: Jazztimes – 06/02

“But this album’s ace in the hole is guitarist Ed Cherry. “Blues drenched” is not a cliché when applied to Cherry. Every time he solos, a rapt calm descends and a timeless story begins, familiar yet still a revelation when told with blues truth.” – from 10/9/12 JazzTimes review of virginia mayhew recording: “mary lou williams-the next 100years”

Recently I have heard you featured on WBGO and really took note… Great Expression, Ed… I Hear You, not just good jazz guitar or good musical vocabulary but you… That is a Deeper Accomplishment as far as I am concerned… when Who you are Speaks through the skill and development… Thank you

In 1995, Cherry released his second project as a solo artist, entitled A Second Look (Groovin’ High).During that same period Ed worked with Hammond organist John Patton recording 3 critically acclaimed cd’s with Patton’s quartet-‘Blue Planet Man’,’Minor Swing’ and ‘This ones for Jah'(DIW). From 1997 to 1998, Cherry worked in Roy Hargrove’s “Crisol” Latin jazz band, which performed Havana, Cuba.During this same period,he also worked w/baritone saxist Hamiett Bluiett,recording Bluiett’s cd ‘with eyes wide open’ on justin-time records.In 2001, Cherry toured Europe for the first time with his own group. He also released his latest CD, The Spirit Speaks on the Canadian Justin Time label, inspired by the great jazz organist Jimmy Smith with whom he had also recently worked.Ed was asked to perform at the ‘Vodaphone Madarao Jazz festival’in 2002 in Madarao Japan with his quartet featuring trumpeter Jon Faddis.

In 2003 Ed performed with his quartet at Detroit Jazz Festival.  Right now,Ed is a member of vocalist Paula West quartet as well as leading his own trio. In addition to his stellar work as a sideman and as a critically acclaimed leader, Ed Cherry also has impressive credentials as a music educator. He taught guitar at Essex Community College in Newark, NJ from 1995 to 1996, and at the Henry Street Settlement in New York City from 1996 to 1997. He was also a faculty member at Montclair State University, School of Fine and Performing Arts for J.O.Y. (Jazz Opportunity for Youth).Ed is currently on staff at ‘jazzmobile’ here NYC.     www.edcherrymusic.com