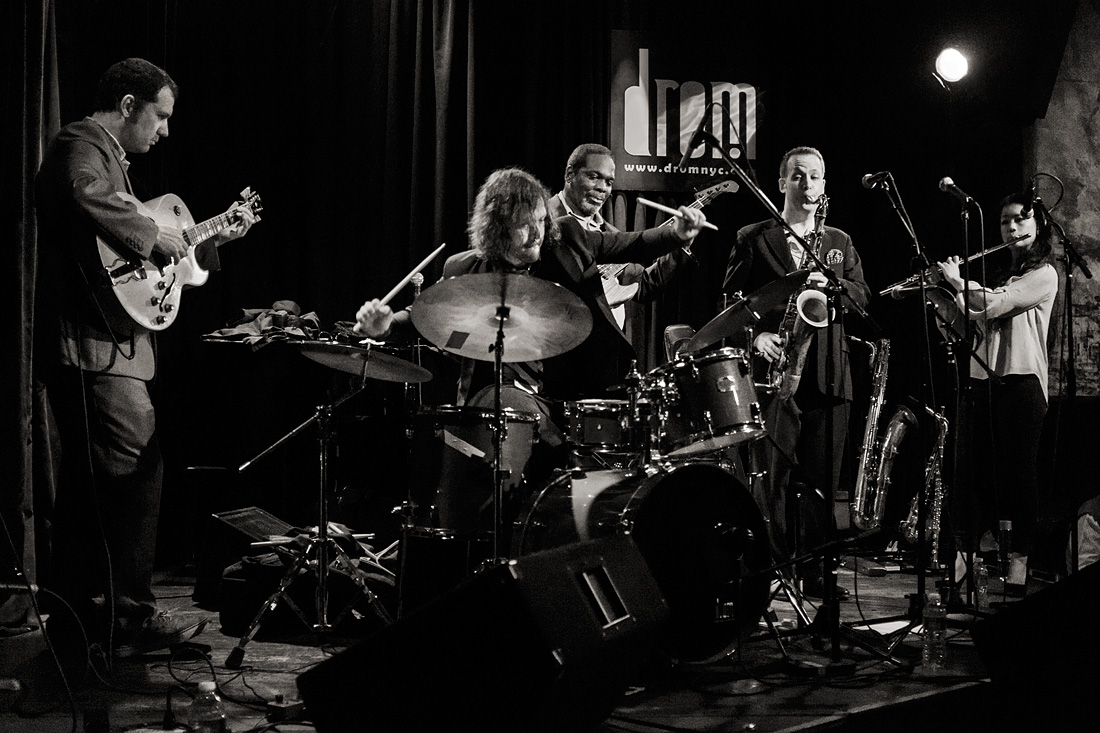 New York City, NY (FOR RELEASE 01.09.14) — The killer quintet EUPHORIA returns to DROM in a monthly concert series devoted to the work of NEA Jazz Master Foreststorn “Chico” Hamilton (1921-2013).  Described as “one of the city’s most buoyant combos (Time Out New York),” EUPHORIA digs into the repertoire of Chico Hamilton, playing old and new arrangements that capture the best of Chico’s legacy.

Comprised of Paul Ramsey (bass), Evan Schwam (saxophones, flute + piccolo), Jeremy Carlstedt (drums + percussion), Mayu Saeki (flute) & Nick Demopolous (guitar), EUPHORIA has built a chemistry under the direction of its veteran leader. “As his long-time ensemble, we’ve had the unique privilege to work intimately with Chico for several years,” explains Evan Schwam. “We strive to maintain Chico’s remarkable high standard of musicianship, groove and consistency. We’re thrilled to be sharing the essence of Chico’s spirit and we will keep it alive and swinging!”

Hamilton, who died November 25, 2013, at the age of 92, was busy composing, rehearsing and recording till his final days. His latest album “The Inquiring Mind” (Joyous Shout!) to be released 02/18/14 was recorded with EUPHORIA this past Fall 2013. Saluted by the Kennedy Center as a “Living Jazz Legend”, and appointed to the President’s Council on the Arts, Chico is considered one of the most important jazz artists and composers of our time. According to the New York Times, he’s “one of jazz’s great colorists and chamber-minded bandleaders.”

The New York City-based quintet EUPHORIA celebrates the music of the legendary composer/drummer and NEA Jazz Master Foreststorn “Chico” Hamilton (1921-2013). EUPHORIA has been capturing the essence of Chico’s spirit since its formation in 1989. It maintains its monthly concert series at NYC’s DROM and has appeared on 15+ recordings with Chico. EUPHORIA is comprised of Paul Ramsey (bass), Evan Schwam (flute + reeds), Jeremy Carlstedt (drums + percussion), Mayu Saeki (flute) and Nick Demopolous (guitar). www.joyousshout.com